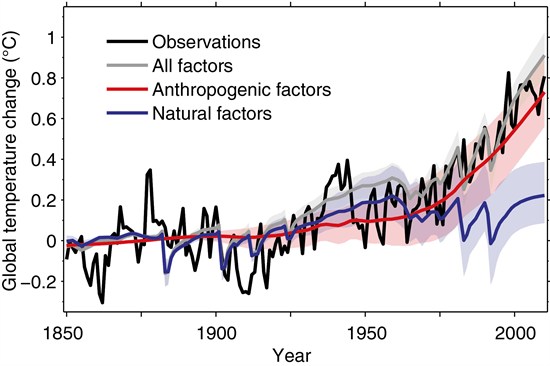 At least three-quarters of the rise in average global temperature since the 1950s is due to human activity, according to new research published in the journal Nature Geoscience.

Researchers using a new technique determined that since the middle of the last century greenhouse gas emissions would have resulted in a temperature rise of around 0.85 Â°C, although that potential temperature rise that has been partially counterbalanced by aerosols cooling the Earth, offsetting about half that amount.

Overall, temperatures have risen by around 0.75 Â°C since the start of the 20th century.

The Earth’s climate fluctuates all the time, changed by natural processes like volcanoes and solar activity, as well as human-caused greenhouse gas and aerosol emissions. These things which affect the climate, whether natural or man-made, are collectively called ‘forcings’.

To work out how much any one forcing – greenhouse gases, say – contributes to temperature change, scientists generally use a technique known as ‘optimal fingerprinting’. This involves using computer models to examine the effect of each forcing in turn.

Modellers can do the same for each of the other forcings in turn, and then perform statistical analysis on the results, which enables them to determine how much each forcing influences temperature compared to the others. (This technique does assume that temperature patterns are accurately simulated by the climate models.)

Based on optimal fingerprinting, the last report from the Intergovernmental Panel on Climate Change, (AR4, published 2007) concluded that:

We spoke with the paper’s lead author Prof. Reto Knutti, Institute for Atmospheric and Climate Science, ETH ZÃ¼rich, who explained what the team had done:

“Our method is based on a much simpler model that is run many thousands of times with different parameter combinations. Then we compare with the observed warming and ocean heat uptake for every simulation, and keep those that are consistent with the observations (note that deciding what ‘consistent’ means is not trivial). But that gives us a large set of parameter combinations constrained by observations. We can then run the model with each of those parameter sets with each forcing individually, e.g. only CO2. That gives us a best estimate and uncertainty for the CO2 contribution. Same with the other forcings.”

This alternative technique can be used alongside the earlier methods, he said:

“The fact that our results are entirely consistent with the optimal fingerprinting, but based on a different method, model and type of observation, is an argument for even higher confidence in human induced climate change.”

Other scientists working in the field welcomed the results as providing another scientific methodology which came to similar conclusions to previous work, increasing confidence in the results. Prof Piers Forster, Professor of Climate Change at the University of Leeds, said:

“It’s pretty convincing stuff: observations and the physical law of energy conversation have been used to show  greenhouse gases are responsible for global warming and that alternative scenarios violate this law of nature.  Previous proofs have relied on complex climate models, but this proof doesn’t need such models – just careful observations of the land, ocean and atmospheric gases.”

“This study confirms that, even when using different approaches, the observed warming seen over the last 50 years is dominated by man-made emissions of greenhouse gases.  With similar results from the Met Office Hadley Centre and other researchers elsewhere this is further proof that the observed temperature rise we have seen can be attributed to human activity.”