The main thrust of Neil’s argument was that efforts to reduce emissions should be relaxed because of scientific uncertainty on some technical issues, like what’s caused surface temperatures to rise more slowly in recent years and why climate models weren’t able to predict it.

But scientists were left frustrated on Twitter that the programme chose to discuss the minutiae of climate science with a politician – even a well briefed one. After an invitation from Neil himself, several scientists pointed out the factual errors and flawed arguments in the segment. Here’s our assessment of what they had to say.

Neil starts the segment with questioning the scientific consensus over what’s causing climate change, claiming a recent paper by Skeptical Science which found 97 per cent of papers on climate science agreed that humans are the main driver “misclassified 35 per cent of papers”.

For a bit more on why that’s not quite right, read this blog post from co-author Dana Nuccitelli. But as with any aspect of climate science, it’s maybe unwise to invest too much in one paper.

What Davey might have said in response is the evidence is now so strong that the Intergovernmental Panel on Climate Change (IPCC) says it’s at least 90 per cent certain human activity is responsible for most of the observed temperature increase since the 1950s, mainly through burning fossil fuels.

In a draft of the next IPCC report, due out in September, this conclusion looks set to be strengthened to “extremely likely” – which means at least 95 per cent certainty.

Neil goes on to talk about the fact that despite carbon dioxide continuing to rise in the last 15 years or so, surface temperatures – that’s the land and top of the ocean – have risen considerably slower than in previous decades.

The science community has discussed this slowdown in surface warming, and the specific reasons why it’s happening is an area of very active scientific research.

Neil’s argument – that this raises the possibility “something of a disconnect between carbon dioxide emissions and temperatures” – is based on the following graph, which he says is from the Met Office. The graph apparently shows surface temperatures from 1980 to the present and the atmospheric concentration of carbon dioxide. 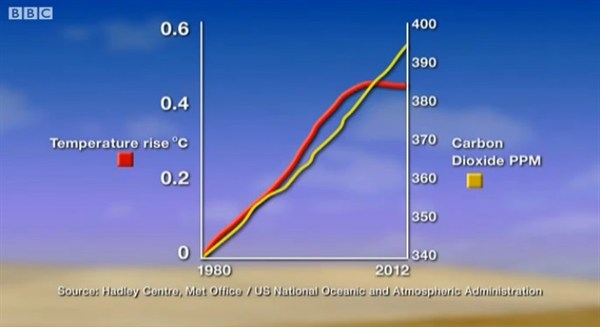 But Ed Hawkins, climate scientist at Reading University, tells us there are a couple of problems with the graph. He says:

“The graph shown in the interview … was supposedly ‘Met Office Hadley Centre’, but that is not true – they have taken the Hadley Centre data and smoothed the temperature data in a way which no-one can work out (and people – including skeptics – have been trying today)”

Suggesting the slowdown is “a bit of a puzzle”, Neil goes on to quote Met Office scientist Doug Smith as saying “It’s fair to say that the world warmed even less than our forecast suggested â?¦ We don’t really understand at the moment why that is.”

But Smith says he’s being misrepresented, telling us:

“In terms of my quote, this was taken out of context and misinterpreted. The fact that over a short period the real world warmed less than one particular model should not be interpreted as evidence that global warming is not happening or will be lower than the IPCC projections.”

Scientists are not puzzled by surface warming slowdown

Another thing Neil doesn’t mention is that periods of slow surface temperature rise aren’t particularly unusual. There have been several periods in the 20th century in which surface warming has slowed but over the course of the century, the overall trend is still one of warming.

Scientists tell us the likely reason for them is natural variability redistributing the sun’s heat into different parts of the climate system, notably the oceans.

In other words, the world is still warming – but less warming in one part of the climate system is balanced out by more warming in another.

Climate models are constantly being refined to better account for natural variability that redistributes heat around, but they are not perfect. Over the short term – a decade, for example – natural variability may lead to mismatches between model and observed temperatures.

Importantly, this doesn’t change the long term predictions of climate models for how temperatures will evolve by the end of the century. As Met Office scientist Philip Bett said on Twitter yesterday, short term variability and long term climate change projections are two different scientific problems.

So it’s important to take into account – as Davey points out on more than one occasion – that surface temperature is only part of the climate story. There are many other indicators of climate change which show little sign of pausing. Arctic sea ice is diminishing more rapidly than scientists expected, the ice sheets are melting and sea levels are rising. Atmospheric temperatures are just one small part, as the image below shows. These are just some of the bigger issues the scientists we spoke to said were handled poorly.

Neil also makes a number of other factual errors at various points in the programme, which scientists also took to Twitter to highlight.

One such example is his claim “the IPCC report says … most of greenhouse gas warming really kicked in after 1980.”  In fact, the IPCC’s last report in 2007 said:

An issue of framing

Although Davey appeared well-briefed on the science, as a non-expert he was ill-equipped to deal with the thrust of Neil’s argument – that efforts to reduce emissions should be relaxed because of scientific uncertainty on these rather technical issues.

As the Met Office’s Philip Bett – speaking to us in a personal capacity, not on behalf of his employer – puts it:

“The interviewer was asking questions about the science, which is fine, but he was asking a (well-briefed) politician. His questions were not invalid, but it would seem more sensible to me to ask policy questions to the politician, and science questions to a scientist.”

And the rather aggressive format of skeptic vs non-expert doesn’t allow for a reasoned conversation. Bett continues:

“[M]y concern was that Andrew Neil didn’t really seem interested in the answers or at least, not interested in developing his line of questioning on the basis of the answers â?¦ I expect that when people are presented with additional information, they change their ideas and what they are doing, and this goes for all research whether it is scientific or journalistic â?¦ [B]ecause the conversation was not allowed to progress on the basis of the answers, it was a lot less useful in communicating those issues than it could have been.”

Ed Hawkins tells us more about his thoughts on the programme:

“I don’t think the format is particularly helpful – it is deliberately designed to be combative, rather than sifting through the evidence to find the truth … It is all too easy to generate the false appearance of a real scientific debate by selectively quoting a reputable scientist out of context. This is almost impossible to counteract in such an interview.”

There seems to be a very simple way around a lot of these issues. If you want to have a sensible conversation about climate science, ask some climate scientists. Several even offered their services as interviewees yesterday, Let’s hope the producers of Daily Politics take them up on their offer sometime soon.