We’ve all seen the pictures of polar bears stranded on sea ice. They’re all too often used as the iconic poster animals of a rapidly changing climate. Yet every now and again, claims emerge in the media that polar bears’ plight might not be so serious after all.

Carbon Brief has dug through the literature and spoken to polar bear experts. While little is known about some remote polar bear populations, it’s clear there’s no scientific basis for such optimism. As temperatures keep rising, polar bears face a bleak future ahead, say scientists.

Polar bears’ primary habitat is sea ice. They use it as a platform to hunt seals. The map below shows the 19 different regions where polar bears live, extending across Arctic regions of Canada, Greenland/Denmark, Norway, Russian and the United States. All 19 subpopulations of polar bears have experienced some degree of ice loss. Overall, sea ice loss poses the single biggest threat to polar bear numbers, according to the latest and most comprehensive review to date. It concluded:

“Loss of Arctic sea ice owing to climate change is the primary threat to polar bears throughout their range… Our findings support the potential for large declines in polar bear numbers.” 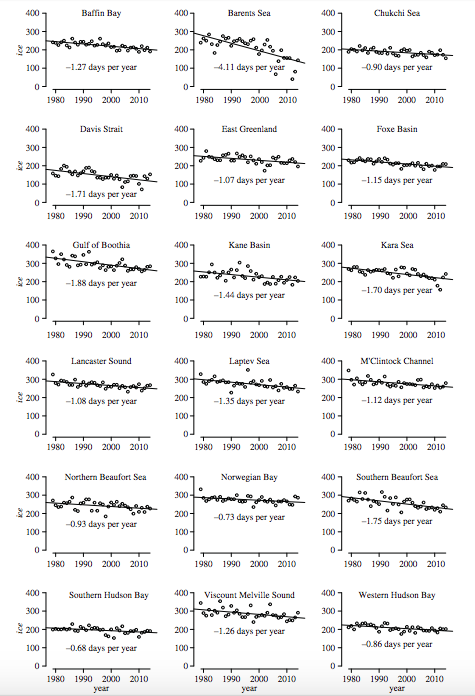 Every few years, the International Union for the Conservation of Nature (IUCN) publishes a “Red List” – an overview of the conservation status of threatened animal and plant species. The latest iteration, published in 2015, classifies polar bears as “vulnerable”, meaning they are facing a high risk of extinction in the wild.

Temperatures in the Arctic are rising at least twice as fast as the global average and sea ice cover is diminishing by nearly four per cent per decade.

The loss of sea ice affects polar bears’ ability to find food, studies show. Polar bears feed on ringed seals that live at the ice edge, getting two thirds of the energy they need for the entire year in late spring and early summer. With the ice retreating earlier in spring and forming later in winter, the bears have less time to hunt prey and have to go without food for longer.

Scientists have found this can result in a decline in body condition and lower average weight in adult females. Fewer cubs survive and the ones that do are smaller, research suggests.

While polar bears have shown some ability to adapt to changes in their surroundings – for example, by foraging for food on land – scientists project polar bears will become more food-stressed as sea ice diminishes and populations will decline.

“Without sea ice, there is no sea ice ecosystem and losing that ecosystem includes losing polar bears”.

There are other impacts of climate change on polar bears, too. Warming has been linked to increases in contamination and exposure to diseases. Unusually warm weather in winter can cause dens to collapse, which females build to birth and protect their young. Unusually warm weather in winter can cause dens to collapse, which females build to birth and protect their young. Creative Commons.

In the Southern Beaufort Sea and Western Hudson Bay sea-ice loss has been directly linked to past or present declines in the polar bear population. But elsewhere, other factors such as hunting, shipping, oil and gas activities, tourism, prey availability and successful conservation come into play to greater or lesser extents.

All of this makes for quite a complicated picture, says Dena Cator, coordinator of the Species Survival Commission at the IUCN. She tells Carbon Brief:

“More broadly, there are multiple factors – including but not limited to sea-ice change – that affect subpopulation trends.”

Based on the data available, the latest IUCN assessment said three polar bear populations are currently in decline: those in Baffin Bay, Kane Basin and the Southern Beaufort Sea.

After declining throughout the 1990s and early 2000s, polar bear numbers in Western Hudson Bay, probably the most studied subpopulation, are now thought to be stable, though considerably lower than 25 years ago. Polar bears in the M’Clintock Channel seem to be on the rise, albeit from much reduced numbers compared to the 1970s.

A recent study of polar bears in the Chukchi Sea, however, found they are not altering how they choose their habitat despite a decrease in sea ice, leading to a 75% loss in available habitat. Though currently listed as “data deficient”, further sea ice and habitat losses are likely to have consequences for the size of the population, say the authors. Overall, the IUCN estimates the total number of polar bears at 26,000, with only a 5% chance that it’s less than 22,000 or more than 31,000. But given several polar bear subpopulations are still unaccounted for and there is high uncertainty about the numbers that do exist, scientists are wary of trying to pinpoint the absolute size of the global polar bear population.

Instead, polar bear scientists use the best-available information to track the relative changes over time in the different subgroups. From that, they can estimate the likely changes happening across the population as a whole. Cator explains:

Scientists’ best estimate is that there’s a 70% chance the global population of polar bears will fall by more than a third within the next three generations.

According to IUCN criteria, this qualifies polar bears as “vulnerable”, reflecting the potential for large reductions in the global population as climate change and sea-ice loss continue. Prof Charlotte Lindqvist, an expert in polar bears and climate change at the University of Buffalo, tells Carbon Brief:

“[The data] shows a significant decline in sea ice throughout the entire polar bear range over the last 35 years, and if this trend continues…the future looks dire for the polar bear species.”

On the plus side, scientists think the risk of polar bear numbers dropping by more than half in the next 35 years is low (7%), while the risk of an 80% collapse is negligible. This keeps polar bears shy of the IUCN’s more serious “endangered” category.

What needs to happen for polar bears to shift a category in the other direction, from “vulnerable” to the less-severe “near threatened”? Cator is clear on this point:

“The single most important factor to improve the long-term survival of polar bears is reducing greenhouse gas emissions and stabilising Arctic sea-ice.”

The IUCN assessment doesn’t look at the extinction risk for polar bears over a time-span of longer than about 35 years – or three generations of polar bears. But without action to tackle climate change, it is likely that many polar beat subpopulations will cross “tipping points” over the next century if sea-ice loss continues as forecasted, says Cator.

It’s worth noting that between 2011-2014, a scientific working group to the Canada-Greenland joint commission carried out a new comprehensive count of polar bear numbers in Baffin Bay and Kane Basin (pdf). The findings were published in July 2016, after the cut-off date for the last IUCN Red List assessment in August 2015.
Some claim the new study means scientists should revise the global population estimate upwards since polar bears are “clearly more abundant in Baffin Bay and Kane Basin than previously thought”. But the findings are far more nuanced than that, a scientist who was involved in the report tells Carbon Brief.

For Baffin Bay, the report explains how scientists are not able to draw a firm conclusion about whether or not polar bear numbers have changed, because of differences in how they are counted now compared to in the past.

In the Kane Basin, past and present numbers are more comparable. The most recent study found more bears than when they were last counted in the 1990s, leading the authors to conclude that the subpopulation is likely “stable or increasing”.

It’s worth noting, however, that the numbers are very small. Scientists spotted 357 bears in the recent study compared to 224 the last time round – a difference of 130. The scientists say the reason for the apparent rise could be less hunting, but they don’t rule out the effect of different sampling techniques.

Both the new Baffin Bay and Kane Basin counts represent the best estimates of the populations to date and will be valuable for future assessments, says Dr Eric Regehr, a polar bear expert at the University of Washington who helped prepare the new report. He tells Carbon Brief:

“In my opinion, this new information should contribute to estimates of the abundance of the global population, when such estimates are updated.”

But it would be premature to assume the findings are good news for the long-term future of the species as a whole, adds Regehr:

This is because declining sea ice means polar bears are losing vital habitat. In Baffin Bay, the report concludes that “it is reasonable to predict further changes in this subpopulation including, ultimately, declines in abundance”. Similarly, if sea ice loss continues in the Kane Basin, the study predicts that any recent growth in polar bear numbers will “diminish and be replaced by negative impacts”.

With the last IUCN Red List assessment only a year ago, the next one isn’t due for a few years. Whether or not it sees polar bears’ status altered will depend not only on the new Baffin Bay and Kane Basin counts, but also on the methods used to project future populations across all the regions in the Arctic, the timeframe considered, and what other new studies are completed by then, says Regehr.

A species in decline

In summary, there are polar bear populations about which scientists still know very little, and the total number of polar bears worldwide remains uncertain. But the trend in populations for which there is data point to a species in decline, compared to two or three decades ago. And with the impacts of warming on polar bear habitat and feeding well-understood, scientists are clear that polar bears face a profound threat to their survival in the coming decades.

In light of growing concern, the US, Canada, Norway, Greenland and Russia all signed a Circumpolar Action Plan (CAP) in September 2015, aimed at strengthening international cooperation around polar bear conservation. The next meeting is due to be held in 2017 in the United States.

Note: This article was updated on 22 Mar 2017 to include a discussion of recent polar bears counts in Baffin Bay and Kane Basin, published since the last International Union for the Conservation of Nature (IUCN) assessment.

Note: This article was updated on 23 Dec 2016 to include the latest IUCN Red List and extra comment from scientists. A paper detailing the conservation status of polar bears, the data from which underpinned the IUCN assessment, was published in Royal Society Biology Letters in December 2016.

Note: This article was updated on 4 March 2015 to include the most recent polar bear subpopulation map from the IUCD/PBSG and further explanation.