What would the world’s energy system need to look like in 2040 in order to limit climate change to two degrees? What would it take to get there?

One possible set of answers to those questions has been provided by the International Energy Agency, which published its latest World Energy Outlook (WEO) earlier this month.

The WEO is a set of projections looking at the future of the world’s energy system out to 2040. It explores three different ways today’s energy system might evolve, depending on the policy choices we make now.

It looks at a world where no new policies are enacted, leaving us on a path towards nearly six degrees of warming. It considers a world where we stick to climate pledges made by governments but not yet fulfilled. These would reduce warming below four degrees.

Finally it considers the policy and energy system changes that would be needed to limit climate change this century to two degrees of warming above pre-industrial levels.

We’ve used the WEO’s findings to produce a series of maps and charts illustrating the energy system we would need in 2040 to meet this goal. It’s going to take some big changes, but it boils down to five massively ambitious steps.

The WEO is expecting the world’s population to reach 9 billion in 2040, a 29 per cent increase on 2012 levels. Global wealth is expected to more than double over the same period, growing at 3.4 per cent per year.

Without new policies those changes would drive a 50 per cent increase in energy use, the WEO says. But in a two degrees world it sees the increase in energy demand being held to just 17 per cent, going from 13,361 million tonnes of oil equivalent in 2012 to 15,629 in 2040. 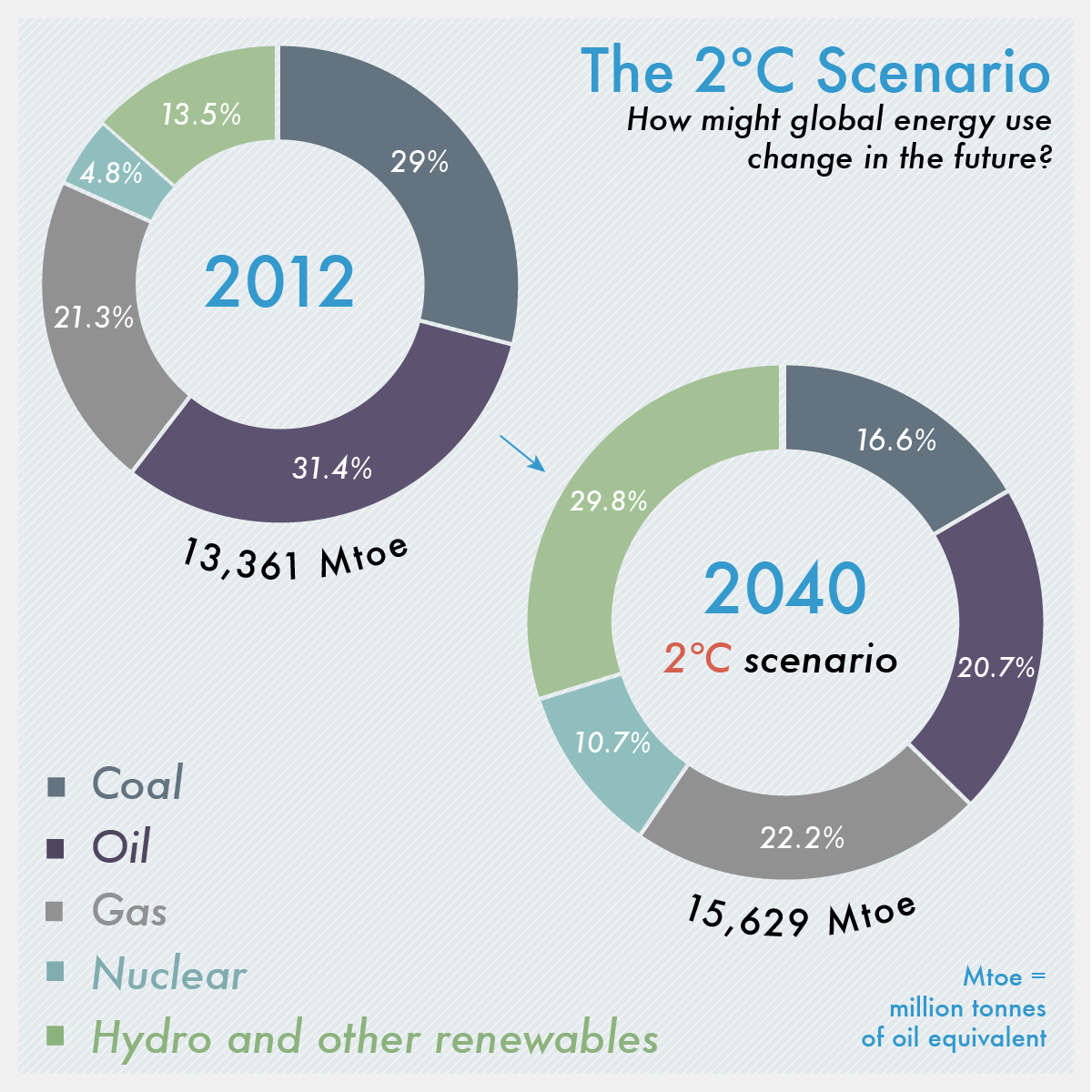 In order to limit energy use growth in this way, the world would have to become more than twice as productive with its energy. On average it took the equivalent of 184 tonnes of oil to generate a million dollars of wealth in 2012. This would need to fall to 85 tonnes, slightly better than the current energy productivity of the UK economy.

Even with a more energy-efficient economy it will be a challenge to meet energy demand, as we will see below. But if energy efficiency didn’t improve, it would be much more difficult. That’s why the IEA, UN Environment Program and others emphasise the importance of using energy more productively if we are to get on to a two degrees path.

The sorts of policies needed to drive energy efficiency include an end to fossil fuel consumption subsidies, worth $548 billion in 2012, and the implementation of mandatory building efficiency standards in most parts of the world.

Regulations requiring new buildings to produce as much energy as they consume would need to be rolled out from as early as next year in the EU and follow later in other regions. The whole world would need mandatory consumer product efficiency standards.

Global targets for energy efficiency in the steel and cement industries and vehicle efficiency standards that would cut fuel use in half between 2020 and 2040 would also be needed.

Stop burning so much coal and oil

The source of our energy in a two degrees world would also need to change. Fossil fuels’ share of global energy supplies would need to fall from 82 per cent in 2012 to 59 per cent in 2040.

In absolute terms the amount of energy we get from fossil fuels would also fall by 15 per cent, meaning a shift away from burning coal and oil, as the chart below shows. 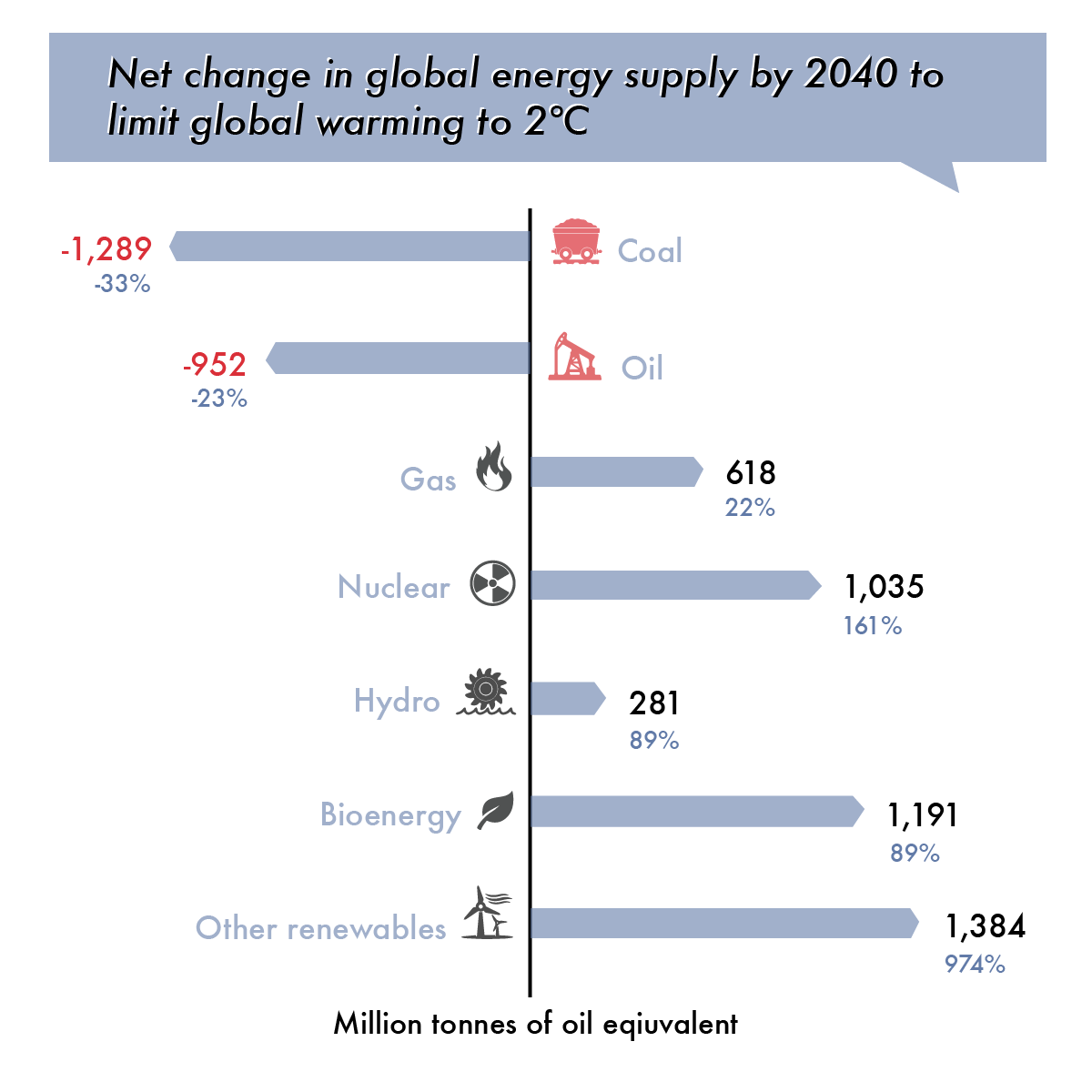 Falling coal and oil use would be partially balanced by growth in the use of cleaner-burning gas, which has carbon emissions that are roughly half those of coal per unit of energy supplied.

However, much more energy would come from low-carbon energy sources. Energy generated by nuclear would nearly triple. Output from hydropower and biomass would almost double. The largest increase in energy supplies would come from non-hydro renewables, which would increase ten-fold and on their own more than offset the fall in coal energy output.

These changes would have a big impact on carbon dioxide emissions from the energy sector, which have risen almost every year for decades. Emissions need to reach net zero by 2070 in order to limit dangerous climate change, according to a recent UNEP study.

Under its two degrees scenario the IEA expects us to be well on the way towards that goal by 2040, with energy-related emissions 39 per cent below 2012 levels. 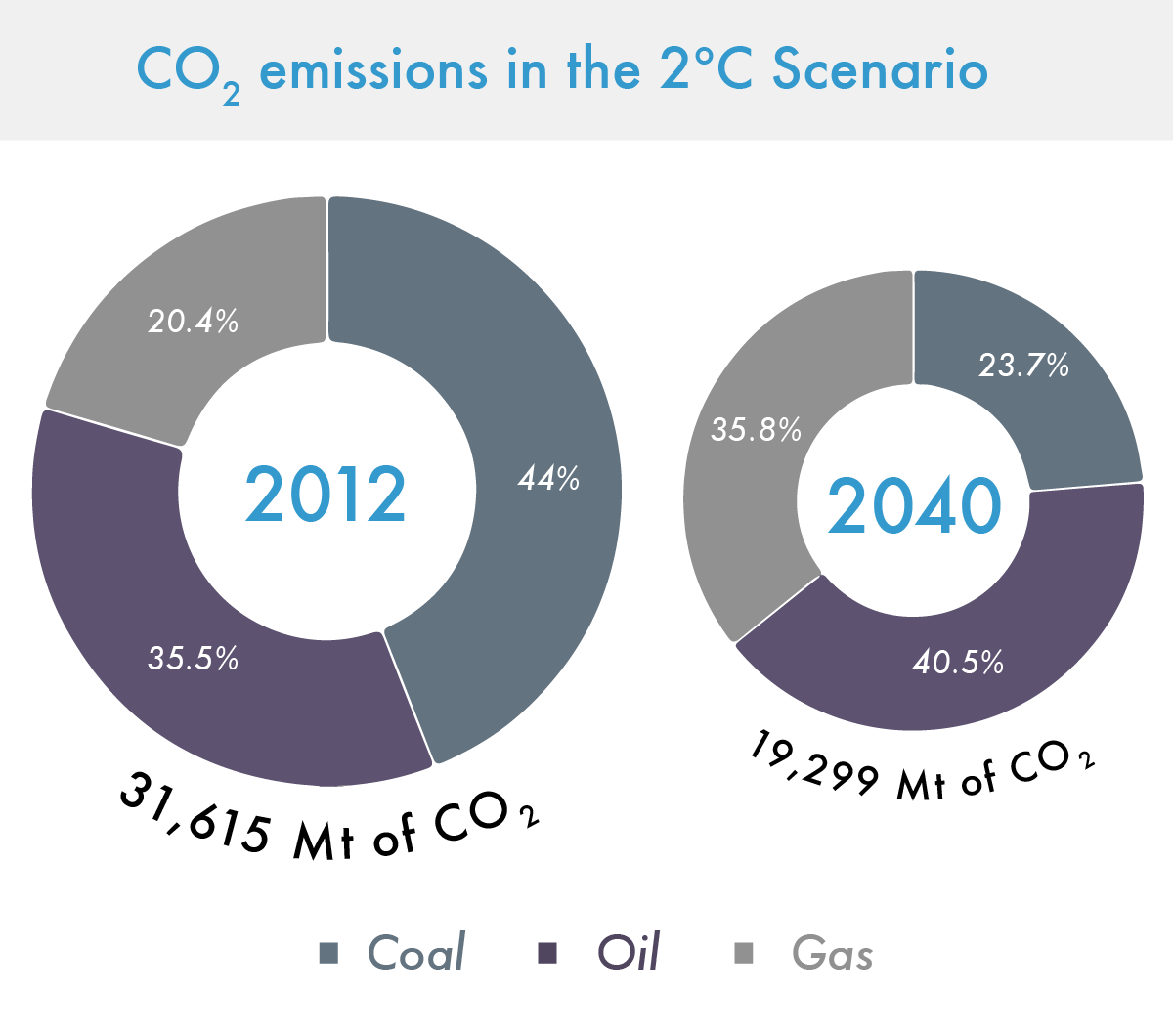 Gas emissions would increase slightly and claim a much larger share of total energy-related emissions. Most of the drop in emissions would come from using less coal, which would fall by two-thirds between 2012 and 2040 (left hand column, below). 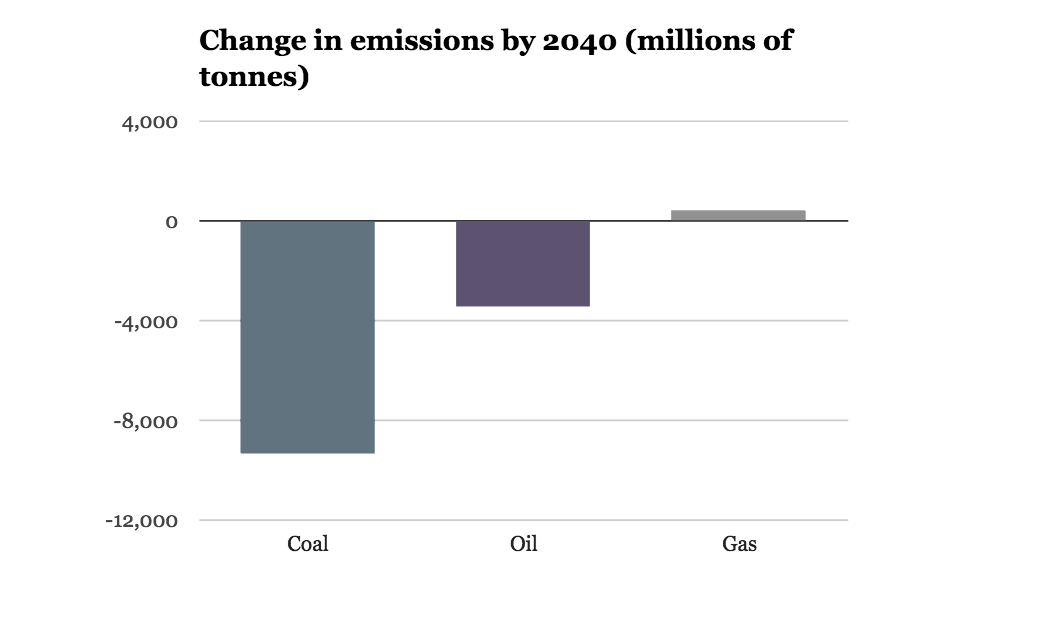 Coal emissions would fall a lot faster than coal use itself. That’s because the IEA’s two degrees scenario is heavily reliant on the widespread adoption of carbon capture and storage (CCS), allowing some coal use to continue with much reduced emissions.

The global CCS industry is in its early stages. Without CCS the world would either need to phase out coal more quickly or ramp up low-carbon energy sources even faster. To get an idea of what this means, with CCS in the mix wind power output would need to increase ten-fold to 2040 to help limit warming to two degrees. Without CCS wind would need to increase twenty-fold.

The remaining fall in emissions shown in the two charts above would come through burning less oil. Emissions from oil would need to fall by a third as part of climate efforts.

Achieving this reduction would not be a case of scrapping cars and grounding planes. Instead it would require a major shift towards more fuel-efficient vehicles, alongside a change in the types of fuel used.

For instance there would need to be a six-fold increase in the amount of transport energy supplied by biofuels, as the chart below shows. The use of “other” fuels (mainly natural gas) would also need to increase. Some vehicles already run on gas, usually called liquified petroleum gas (LPG). 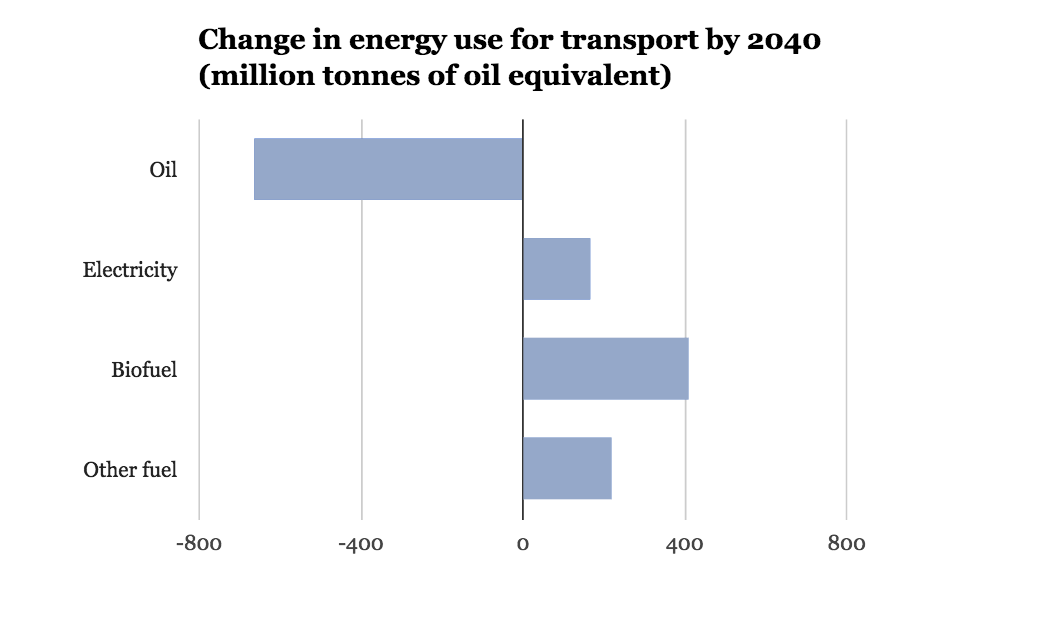 Finally there would need to be a six-fold increase in the use of electricity for transportation, meaning a massive roll-out of electric vehicles.

But electric cars only help reduce emissions if the electricity they run on is lower-carbon than today’s average. Power sector decarbonisation should be one of the top priorities in securing a two degrees world, the IEA says.

We’ve mapped changes to the electricity generating capacity of different parts of the world using data from the two degrees scenario. 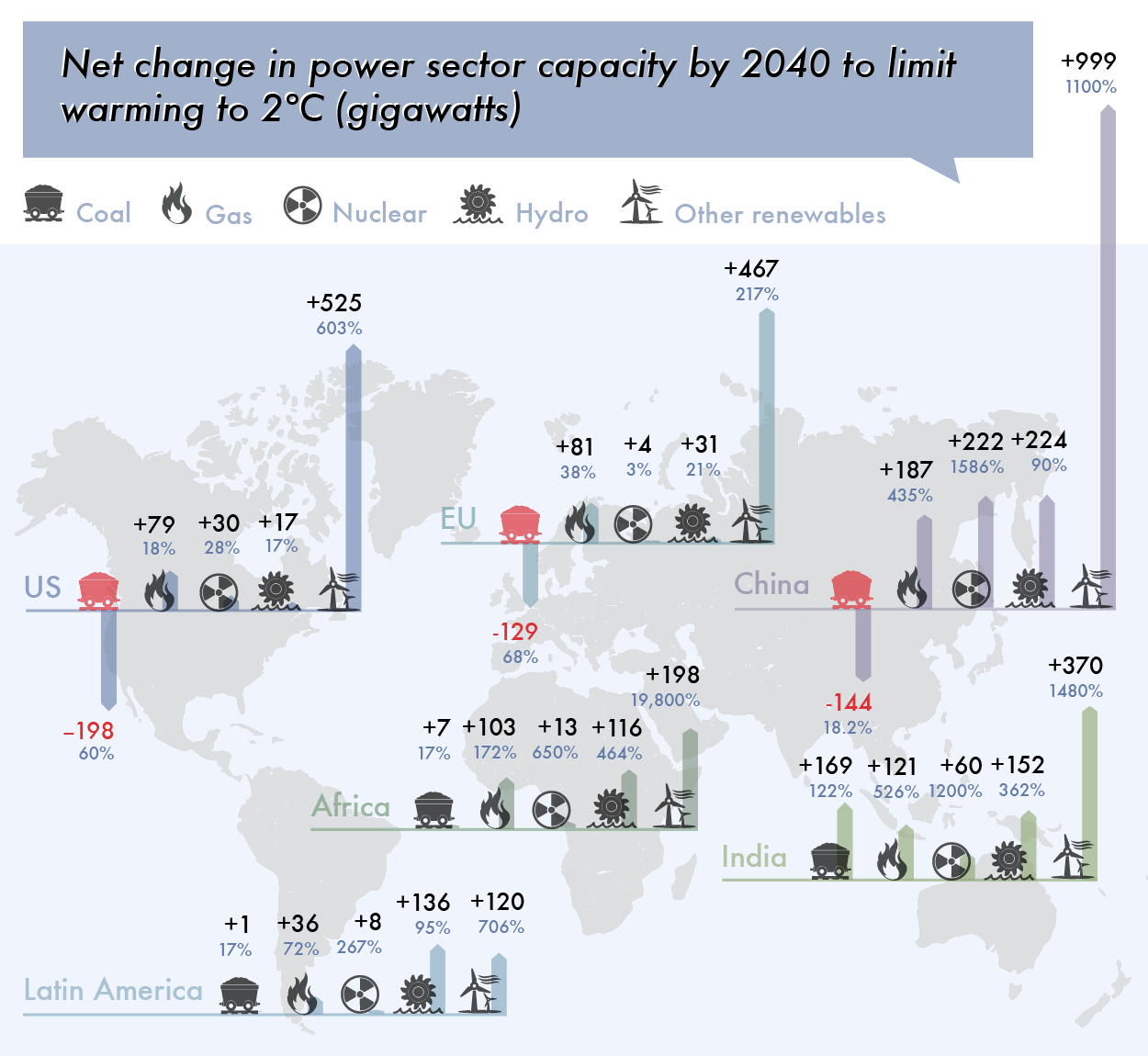 To reach that renewables target the US, EU and China would need to collectively add the equivalent of 381,000 onshore wind turbines at a rate of 14,000 each year until 2040. And they would need to put solar panels on the equivalent of 214 million roofs at a rate of eight million per year. For comparison the UK currently has around 6,000 wind turbines and 600,000 solar roofs in total.

The map also shows the need for greater capacity from other types of low-carbon generation, such as nuclear and hydroelectric plants. This is particularly true in rapidly growing developing economies in Africa, China and India. Chinese and Indian nuclear capacity would need to grow more than ten-fold, for instance.

The map also shows how India’s plans to expand coal-fired generation and give its poorest citizens access to electricity may be compatible with global action on climate – up to a point.

The two main messages remain clear, however. The US and EU would have to close two-thirds of their coal plants. Chinese coal capacity would have to shrink too. Many of the coal plants that remain would need CCS.

The WEO is just one set of scenarios showing how the world could change its energy use in order to limit climate change to just two degrees of warming. Other paths to that goal might be possible, using fewer nuclear plants, greater efforts on energy efficiency or a more rapid roll-out of electric vehicles for example.

But the scale of the challenge is so large that it’s hard to comprehend. Whichever path the world takes, that won’t change.