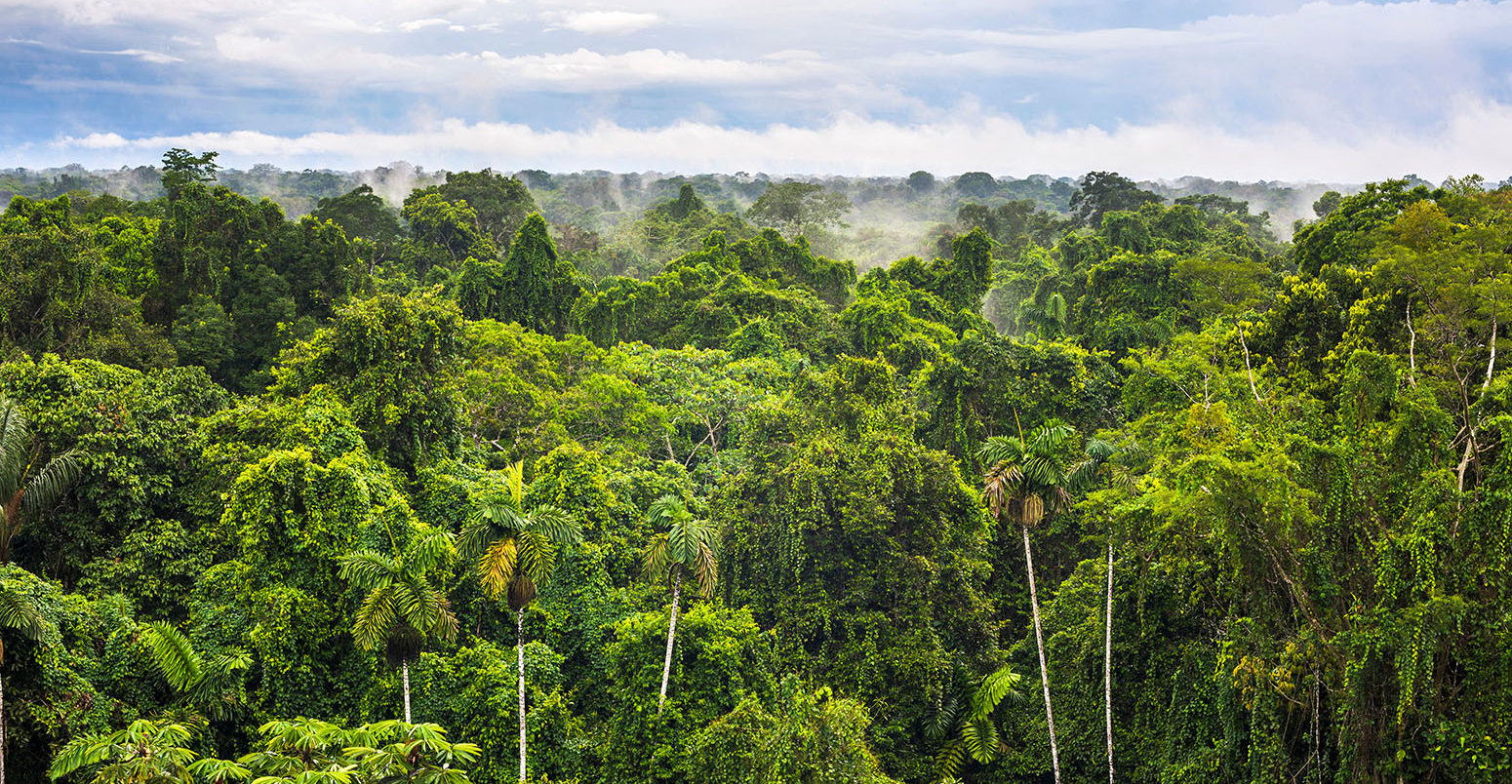 A lack of nutrients in Amazonian soil could restrict the forest’s ability to soak up emissions and lead to climate change progressing faster than expected, according to a new study.

As the world’s largest tropical rainforest, the Amazon is an important buffer against rising levels of CO2, much of which is absorbed by vegetation as it grows.

Existing climate models suggest trees will continue to remove rising volumes of human emissions from the atmosphere, making it easier to stay within the targets set by the Paris Agreement.

However, these models are generally based on relatively incomplete knowledge about the limits tropical soil nutrients are placing on rainforest growth. Specifically, insufficient phosphorus in the Amazon may hamper the region’s ability to continue removing CO2 from the atmosphere.

In a new paper, published in the journal Nature Geoscience, which aims for a more comprehensive picture of nutrients in the Amazon, an international team of scientists has simulated the impact of phosphorus on rainforest growth.

If supported by real-world experiments, their findings could have serious implications for efforts to meet global climate goals.

As it stands, the Amazon acts as a large carbon sink, absorbing a quarter of the carbon taken up by forests around the world every year.

In a process known as CO2 fertilisation, rising levels of the greenhouse gas promote vegetation growth by accelerating the rate of photosynthesis, which plants use to make food.

Extensive experiments conducted in the field have led scientists to predict that the Amazon, and other tropical forests like it, will continue in their role as carbon sinks for many years to come because of the CO2 fertilisation effect.

However, according to the scientists behind the new research there are reasons to doubt these conclusions. Firstly, most of the field work has been conducted in temperate regions, with very different ecosystems and much younger trees, as lead author Dr Katrin Fleischer from the Technical University of Munich, tells Carbon Brief:

“We know that CO2 fertilisation, high CO2, is just increasing productivity of plants, but everyone is now taking this assumption and what we know from the temperate zone to the tropics without really considering other constraining factors.”

Research has found that the presence of one nutrient in the soil – nitrogen – can influence the amount of CO2 that is absorbed. Nitrogen is essential for plant growth as it is a core building block in essential components including proteins and chlorophyl, the pigment responsible for photosynthesis.

If there is not enough nitrogen for plants to grow, they will remove less carbon from the atmosphere, even as CO2 concentrations rise.

As a result of this work, some global climate models, including some of those featuring in reports by the Intergovernmental Panel on Climate Change, take the impact of nitrogen into account.

But according to Fleischer, scientists have known for decades that in tropical forests, it is not nitrogen levels that tend to constrain plant growth, but phosphorus. In plants, phosphorus supports regular growth as well as vital functions including photosynthesis.

Along with other minerals such as magnesium and calcium, phosphorus enters the soil via the weathering of rocks, in processes that have not taken place in much of the Amazon for millions of years. By contrast, the glaciers that covered Europe 10,000 years ago led to new soil formation, meaning these nutrients are less of a limit on plant growth in the region.

Despite this knowledge, a lack of experimental data means modellers have tended to leave phosphorus and other nutrients out of their simulations. Fleischer says not considering this important factor will lead to overestimations of the Amazon’s ability to buffer against rising CO2:

“If this is true for all other tropical regions then climate change will probably go a lot faster than climate models are predicting at the moment.”

Determining the effect of phosphorus levels on CO2 fertilisation is one of the aims of a project currently underway in the Brazilian Amazon called AmazonFACE.

Like other “free-air CO2 enrichment” (FACE) projects, AmazonFACE involves experimentally increasing CO2 levels by 200 parts per million (ppm) and then measuring the impact this has on the plants growing within a section of mature Amazon rainforest.

Before the experiments are undertaken, Fleischer and her team created a series of models to simulate what might happen. The model ecosystem they created in their simulations represented the lower end of the phosphorus levels found in local soils, consistent with roughly a third of the rainforest area.

While boosting CO2 levels stimulated increased plant growth in every one of their 14 models, it was weakest in the six that took into account phosphorus as well as nitrogen.

Their models took into account both the direct restrictive effect of phosphorus deficiency on plant growth and also the way in which it constrains photosynthesis.

However, Fleischer explains that the range of different outcomes from their six models that incorporated phosphorus means it still remains to be seen how strong this effect is, and whether it is already playing out:

“Including phosphorus will definitely limit and bring down the CO2 fertilisation effect, but we don’t know by how much. It could bring it down to absolute zero or it could moderately bring it down and plants would still be able to find ways to use phosphorus more efficiently or acquire some phosphorus from the soil.”

However, given the age of many trees in the Amazon, she is concerned the region’s soil is already running low on phosphorus. “I personally think that after 30m years they [the trees] could have reached their capacity, but I can’t say for sure,” she says.

If this is the case, then the best models currently being used by scientists to ascertain the impact of future emissions may be missing a significant component.

According to Dr Thomas Pugh from the University of Birmingham, who was not involved in the research, this could have important implications for meeting climate targets:

“If the CO2 fertilisation effect is overestimated then the resulting reduction in the expected carbon sink will impact directly upon the carbon budget available to society. Simply [put], if nature will not take up as much carbon as we expected, then we have to emit less to stay within a 2C (or 1.5C) climate change target.”

It could also have repercussions for the forest itself. The Amazon is currently facing the twin threats of escalating deforestation and droughts, which are in turn being exacerbated by global warming.

Under the leadership of president Jair Bolsonaro, who has pledged to remove environmental protections and weaken indigenous peoples’ land rights, Brazil has seen a rapid acceleration in deforestation across the region.

The authors of the paper note that the limits placed on CO2 fertilisation by phosphorus may mean that the forest is less resilient than previously imagined.

As similar nutrient feedbacks are likely to be taking place in the tropical forests that cover much of Africa and Asia, Fleischer says it is likely that CO2 fertilisation elsewhere will also be hampered by lack of nutrients.

This is not the first time scientists have warned of tropical forests losing their resilience and ability to act as carbon sinks. One Nature paper from 2015 found the amount of carbon the Amazon was absorbing had fallen by a third over the previous decade, a trend scientists ascribed to increased tree mortality.

Pugh, whose own work explores the feedbacks between forests and climate, says the new paper is an “excellent example” of using models to reveal the best understanding of how ecosystems function.

However, like Fleischer, he emphasises the uncertainty that remains around the scale of impact from having low levels of phosphorus:

“What they also do very clearly is show the limits of our knowledge – that whilst the sink is smaller when the role of nutrients is considered, there is still a lot of uncertainty over its exact size.”

In the paper, the scientists tease out the various causes of uncertainties in their simulations, as well as the field measurements at the AmazonFACE experiment that could help narrow them down.

With plots set out in the rainforest and some initial measurements taken, Fleischer says progress with the project has been hampered by the Brazilian recession in 2015, which meant the funding that was initially pledged has been held up.

Having established critical knowledge gaps, the research team say their work presents a unique opportunity to determine whether the planet’s largest carbon sink will have the capacity to continue counteracting the planet’s rising CO2 levels in the future.