Briefing: The 15 options for net-zero emissions in the Paris climate text

Many of the world’s nations want this year’s Paris climate talks to aim for net-zero emissions, so that the world becomes climate neutral later this century.

Achieving near-zero emissions in the second half of this century is central to the Paris deal, UN climate chief Christiana Figueres said today at the close of UN climate talks in Geneva.

A long-term net-zero goal would provide a new focus for international action, which has so far aimed to limit warming to  no more than two degrees above pre-industrial temperatures. Emissions can be measured and controlled directly, whereas the  link between temperatures and dangerous warming is complex.

Yet the concept of a net-zero emissions goal is by no means a done deal. It has been expressed in many ways, including 15 different versions in the  latest draft of the Paris climate text, published late last night.

Carbon Brief explains what net-zero means, how it could work and what a target might look like.

In 1992, world leaders signed the United Nations Framework Convention on Climate Change at the Earth Summit in Rio de Janeiro. Its objective is to “prevent dangerous anthropogenic interference with the climate system”.

Scientists disagree about whether these temperature targets are a good way to measure dangerous warming or an appropriate way to organise climate efforts.

Carbon budgets have emerged as a way to translate temperature goals into more tangible targets for action. The budget is the total amount of carbon we can emit if we want to avoid a given level of warming above pre-industrial temperatures.

For instance, it will take just six years of current global emissions to exhaust a carbon budget that would give a good chance of keeping global warming below 1.5 degrees. The budget increases if we are willing to accept lower odds of staying within the limit, and increases again for higher levels of warming.

The picture gets slightly more complex if you consider greenhouse gases beyond carbon dioxide, such as methane or fluorinated hydrocarbons (HFCs). Still, it’s possible to calculate a greenhouse gas budget for 1.5 or two degrees.

If there is a finite carbon budget for a given level of warming, this raises the obvious question of what happens once the budget has been spent. That’s where net-zero emissions come in.

“There are multiple mitigation pathways that are likely to limit warming to below two degrees relative to preindustrial levels. These pathways would require substantial emissions reductions over the next few decades, and near zero emissionsof carbon dioxide and other long-lived greenhouse gasesby the end of the century.”

The IPCC says that to limit warming to two degrees, carbon dioxide emissions from the energy sector need to fall to zero by between 2040 and 2070, falling “below zero” thereafter.

Net zero means emissions can continue but must be balanced by negative emissions technologies. These range from tree-planting through to technological solutions that draw carbon from the air, or bioenergy with carbon capture and storage (BECCS).

The ability to balance emissions with uptake rather than halting them completely is important, because some emissions are hard to eliminate. Agriculture and aviation are common examples. Rice paddies and ruminant animals such as cows emit methane, while passenger aircraft cannot yet fly on electric power.

However, there are clear limits to negative emissions and many options, including BECCS, remain unproven.

There’s not quite enough information in the IPCC’s statements to work out when global greenhouse gas emissions would need to reach net zero. Several groups have put dates on net zero emissions, including the 2014 Emissions Gap Report from the UN Environment Programme (UNEP).

This week Climate Analytics, a research organisation led by several IPCC authors, published what is probably the most rigorous attempt to apply IPCC science to net-zero emissions. It offers different pathways to 1.5 or two degrees, depending on how quickly emissions are cut in the next five years and how certain we want to be that warming limits won’t be exceeded.

For instance, for a likely chance of limiting warming to two degrees this century, Climate Analytics says global greenhouse gas emissions in 2050 would need to be around half the 2010 level, falling to net zero between 2080 and 2100.

To ensure a more-likely-than-not chance that warming in 2100 will be below 1.5 degrees, Climate Analytics says net zero would need to be reached between 2060 and 2080. You can see these scenarios on the timeline below. Global greenhouse gas emissions need to fall rapidly between 2010 and 2050 in order to meet warming limits. Net zero emissions must be reached in the second half of this century. Source: Climate Analytics; timeline by Rosamund Pearce, Carbon Brief.

There is some scope for flexibility within these timelines. If emissions are cut aggressively before 2020, we can afford to reach net zero emissions slightly later. If we want to be more certain of avoiding warming, net zero must come sooner. Depending on the path taken, temperatures in 2100 might be falling, stabilising or slowly increasing.

Other groups have interpreted the IPCC’s statements around net zero emissions in slightly different ways.

The Climate Action Network of NGOs says that in order to limit warming to no more than 1.5 degrees, we need to “eliminate all fossil fuel use as soon as possible and no later than 2050”. This appears to exclude reaching carbon neutrality through negative emissions technologies.

The May 2014  Trillion Tonne Communique, signed by more than 150 businesses, backs a goal of net-zero emissions before the end of the century.

Net-zero in the UN climate deal

There’s also a wide range of net-zero targets in the current draft UN climate text, published late last night during talks in Geneva. This text will be discussed again by climate negotiators when they meet in Bonn in June, and is supposed to form the basis for a Paris climate agreement.

The current text is 84 pages long and has multiple options for each element of the final text, ranging from ambitious and specific through to modest and vague. Options are presented in square brackets, meaning the text has yet to be agreed by all 194 UNFCCC parties.

The text mentions net-zero, near zero, climate neutrality or full decarbonisation 15 times. Each is slightly different. Some include deadlines for reaching net zero, others do not. The most substantive proposals are presented in two sets of options, reproduced below.

The first set appears in a section on the overall objective of the draft agreement. It contains two options that aim for near-zero greenhouse gas emissions by 2100, but with different levels of emissions reductions by 2050. A weaker formulation talks of “substantially reducing” emissions by 2050 while the stronger Option (d) talks of negative emissions by 2080. 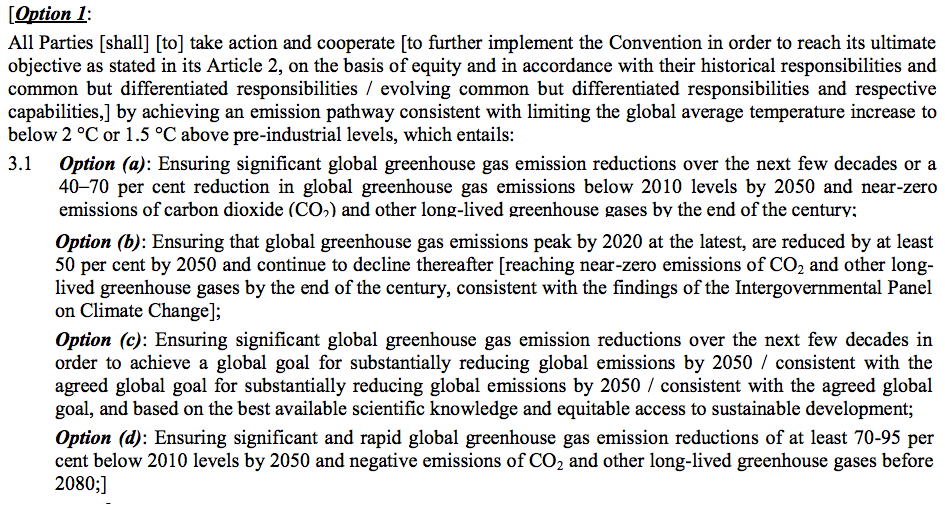 The second set of options is more varied and appears in a different part of the draft text, covering efforts to cut emissions. It includes a target of net zero emissions by 2050 that might apply only to developed countries. Other options target near- or net-zero emissions in 2100, or during the period 2060-2080. 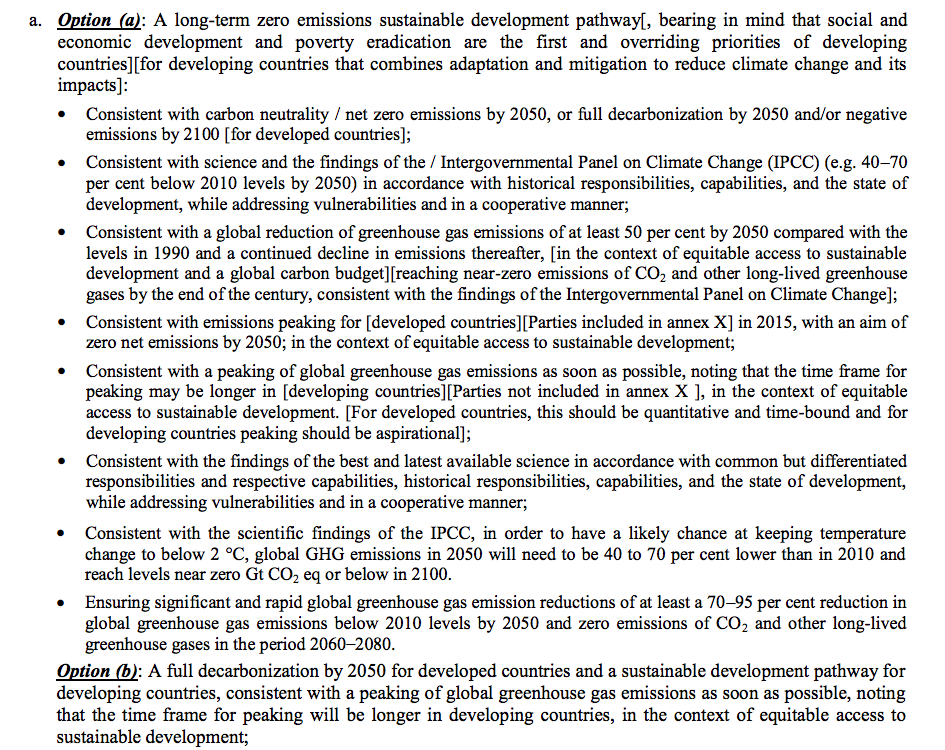 The way any targets would be divided up between countries features heavily in the text. This is likely to be a key sticking point for negotiators.

Who supports net zero in the Paris text

The reason for such a variety of options for net-zero is, in part, because some countries want to aim towards two degrees while others prefer 1.5 degrees. Not all countries support the inclusion of any long-term net-zero goal in the Paris text.

For instance, Saudi Arabia’s lead climate negotiator told the Financial Times it was unrealistic to target carbon neutrality by 2050, which would amount to a fossil fuel phase out.

The EU’s internal long-term climate goal is to cut emissions in 2050 by 80 to 95 per cent, compared to 1990 levels. It has expressed support for a target of net-zero global emissions by 2100, according to the Earth Negotiations Bulletin, but has yet to officially back the idea.

“There is a discussion in the UNFCCC context, of which the UK is supportive, of a global long term goal. We are exploring options on what the best formulation would be.”

Nearly 120 countries, including the EU, are supportive of a net-zero goal according to NGO Track Zero. Other supporters include the 44 members of the Alliance of Small Island States, who would like to see net zero emissions by 2050. The 48-member Least Developed Countries group backs net zero by 2060 to 2080. Track Zero has a full breakdown of net-zero supporters.

The world’s top three emitters – China, the US and India – are notably absent from this list. Together, these countries account for around two-fifths of global emissions.

The next step will be for negotiators to attempt to “streamline” the current 84-page text, including its 15 net-zero options, when they meet again in June. The 194 parties to the UNFCCC could amend, add to or completely discard the concept of net zero at this stage.

So while net zero could provide a much-needed clear and easy-to-measure framework for international climate action, it’s far too early to be sure it will be part of any Paris climate deal.

Update 17:00: We added a comment from the UK Department for Energy and Climate Change.