Briefing: What impact will cheap gas have on UK climate policy?

UK energy bills are starting to fall after a decade of rising prices. Energy firms have cut prices since the start of 2015 because of falling wholesale gas markets.

This directly benefits energy-bill payers and begins to ease the political pressure that has built up on energy bills over the past three years. But what does it mean for UK climate policy?

Carbon Brief takes you through the arguments around cheap gas, cold homes, energy bills and the green levies that pay for efficiency measures and support for low-carbon energy.

The end of rising prices?

Energy bills have risen steadily over the past decade. That’s  mainly the fault of the  rising price of gas. This sets electricity prices because gas-fired power stations are usually the marginal (most expensive) form of electricity generation.

The average direct debit customer in England and Wales paid £1,290 in 2014 for their gas and electricity combined, more than twice the amount a decade earlier. Prices rose by a third between 2010 and 2014 alone, as the chart below shows. 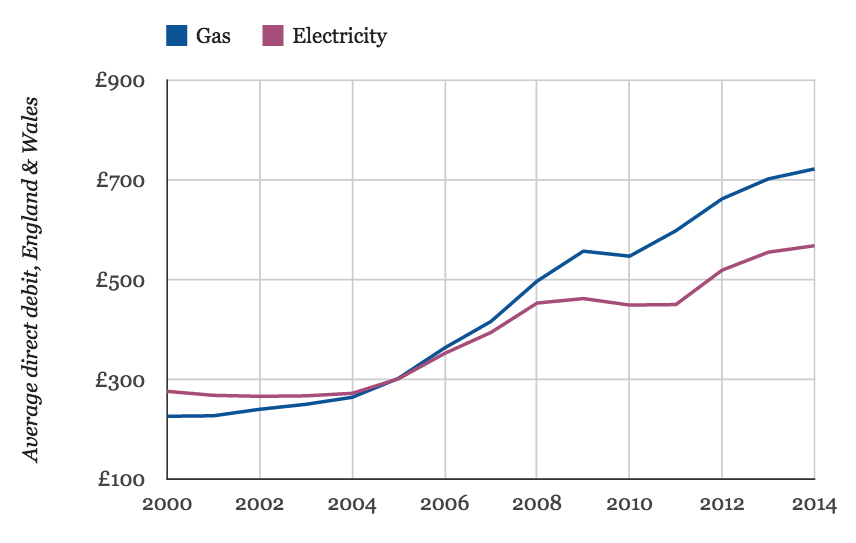 The cash price of the average energy bill has rocketed in the past decade. Source: Department for Energy and Climate Change domestic energy bills data.

It’s worth noting that one of the early attacks on “green taxes”, a 2011 Daily Mail front page, was published around the time energy bills had started increasing again, after a brief period of respite during 2008-2010. The Mail headline was corrected several times after Carbon Brief highlighted inaccuracies to the Press Complaints Commission.

Now, rising energy bills are going into reverse. Since the beginning of 2015, each of the Big Six energy firms has announced plans to cut standard gas tariffs by up to five per cent. EDF’s 1.3 per cent gas price cut comes into effect today, for instance.

The bill reductions come on the back of falling UK wholesale gas prices, down nearly a third in January 2015 compared to a year earlier, according to energy market information provider Platts.

The falling price of gas is partly linked to oil prices, with gas markets usually lagging behind by six-to-nine months. Oil prices have started to rebound, but gas is expected to remain at, or below, today’s relatively cheap levels for the rest of the year.

Research from Which? suggests suppliers are failing to share the benefits of cheaper gas with consumers. It says they should cut electricity bills by up to 10 per cent, again because of reductions in wholesale energy prices. Its analysis takes account of energy firms’ price-hedging strategies, which means they often buy energy months in advance.

It’s worth noting that rising prices are part of the reason UK homes have been using less energy over the past decade. Falling prices might slow, or even reverse that trend.

Falling energy commodity prices mean the pressure on energy bills is likely to continue to ease during 2015. Media and political attention has been turning towards energy firms’ profits and the draughtiness of Britain’s homes.

The falling gas price reinforces the need to emphasise energy efficiency, which the government can control, versus prices, which it cannot… Energy efficiency can help keep bills down in future, insuring against uncertain prices.

Spending on energy efficiency was the main casualty of the energy bills debate. Spending cuts have had a clear impact on the ground, with energy efficiency measures set to be installed in 170,000 homes this winter against 860,000 in winter 2011/12. That’s an 80 per cent reduction, says the Association for the Conservation of Energy, which compiled the numbers.

Falling bills might offer a political opportunity to support more energy efficiency spending in low-income homes, Watson suggests. The Labour Party has put energy at the heart of its election agenda, and its ambitious plans to boost energy efficiency through a “war on cold homes” are partly dependent on finding more money to support them.

The Committee on Climate Change says energy efficiency schemes are underfunded. It says consumers would save £95 off the average annual energy bill in 2020, if efficiency were properly supported. Moreover, the CCC says past energy efficiency policies shaved £165 off bills over the past decade.

This money-saving potential of green levies has tended to get rather less attention than the cost of supporting renewables. The falling price of gas will have an impact here, too.

Government reforms mean that, in the future, the renewables and nuclear industries will sign contracts for difference (CfDs) guaranteeing a fixed ‘strike price’ for the energy they produce. If wholesale electricity prices fall below the strike price then the difference will be made up in subsidies. The first auctions to secure £325 million worth of CfDs were held last week, with the results expected on 26 February.

The guaranteed strike price means the cost of meeting the EU renewable energy target for 2020 depends on future wholesale electricity prices. The working assumption had been that fossil-fuel prices would continue to increase, making renewables relatively cheaper.

Early last year, a group of MPs said there was a “risk of breaching the cap if the wholesale price falls”. Then energy analysts Aurora Energy Research and ratings agency Moody’s said the LCF cap would be breached because gas would be cheaper than the government expected.

Gas is now trading at around 45 pence per therm, the level predicted by Aurora. However, Mike Thompson, head of carbon budgets for the CCC, tells Carbon Brief there will be enough LCF money to meet the 2020 renewable target, even if low gas prices persist:

We think there’s roughly enough breathing space, even if gas prices remain in the 40 to 45 pence per therm range.

Carbon Brief found relatively broad agreement on this point, from the Department for Energy and Climate Change (DECC), through to trade body Renewable UK. Things could change after 2020, however.

For the 2020 target, a lot of renewable capacity is already baked in. Problems start post-2020 because the UK’s carbon budgets will get much more challenging. A key concern is how much renewables capacity can be procured in the auctions that started this week.

There is a fixed budget of £325 million for the first round of CfD auctions. In order to avoid overspend, the future costs of any contracts awarded through the auction will be estimated, according to projections of wholesale electricity prices.

DECC has revised its projections downwards, but some say the projections should be even lower because of the falling price of gas. Either way, with lower price projections, that £325 million will be assumed to pay for fewer windfarms.

Gordon Edge, director of policy for Renewable UK, tells Carbon Brief this budget squeeze could begin to put off investors, who see limited prospects to secure subsidies between now and 2020. The budget for the 2020s hasn’t been set yet either, so it’s hard to know if the UK will remain an attractive place to develop a wind industry for the longer term, Edge says.

Richard Howard, head of energy and environment for thinktank Policy Exchange, has two detailed blogs explaining why the details of the CfD auctions are contributing to uncertainty and decreasing value for money.

Beyond arguments over the government’s spending cap to 2020 and the details of how it runs its auctions, it is clear that persistent low gas prices would make renewables look relatively more expensive.

That won’t necessarily matter, argues Guy Newey, head of policy for energy firm Ovo Energy. People are more interested in whether bills have gone up or down than whether they are as cheap as they could possibly be, Newey says. So cheap gas is a good thing for consumers as it will drive down bills, even though the costs of supporting renewables would increase, DECC says.

The CCC echoes this. It says:

When gas prices are low, the cost of supporting low-carbon investments will be higher, but overall bills will be lower.

The CCC argues that renewables will reduce the volatility in energy bills, insuring against high future prices. Subsidy costs increase when gas is cheap, but decrease when it is expensive, smoothing out the peaks and troughs in global markets. Consumers and investors alike may view this smoothing effect in a positive light.

While the future price of gas remains highly uncertain, cheap gas today is already having an effect on the UK’s contribution to climate change. UK coal use in 2014 fell to historic lows last seen during the 1850s, as utilities turned from coal to gas last summer.

The chart below, from energy information provider EnAppSys, shows how this happened. Last summer, around half of the available coal capacity switched off (the difference between the red and grey areas, below left) with cheaper gas picking up most of the slack (below right).

UK carbon dioxide emissions in 2014 look to have fallen by 10 per cent year on year, in part due to that summer’s coal-to-gas switch. This shows the importance of the energy sector in driving total emissions. Coal generation during 2014 was 23 per cent below 2013 levels, EnAppSys says.

Gas prices spiked last autumn, but are now close to the levels seen last summer. That means a repeat of last summer’s coal-to-gas switching is increasingly likely, according to energy analysts quoted in an article for Bloomberg. The relative cost of coal- versus gas-fired power will increase by £4.50 per megawatt hour in April, when the UK’s carbon price floor doubles.

The coal-gas balance is complicated by falling coal prices, but, if other things are equal, cheap gas will reduce UK emissions from the electricity sector.

One final aspect to the cheap gas story is the potential impact on the nascent UK shale gas industry. Extracting gas only makes sense if firms can sell it at a profit. The point where market rates exceed extraction costs is known as the breakeven price.

Greenpeace Energy Desk found estimates of the cost of extracting shale gas in the UK ranged from 46 pence per therm up to more than 100 pence. So current price levels might make fracking in the UK unprofitable today.

It’s important to note, however, that firms would need to start shale gas exploration today in order to sell in the future. So it’s future prices, not today’s, that matter. Cheap oil and gas might make exploration cheaper, according to fracking firm Cuadrilla. The BBC has looked at these questions in more detail.

Cheap gas has a wide range of impacts on UK energy bills, from cutting energy bills and emissions to easing political pressure on green levies. A contribution to the fall in 2014 emissions is probably the most obvious and immediate outcome. But, in the longer term, the political impacts could be more significant.

Falling prices are an opportunity. It is right that consumers benefit directly, but I also think the government should consider how this provides a window of opportunity to strengthen climate policy where needed. That may mean thinking about what this means for future renewables spending, but, crucially, it also means investing in energy efficiency to lock in lower bills.