Politicians love to talk jobs when they make announcements. Creating jobs is much more exciting than signing bits of paper and it’s easier to grasp than the “net societal benefits” used by policy wonks to justify their plans.

So policy-creates-jobs is a well-worn trope on the political scene. Examples are easy to find, from Ed Davey opening a  “1,000 job” windfarm, to Ed Miliband promising to create a million green jobs or the Department for Energy and Climate Change (DECC) claiming its Green Deal home energy efficiency scheme will ” create green jobs” for a quarter of a million people.

Is there any evidence to back up these claims?

A new  report from the UK’s Energy Research Centre (UKERC) finds good evidence for short-term job creation as a result of low-carbon policies, but the longer term picture is much less clear. We’ve taken a look.

What are green jobs?

Let’s start by asking what a green job is. A solar panel installer obviously counts. But what about a delivery driver who delivers steel to a wind turbine plant on one day and a coal furnace forge another?

UKERC gets around the difficulty of defining green jobs by looking at the job impacts of renewable energy or energy efficiency policies. It counts any changes in employment that resulted from these policies, whether they are obviously ‘green’ or not.

Construction workers employed to build a new windfarm are ‘direct’ jobs, shown in dark green on the left in the chart below. Production line operatives at a factory supplying parts to a wind turbine manufacturer have ‘indirect’ jobs (light green, left column). The extra money these workers have to spend as a result of being employed can create ‘induced’ jobs (aquamarine).

If you add up all of these you get the gross number of green jobs created by a policy (the central green column above).

But policies can have unintended side-effects and displace jobs in other sectors (red, yellow and orange chunks above). Increases in renewable electricity generation, for instance, could reduce demand from coal-fired power stations, causing job-losses at the power firm or at coal mines. Energy policy changes might also increase electricity prices, pushing up costs for steelmakers and other energy-intensive power users.

These displaced jobs might match or even exceed the gross green jobs created, so it’s important to try to consider the overall net job impact of low-carbon policies.

Most studies looking at green jobs ignore this part of the calculation, UKERC found, so they probably over-estimate the beneficial employment effects.

How can we measure green jobs?

Even measuring the gross job creation effects of a policy is hard, however. The most common approach uses what’s called an input-output model. These use look-up tables representing the flows of money and resources in an economy and are relatively quick to run.

A major downside to these models is they assume new demand for employees or financial capital is always met without any impact on other sectors. So green jobs can be created without taking employees away from other parts of the economy, by definition.

These models also tend to ignore price effects such as changes in electricity prices, which might affect job prospects at firms that use a lot of power.

More complex economic models are available but because of their complexity they are less often used have been used less often to examine green job creation. UKERC found only three that specifically looked at the job impacts of renewable energy or energy efficiency policies.

These more complex models aren’t perfect either. While not the same as those in input-output models they still make assumptions that are questionable in different ways.

For instance some types of model assume that the economy is always in equilibrium. This means there is only a ‘natural rate’ of unemployment due to people being in between jobs or choosing not to work at the wages the market offers. In this mathematical world, involuntary unemployment doesn’t exist.

During a recession when unemployment increases, this obviously isn’t true. But in the long run most economists think economies really do approach this perfect equilibrium, at least in theory.

Fast-acting policies might be able to create jobs in a recession. If the economy tends to reach the perfect full employment equilibrium, however, then the idea of long-term job creation becomes meaningless. Job creation through low-carbon policy or any other kind of policy would then be impossible.

So can green jobs be created or not?

The UKERC report explains all of these shortcomings of economic modelling with admirable candour and in much more detail. But what those media-hungry politicians really want to know is if green jobs can be created or not.

In the short term there is a “reasonable degree of evidence” that investing in renewable energy or energy efficiency creates more jobs than getting an equivalent amount of power from new fossil-fired stations, UKERC says. The timescale is important because of the assumptions about economic equilibrium and unemployment we saw above.

UKERC found each extra gigawatt hour of electricity generated from renewables or saved through efficiency, creates one additional green job compared to the fossil fueled alternative.

You can see this broken down for different energy sources in the chart below, which compiles the results of a bunch of different studies. Some of these looked only at direct job impacts and are marked “D”. Others included indirect jobs (DI) and induced jobs (DII) as well. The numbers underneath each energy source in brackets show the number of studies involved. 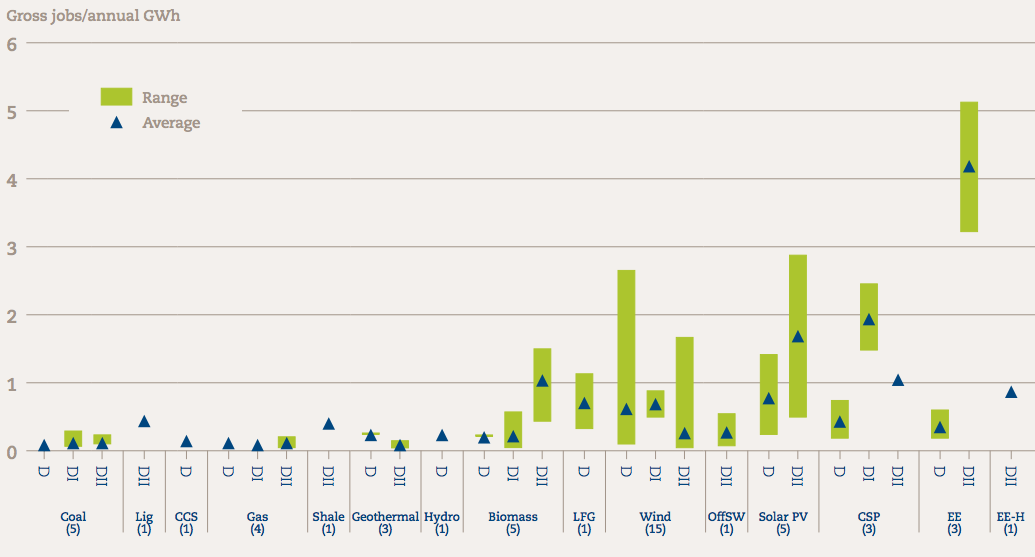 The figures are for gross jobs, so they don’t include any displaced jobs in other sectors. Once you try to include displaced jobs the picture becomes less clear cut, but UKERC’s best estimate is that the net impact remains at around one green job per gigawatt hour of low carbon energy.

These net jobs figures still mostly come from input-output (IO) models, however. So they don’t consider the impact of changes in electricity prices even though this is one of the major concerns for opponents of low-carbon energy policies, who say expensive green energy will drive manufacturing jobs overseas.

The few modelling studies UKERC found to include price effects gave mixed results on green jobs. The outcome often depended on the source of spending for low-carbon energy, whether funded through taxes or through levies on energy bills.

Another reason jobs numbers vary a lot is the choice of counterfactual. This is what would have happened if ministers spent money on something else instead of renewables and energy efficiency.

UKERC notes that quite a few green job studies totally ignore the counterfactual and so exaggerate the positive employment effects.

On the other hand, UKERC says some studies play down the benefits of green jobs by using things like house building as the counterfactual instead of fossil-fired electricity production. A given amount spent on construction will create more jobs than renewables because it is very labour-intensive, for instance. Taken to the extreme, this line of thinking is clearly flawed. It would imply the best way to create jobs would be digging holes and filling them up again.

All of these caveats to the green job creation evidence almost add up to an absurdity. The study lead author Will Blyth says:

“On one level we would have liked the report to say don’t ever let ministers make those statements [about green job creation] because it’s sort of meaningless.”

Many of the same caveats apply to other job creation arguments too, such as the ones around the potential benefits of shale gas exploitation.

But UKERC policy director Jim Watson tells Carbon Brief that ministers can continue referring to jobs in their announcements despite the evidence on long-term net job creation being weak, as long as their emphasis shifts.

This is already somewhat in evidence where ministers refer to projects ” supporting green jobs” rather than creating them, with “supporting” being code for an acceptance that the jobs may come at the expense of other sectors.

There are other even more productive ways to talk about green jobs, Watson suggests. This could involve efforts to create jobs for deprived areas of the country, or to create well-paid, highly skilled jobs in place of lower skilled employment.

More broadly, the UK’s transition towards a lower-carbon economy is bound to change the shape of the employment market and green jobs studies can help us understand and respond to that. The economic transition will produce both winners and losers in terms of both jobs and business models.

Disagreements over the potential to create green jobs often boil down to differences of opinion about the need for that low-carbon transition, UKERC’s report says, along with questions about when the transition should happen and what role renewables should play.

Ultimately though, the UK is attempting to decarbonise because of the risks of unmanaged climate change – not because of green job creation. The UKERC report reveals the limitations of jobs creation studies, but doesn’t change that ultimate rationale for low-carbon policy.