Climate science never stops developing. Over the course of the year we’ve covered a myriad of scientific studies, some of which have made the news, and others which have been more quietly received. Here’s our pick of the papers that have shaped scientific discussion about climate change in 2014.

In February, a paper by Matthew England and colleagues helped shed light on why surface temperatures have risen more slowly over the last 15 years or so than in previous decades, even though we’re emitting greenhouse gases faster than ever before. A few pieces of research last year pointed towards the tropical Pacific as holding the key. The England paper added a layer of detail by describing the process that could be at play.

Trade winds have been particularly strong since about 2000, which is driving heat deeper into the oceans and bringing cooler water up. This has made earth’s average surface temperature 0.1 to 0.2 degrees cooler than it would otherwise be, the scientists estimate.

While scientists suggest there could be an additional role for the Atlantic in driving the hiatus, evidence for the Pacific Ocean mechanism seems to be winning out at the moment.

For more on how the ocean deeps influence what we feel up here on earth’s surface, here’s our top to bottom look at the oceans and climate change.

A paper by Ian Joughin and colleagues in May suggested the chain of events leading to collapse may already be underway. It won’t be quick – probably taking several centuries. But beyond a certain point, the process is likely to be unstoppable, the scientists warned.

A separate paper by Eric Rignot described extensive satellite, air and ground surveys, which found not only are West Antarctic glaciers shrinking but there are no landscape features – like ridges, or other obstacles – stopping the ice from melting away completely.

So are the glaciers retreating or collapsing entirely? And do scientists think the collapse of the WAIS glaciers is “unstoppable”? We’ve answered some questions the research raised, here.

This year, the amount of ice surrounding Antarctica reached a record high of 22.11 million square kilometres. Antarctic sea ice extent has grown at a rate of about 1.5 per cent per decade since 1979, according to satellite data. 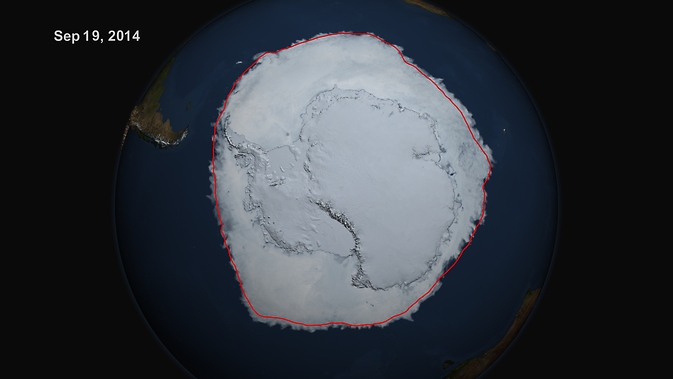 Scientists know the Greenland and Antarctic ice sheets are losing ice, and that Arctic sea ice loss is accelerating. But pinning down why the opposite is happening in Antarctica is proving more difficult.

Scientists say changes in local wind patterns and ocean circulation are the most likely candidates, delivering cold water to the surface which then freezes.

But a paper back in July by Ian Eisenmann and colleagues suggested there may be another explanation – a change in the way measurements are made, rather than in the sea ice itself.

In 2007, NASA updated its main sea ice dataset. Eisenmann found this had the effect of pushing sea ice values down a bit before 1991 and up a bit afterwards, which makes the growth in sea ice appear quite a lot bigger than before.

The authors say they can’t be sure yet if the old dataset is wrong, or the newer one, so it may well not be that significant. But if it’s the latter, that raises the possibility that Antarctic sea ice growth has been overestimated. You can read more about what other scientists had to say about the new paper, here.

4. The link between Arctic sea-ice loss and extreme winters got a bit stronger. Maybe

Temperatures in the Arctic are increasing almost twice as fast as the global average – a phenomenon known as Arctic Amplification.

A paper published in October by Masato Mori and colleagues was the latest in a series linking rapidly increasing temperatures in the Arctic to very cold winters in the northern hemisphere.

Jennifer Francis and Steve Vavrus first put forward the hypothesis that Arctic Amplification could affect northern hemisphere weather by influencing the jet stream – a band of fast-flowing air high up in the atmosphere.

While Francis told us she thinks the recent paper means the mechanism is a “done deal”, not everyone is as convinced. It’s a very new area of research and there is relatively little data to work with, as Arctic amplification only emerged as a strong signal in the mid-1990s.

The long-term picture suggests these cold winters might only be a temporary feature before further warming takes hold, Mori and colleagues suggest.

Climate change is raising the odds of summer heatwaves in Europe by a factor of 10, according to research from the Met Office. Over the past 10 to 15 years, the likelihood of a ‘very hot’ summer has risen – from once every 50 years to once every five years.

The summer of 2003 was the hottest ever recorded for central and western Europe, with average temperatures in many countries as much as five degrees higher than usual.

To see how climate change is affecting the likelihood of heatwaves and other extreme events, researchers carry out single-event attribution studies. The first of these studies back in 2004 found the 2003 heatwave was made more than twice as likely because of climate change.

The new paper finds the rising impact of humans on the climate means the risk of ‘extremely hot’ summers is now ten times greater than when the 2003 European heatwave struck.

As the frequency of heatwaves increases, so do risks to human health. Building resilience to high temperatures is critical for limiting deaths during extended hot weather, the authors warn.