Oil firm BP says the world is still failing to do enough to tackle climate change, despite major policy announcements over the past year from the US, EU and China.

The latest annual  Energy Outlook shows how BP sees the world changing in terms of economic growth, energy use and emissions. While BP expects countries to meet current climate pledges, it does not think they will be enough to avoid dangerous climate change.

Carbon Brief takes a look at how the media reported the Energy Outlook and how BP’s vision differs from a climate-friendly future.

Rising energy use and emissions

The BP outlook predicts energy demand will grow by 37 per cent between 2013 and 2035, reports  the Guardian. This is “at odds with the fight against climate change”, the paper says.

A more climate-friendly future is set out in the International Energy Agency (IEA) two degrees scenario. This shows how  energy efficiency must play a large part in limiting emissions.

Global energy demand increases by just 14 per cent between 2012 and 2035 in the IEA two degrees scenario, slower than over the past two decades (blue line, below). In contrast, BP expects the recent rapid growth in energy demand to continue (green line). 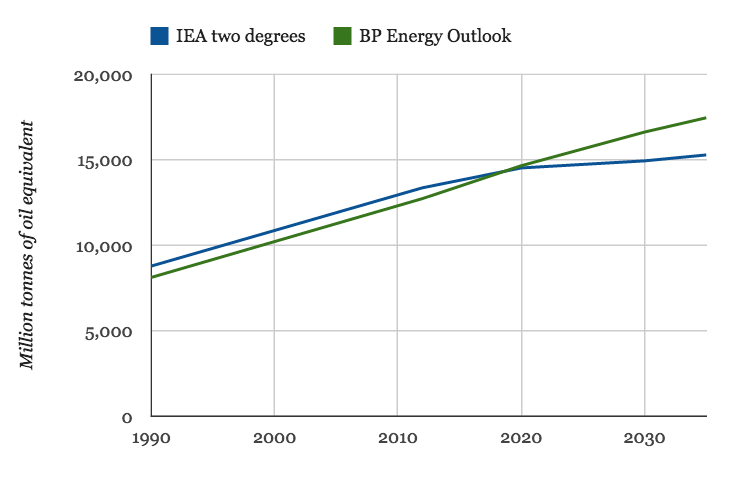 BP’s outlook expects two thirds of the increase in energy demand to be met by fossil fuels, reports  RTCC. Gas would overtake coal as the number one energy source, reports  City AM.

The  Financial Times reports BP saying that oil producers’ cartel Opec will make a comeback while the  Times and  Independent focus on low expectations for the UK shale gas industry.

Business as usual for energy?

In general, BP expects the global energy mix to remain relatively unchanged between now and 2035. It is more bullish on oil demand than the IEA, for instance. It thinks fossil fuels will continue to supply more than 80 per cent of the world’s needs in 2035 (grey area, below left).

Fossil fuels’ share of world energy supplies would be falling rapidly by 2035 in the IEA’s two degrees scenario. By then, low-carbon sources including nuclear and renewables would account for a third of the energy mix (green area, below right).

Low-carbon share of the global energy mix under two different scenarios. Note that BP excludes traditional forms of bioenergy such as collected wood and dung from its figures, whereas the IEA does not. Source: BP Energy Outlook 2035 and IEA World Energy Outlook 2014. Charts by Carbon Brief.

BP also expects barely any shift in the transport energy mix, with oil remaining overwhelmingly dominant. Oil, gas and other fossil fuels will still supply 95 per cent of transport energy in 2035, BP suggests (grey and blue areas, below left).

In contrast the IEA’s two degrees scenario sees electric vehicles and biofuels supplying a rapidly expanding share of transport energy needs by 2035, growing from five to 25 per cent of total needs between 2020 and 2035 (green and pink areas, below right).

The difference between BP’s Energy Outlook and a climate-friendly future also shows up in expectations for the electricity mix, where BP expects fossil fuels to continue to supply well over half of supplies in 2035 (grey area, below left).

In contrast, the IEA’s two degrees scenario has  low-carbon electricity sources such as nuclear, renewables and bioenergy accounting for over half of electricity supplies as early as 2030 (green area, below right).

Oil Change International says BP has consistently underestimated the rate of growth in clean energy technologies, particularly renewables and electric vehicles. If this is true, and the BP outlook is too pessimistic, then clean tech could help close the gap to a climate-friendly future.

For instance, BP expects the world’s coal use to increase by 22 per cent by 2035, whereas it would need to fall by 29 per cent in a two degrees world (red versus blue bars, below). 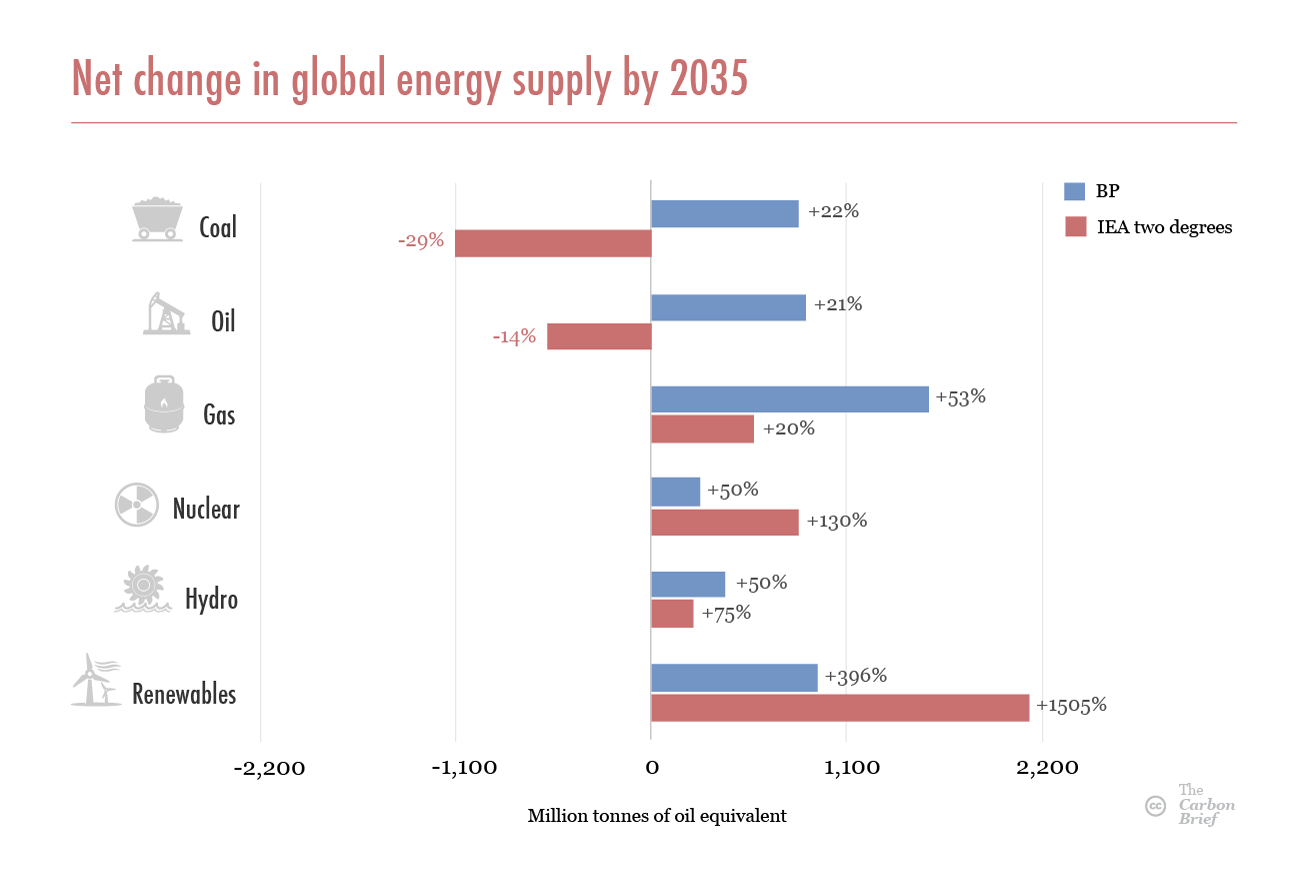 A two degrees path to 2035 would also include more efficient energy use, less coal and oil, limited increases in gas and significantly more nuclear and renewables. Carbon Brief has a detailed look at the massive changes to how we use energy such a pathway would require.

BP’s Energy Outlook sees carbon emissions growing by 25 per cent between 2013 and 2035, with annual growth of one per cent. This is sufficient to “blow” the carbon budget consistent with limiting warming to two degrees above pre-industrial temperatures, says RTCC, while the Telegraph says even BP recognises this would be unsustainable.

That’s despite some major new climate policy announcements from the US, China and EU over that period. While BP has amended its outlook to reflect new climate policy, it appears to think the global energy impacts will be minimal.

For instance, projections for north American coal use in 2035 are 37 per cent lower than expected by BP’s 2014 outlook, reflecting president Obama’s June 2014 Clean Power Plan. Yet global coal projections have only been revised down by four per cent.

BP’s projections for Chinese and EU energy demand have barely changed, despite China’s historic new climate pledge and the EU’s new 2030 climate targets, both announced in 2014. Meanwhile, the company expects the world to consume more oil, presumably in response to lower prices. This offsets some of the benefits of new climate policy.

The 2015 BP Energy Outlook remains a long way off a climate-friendly vision of the future, despite the new policies announced since last year. BP says these policies remain inconsistent with the two degrees world politicians say they want.

Its outlook is more pessimistic than others about how quickly low-carbon energy will grow and the potential for energy efficiency. Meanwhile a global climate deal this year would probably reduce demand for the fossil fuels BP produces. Will BP be persuaded a climate-friendly future is possible? We’ll have to wait for next year’s Energy Outlook to find out.