Newspapers are this morning  saying the UK is at increased risk of blackouts. The headlines are covering an annual report from the National Grid, which insists the lights will not be going out. Energy market regulator  Ofgem and the  government are also lining up behind the grid to reassure the public that the lights will stay on.

So what is the document that National Grid has published today? And does it tell us what state the UK energy system is in? We take a look at five things we learned from the  National Grid Winter Outlook.

The UK’s electricity system is in a state of flux. It’s changing as power stations  close down as a result of old age and  more stringent pollution rules. At the same time we are  building lots of renewables, mainly windfarms.

During this shift in the supply base, the buffer between peak demand for power and the maximum that can be generated (the capacity margin) is expected to shrink for a few years.

This shouldn’t be a surprise. We saw very similar newspaper headlines warning of ‘blackouts’ in both 2012 and  2013.

National Grid has been busy planning for the change in our energy system for a while. What has been a surprise this year is the number of unexpected events, including several power station fires. These have reduced generating capacity and raised the volume of worried headlines.

The chart below shows how the expected margin for this winter (grey bar) has been reduced by fires at Ironbridge and Ferrybridge coal-fired power stations, the closure of Barking power station and unplanned reductions in capacity at Hartlepool and Heysham nuclear power stations (red chunks). It also shows the positive impact of the coal plant at Eggborough re-thinking its plan to partially close down (green chunk). 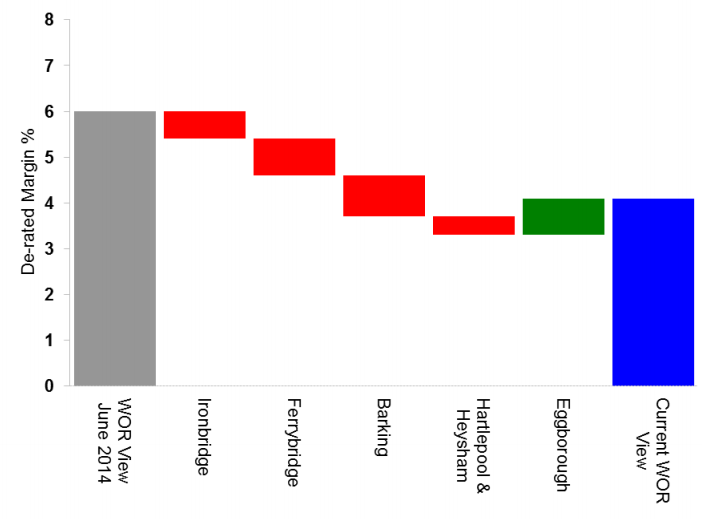 The chart doesn’t include the effect of a recent fire at Didcot B gas-fired power station. The plant had been running at half capacity of 700 megawatts but will be back up to 1,050 megawatts from tomorrow – three quarters of its usual output. National Grid tell Carbon Brief this is all reflected in its winter outlook.

Including all of these recent changes in plant availability, the Winter Outlook says there is a 4.1 per cent margin between available capacity and peak demand (the blue bar on the chart above). That’s lower than last year, when the margin was 5 per cent. But it’s quite similar to 2005-6 when the margin was also around 4 per cent, and lights stayed on.

Security of supply measures are changing

The grid expects peak demand to be 53.6 gigawatts if we get an average winter. It thinks there is a 50 per cent chance it will be colder and demand higher, at 55 gigawatts. If winter is exceptionally cold – colder than 19 out of 20 recent winters – then demand will be higher still, at more than 56 gigawatts.

The UK grid has a total generating capacity of more than 71 gigawatts, well above even the highest demand figures. That could only be generated if all power stations were running full tilt, however. The amount of capacity expected to be available during periods of peak demand is a lower 58.2 gigawatts.

This “de-rated capacity” takes into account planned plant closures, as well as statistical expectations of unexpected shutdowns and variations in windfarm output, so it includes an assessment of the variability of renewables like wind power.

So the 4.1 per cent margin is the buffer of 2.3 gigawatts above cold winter demand of 55 gigawatts. That margin would be roughly halved if this winter is a particularly cold one and we get a 1-in-20 year cold snap.

Along with the governments of France, Ireland and the Netherlands it has introduced a new reliability standard called “ loss of load expectation” (LOLE). This is the number of hours each year during which the grid would have to take action to ensure supplies continue.

The government says LOLE should be below three and National Grid expects this winter to stay well within that standard, at 1.6 hours.

Why the change? It’s to do with the treatment of variable power sources like renewables. Windfarms rarely put out their average de-rated capacity. The variation between a windy day and a calm one is huge and LOLE is better able to make use of that information.

LOLE isn’t a very intuitive measure however, which is why newspapers prefer the de-rated margin. But the sea change going on in the UK electricity market means we’ll probably be hearing more about LOLE and less about capacity margins in future.

For now though, we’re sticking with the focus on capacity margins. Maybe you think margins look pretty grim, particularly if we get that really cold winter. Maybe you don’t believe that the grid will be able to keep things under control.

The Winter Outlook makes a bunch of pretty conservative assumptions, however, that mean things probably aren’t as bad as they look.

One way it is conservative is that it assumes electricity demand will remain at current levels. In reality, UK demand has been falling pretty consistently since around 2005 as shown in the chart below.

You can see how demand goes up in winter and down in summer (red line). The winter peak is down about ten per cent from around 59 gigawatts in winter 2005-6 to around 53 gigawatts last winter. This reduction in demand is also visible once seasonal variations are smoothed out (blue line).

So while National Grid’s margin figures expect peak demand to stay the same, the graph above shows it has been falling. We took at look at why earlier this year. More importantly the Department for Energy and Climate Change (DECC) expects demand will continue to fall, suggesting demand this winter and for the next few years is likely to be below last year’s level.

The grid also makes pretty conservative assumptions about how much electricity we will be able to import from continental Europe.

There are two major undersea cables linking the south coast with France and the Netherlands. Their total capacity is 3,000 megawatts, equivalent to a very large power station. National Grid assumes that the UK can only rely on these cables for imports of 750 megawatts.

It then assumes that this entire import will be offset by exports to Ireland along another two cables with a total capacity of 750 megawatts. So the contribution to UK capacity from electricity interconnector cables is assumed to be a net zero megawatts.

The data from the last two winters shows this to be a conservative assumption. The UK was importing at maximum capacity from France (blue bars, labelled IFA below) and the Netherlands (yellow bars, labelled BritNed) during most of last winter, for instance.

That’s because wholesale electricity prices tend to be significantly higher in the UK than in France or the Netherlands. This attracts imports of electricity to the UK.

The exception was a period of a couple of weeks in December 2013, when France was experiencing unusually high prices that saw the UK export power to the continent. The UK almost always exports to Ireland at maximum capacity (red and green bars below). This is also driven by a price difference. 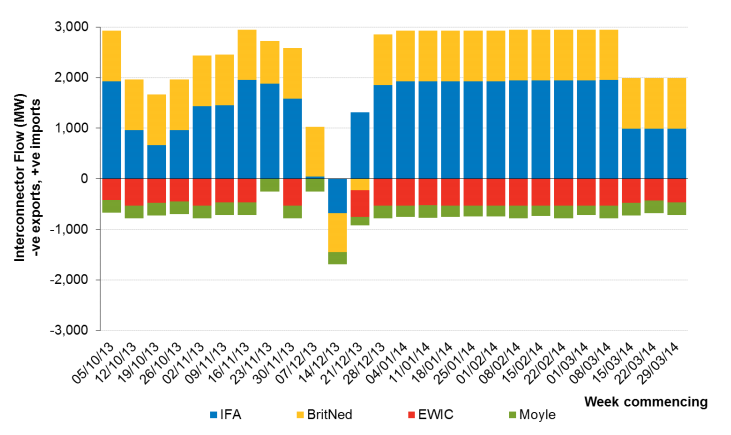 The grid acknowledges that the reality, shown in the graph above, may be rosier than its assumption for interconnectors. Full import from the continent and full export to Ireland was the general pattern over the past two winters, it says. This means the net interconnector capacity is more like 2,000 megawatts rather than 750 megawatts.

National Grid has almost certainly planned for the worst

In case you haven’t got the message already, National Grid planners are a pretty conservative bunch. They already had several options to draw on when capacity margins are squeezed, and now they’ve set up two more.

National Grid can ask some power stations to briefly turn the dial up to 11, for instance, to provide a 740 megawatt buffer called ‘Maxgen’. It also has a scheme called the Short Term Operating Reserve (STOR) worth another 3.5 gigawatts.

Under STOR, firms are contracted to turn down demand when the grid requests it in return for a cheaper electricity tariff. That could mean turning down large industrial-size fridges or switching to backup generators, for example. The grid also has the option to turn down the voltage of electricity supplies a tiny bit, as this reduces demand.

After the fires and other unexpected outages the grid decided it wasn’t satisfied with these options alone, so it came up with two new schemes to help out if things get really tight.

One is called Demand Side Balancing Reserve (DBSR). We took a look in more detail earlier this year but this is basically an extension to STOR where businesses are paid in return for curbing peak demand.

The second scheme, called Supplementary Balancing Reserve (SBR) will contract three power stations from 1 November to act as standby capacity. They will only be fired up if demand gets close to maximum available supply. The SBR contracts are with gas plants at Peterhead and Rye House plus an oil-fired plant at Littlebrook, with a combined capacity of 2,745 megawatts.

The winter outlook says the addition of SBR and DBSR increases capacity margins from 4.1 per cent up to 6.1 per cent and improves the LOLE reliability standard from 1.6 hours to 0.6 hours. These schemes will run for the next few years until the government’s capacity market kicks in. This is designed specifically to ensure security of supplies.

The range of options at its disposal is why National Grid is so confidently asserting that the lights will stay on this year, next year and for the foreseeable future. National Grid director of market operation Cordi O’Hara writes in a foreword to the winter outlook:

“This report is not a prediction of what could or will happen, but a factual analysis of how the  energy sector looks based on the information we currently have. Of course, we don’t have a crystal ball and can never second guess what could happen.

“What we do know is that we have taken steps to make sure we are ready and have the tools we may need. Based on the work we’ve done, it’s clear the country has the ability to meet its energy needs in a cold winter.”

Energy regulator Ofgem is confident too, saying the risk of blackouts this winter is no higher than in recent years. The energy eggheads could be wrong, but we wouldn’t bet on it.