28.01.2015 | 7:20am
PeopleGlobal Calculator shows how the world can ‘prosper’ while tackling climate change

The world’s population could live a prosperous, European-style lifestyle by 2050 at the same time as avoiding dangerous climate change, according to a new Global Calculator developed by the UK’s Department for Energy and Climate Change (DECC).

The online tool shows how global prosperity can increase, even as emissions fall by 60 per cent from current levels in line with climate targets. This feat, according to the calculator, would require a series of  massive changes to how we use energy, such as a shift from fossil fuels towards nuclear and renewables, and much wider use of electric heat and transport.

DECC’s tool shows this transition might be slightly more, or slightly less expensive than the cost of doing nothing to tackle emissions. Either way, the difference in costs would be minimal, relative to expected growth in global wealth.

The new global tool has already been used by organisations, including DECC, Shell, the International Energy Agency and Friends of the Earth, to imagine the world in 2050. However, not all of these future scenarios are compatible with a safe climate.

Carbon Brief takes you through the nuts and bolts of the tool, DECC’s version of a prosperous two-degrees world and how the calculator can be used to compare competing visions of the future within a common frame of reference.

How the tool works

Anyone can use the web-based Global Calculator tool to model the world in 2050, by making a series of choices about lifestyle (such as diet and appliance use), transport, buildings, industry, land use and energy. The tool then shows whether these choices are consistent with meeting the internationally agreed target to  limit warming to two degrees above pre-industrial temperatures. 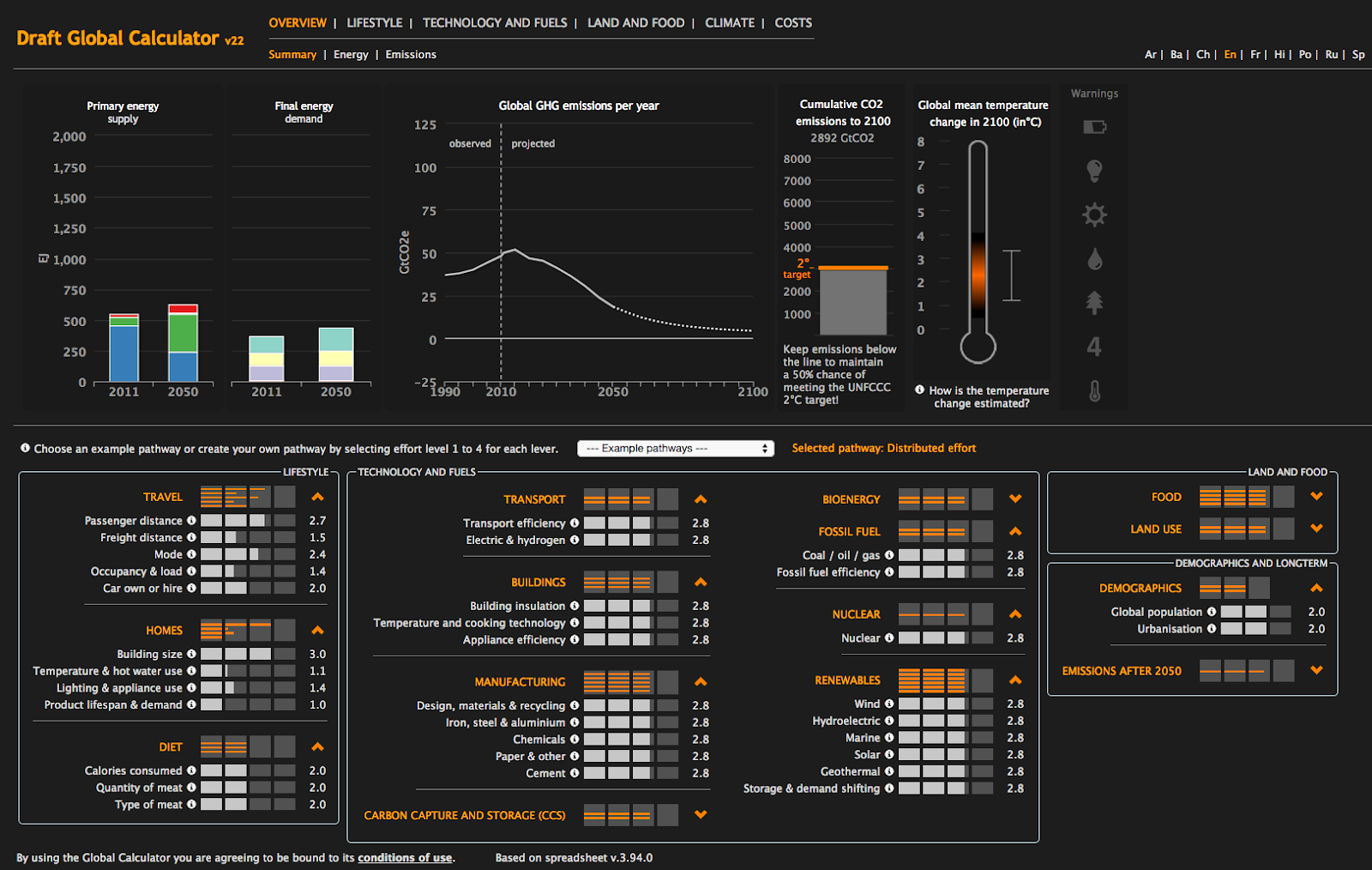 The tool offers users 44 ‘levers’ with which they can make choices about the future, which you can see in the image above. Each lever runs on a scale from one, representing minimal climate ambition, to four, representing “extraordinarily ambitious and extreme effort”. Only a minority of experts believe level four is achievable.

For example, on nuclear energy these levels would translate to zero gigawatts installed globally in 2050 at level one, up to a maximum of 1,870 gigawatts at level four. The range covered by each lever is based on views gathered at six expert workshops held around the world last year, and a public consultation.

The calculator team has published a more detailed description of the tool’s methodology and there’s also a video explaining how to use it and a detailed how-to webpage.

DECC’s How-To video for the Global Calculator, from YouTube

The idea behind the calculator is to explore the climate impact of plausible choices about how the world develops. It’s a global model so it doesn’t tell us anything about climate equity or the distribution of mitigation efforts, wealth or improved lifestyles.

The tool estimates how much it would cost to implement user choices about the future. These estimates are very uncertain, however, and come with a long list of health warnings for those eager to over-interpret their significance.

The tool does not take into account either the costs or benefits of a warming climate, or the co-benefits of mitigation action, such as improved air quality. The impacts of warming on crop yields are not automatically assumed, for instance, though they can be modelled by the user.

Technology cost estimates are largely based on historic prices for the US and no account is taken of the economies of scale from wide deployment of particular technologies. Price effects and supply and demand interactions are all ignored.

The calculator is based on an open-access Excel spreadsheet developed in collaboration with hundreds of international experts and jointly funded by EU research initiative Climate-KIC . The global model is a follow-up to DECC’s UK-only 2050 calculator, which has been adapted for countries including China , India and Japan .

Projections suggest the global economy would triple in size and energy demand increase by 70 per cent by 2050, if the world continues on its current path. Living standards would improve, with increasing access to electricity, larger and better heated or cooled homes.

Global emissions would grow from today’s 50 gigatonnes of carbon dioxide equivalent to around 84 gigatonnes and, by 2100, the planet would warm by around four degrees. It need not be like this, however. DECC has used its calculator to show that business-as-usual increases in living standards can be achieved at the same time as successfully tackling climate change.

It has developed four scenarios where prosperity indicators track business as usual, but where warming is limited to no more than two degrees.

“For the first time this Global Calculator shows that everyone in the world can prosper while limiting global temperature rises to two degrees, preventing the most serious impacts of climate change.”

The DECC scenarios vary, for example, in terms of how much effort is made by consumers and how much on reducing emissions from land use. Yet some common themes emerge, suggesting certain actions will be essential if dangerous warming is to be avoided.

Each of DECC’s two degrees futures involves cutting fossil fuels’ share of the global energy mix from around 80 per cent today to 40 per cent in 2050, with a massively increased role for nuclear, renewables and carbon capture and storage (CCS). This shift would mean around 45 per cent of oil, 50 per cent of gas and 80 per cent of coal reserves are unburnable.

The scenarios also all involve cutting per capita energy demand by around 10 to 15 per cent by 2050, through measures such as more efficient cars and better insulated homes. In other words, energy efficiency is a crucial part of the solution to climate change.

Finally, DECC’s prosperous two degrees futures all see crop yields grow by 40 to 60 per cent due to advances is agriculture, so that a growing population can be fed using less land so that forest areas can be protected and expanded. This increase in yields would be below historic rates of improvement, but above the UN’s projected yield increase to 2050.

The DECC scenarios range from three per cent of global GDP more expensive to two per cent cheaper than average annual energy system costs under business as usual. For comparison, the Intergovernmental Panel on Climate Change says tackling climate change would cost an annual average of 0.06 per cent of global consumption.

Other visions of the future

It’s worth emphasising that DECC’s scenarios confirm the world could prosper while tackling climate change, but the conclusion is not a new one. Where the calculator comes into its own is as a way to make rival visions of the future comparable.

Hundreds of scenarios showing how the world can, or cannot tackle climate change have been developed over the years by governments, scientists, civil society groups and businesses. The problem is that these have been based on different methodologies with varying assumptions.

The DECC calculator allows these different views to be properly set side by side for the first time. For now, there are scenarios from around ten organisations. DECC is looking to expand this. So how do these organisations’ scenarios differ from DECC’s? To get an idea, Carbon Brief takes you through offerings from green group Friends of the Earth (FoE) and oil major Shell.

Shell’s ‘Oceans’ scenario considers a future of rapid economic growth driving increasing energy demand. The first thing you will notice is that it breaches the two degrees climate target, with cumulative emissions by 2100 of 3,500 tonnes of carbon dioxide equivalent. That’s well above the 3,000 tonnes level needed for a 50 per cent chance of staying below two degrees. 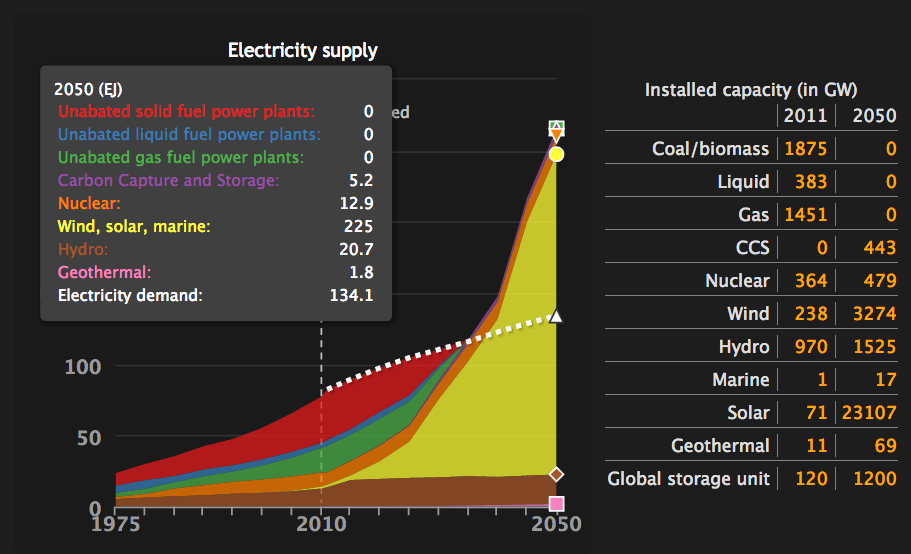 Electricity supplies in the Shell Oceans scenario. Solar makes up the lions’ share of the large yellow wedge, creating a decarbonised electricity supply by 2050. Credit: globalcalculator.org

All that solar, coupled with small amounts of CCS and a modest increase in nuclear capacity means that Shell’s scenario has zero-carbon electricity supplies in 2050. Yet it still breaches the two degrees goal. Going all out for solar and decarbonising electricity is ambitious, but it has a narrow focus.

The FoE scenario goes the other way in terms of climate ambition, giving a 50 per cent chance of staying within a much more ambitious 1.5 degrees target. It reaches net-zero global emissions by 2050 through massive emissions cuts coupled with large-scale reforestation, which absorbs carbon from the atmosphere.

Reforestation in the FoE 2050 scenario, shown by the expanding dark green wedge. Land is released for reforestation by reducing use of land for crops to feed livestock (dark red). Credit: globalcalculator.org

It’s worth noting that FoE achieves its ambitious climate goals despite sticking with its traditional opposition to nuclear power, closing off one option for reducing emissions.

In order to meet its targets without nuclear, FoE has to ramp up the ambition in many other areas. It turns 12 out of the 44 levers up to four, the exceptional level of ambition that not all experts believe to be achievable.

Like Shell, FoE sees the world shifting to near-100 per cent renewable electricity by 2050. But rather than focussing on solar, it uses a portfolio of renewables complemented by large amounts of storage to balance intermittency. It uses no nuclear and only a very small amount CCS.

The two begin to diverge on population. FoE sees global population growing to 8.3 billion by 2050 against central estimates of around 10 billion. FoE’s choice is at the low end of UN projections, which range from 8.3 up to 10.9 billion people in 2050. This implies global fertility tending towards rates in developed nations, where increasing wealth has been accompanied by falling birth rates.

One surprising result is that FoE’s scenario is actually a fair bit cheaper than doing nothing on climate. It’s also cheaper than any of DECC’s two degrees scenarios and Shell’s Oceans. That’s because of the huge increases in energy and material efficiency it assumes across buildings, transport and industry: the cheapest form of energy is that which you do not use.

For instance, it assumes that by 2050 electricity use per person falls by more than 60 per cent, where DECC and Shell see increases. FoE sees zero-carbon cars claiming a 55 per cent market share, home insulation performance increases by 75 per cent and the annual weight of industrial outputs falls by a third as products become more lightweight and longer lasting.

The DECC Global Calculator shows there are common threads in any successful effort to tackle climate change. These are primarily energy efficiency, a largely decarbonised electricity sector, a shift away from fossil fuels and substantial growth in crop yields.

DECC’s scenarios show these changes can be made at the same time as improving peoples’ lives and without significantly changing costs.

The real value of the calculator, however, lies in its open and accessible framework. This means organisations with widely differing views can compare their futures using the same sets of underlying assumptions. Whether you agree with DECC, Shell, Friends of the Earth, or none of the above, the calculator makes their futures directly comparable.

That means you can get a good idea of why their futures differ and what their choices might mean for the climate. Think you can do a better job? Why not have a go yourself at globalcalculator.org.