Hydrogen is expected to become one of the building blocks for reaching global climate goals, yet current production is almost exclusively from high-carbon sources.

In a recent study, we looked at how quickly the world would need to scale “green” hydrogen – made by splitting water with low-carbon electricity – in order to help limit warming to 1.5C. (For more on the different ways of making hydrogen, see Carbon Brief’s in-depth Q&A.) The capacity of electrolysers needs to grow 6,000-fold by 2050 in a 1.5C pathway, from today’s levels of 600 megawatts (MW).

Our findings suggest that, even if electrolyser capacity grows as quickly as wind and solar power, it is still likely to fall short of this trajectory. It would supply less than 1% of final energy until 2030 in the EU and 2035 globally – well below the requirements in 1.5C scenarios.

Emergency-like growth rates, similar to those achieved by the US for military equipment in the second world war, would enable green hydrogen to meet ambitious targets for its expansion.

Yet this pace of adoption would entail demanding and rapid policy interventions. Accelerated deployment of alternatives to hydrogen, such as electric cars, electric trucks and heat pumps, offers a hedge against the risk that hydrogen deployment fails to meet such lofty expectations.

The current capacity of hydrogen electrolysers stood at around 600MW globally in 2021. In the IEA’s 1.5C-compatible Net-Zero emissions by 2050 scenario (NZE), this capacity reaches 3,670 gigawatts (GW) by 2050 – a staggering 6,000-fold increase. This enormous scale-up challenge dwarfs even the simultaneously required 10-fold increase in renewable energy capacity.

Nevertheless, it may be possible to achieve an ambitious path for electrolyser deployment. The capacity of announced projects is showing exponential growth in the EU and globally. If all of these projects are built, the global total will reach 300GW by 2030, of which half is in the EU.

The chart below shows the amount of electrolyser capacity being planned, by year of proposed deployment in the EU (left panels) and globally (right panels). Planned capacity is broken down by country or region (top panels) and by project status (bottom panels).

Current electrolysis capacity is comparable to solar photovoltaics (PV) capacity in 2000. Global PV capacity then reached 300GW in 2017. What took 17 years for solar might only take half as long for green hydrogen, if all project announcements materialise.

However, firm electrolyser investment commitments are trailing behind. More than 80% of the capacity announced to come online in 2024 is not yet backed by a final investment decision.

It is, therefore, very uncertain how many announced projects will be realised and whether electrolysis capacity can expand fast enough to meet mid- to long-term hydrogen demand.

The EU illustrates the short-term challenges of scaling-up green hydrogen. In response to the global energy crisis, the EU has stepped up its efforts to accelerate the energy transition.

The recent REPowerEU package sets a target of producing 10m tonnes (Mt) of green hydrogen by 2030, as well as importing another 10Mt. Producing each 10Mt of hydrogen would require around 100 gigawatts (GW) of electrolyser capacity. Can this level be achieved?

The pipeline of announced projects is shown again in the figure below, broken down by country (left) and by status (centre). Most of these projects have had a feasibility study carried out or are planning to do so (light blue bars) but have not yet progressed beyond this stage.

If 30% of these “feasibility study” projects are built by 2024, as planned, then installed capacity would still need to double every year after to reach the 2030 target (below right).

Growth rates of 100% – needed to double capacity each year – are unprecedented for energy technologies and well above those historically observed for solar and wind.

In our Nature Energy article, we extend this idea and again ask: “What if electrolysis grows as fast as wind and solar have?”

Methodologically, we broaden the outlook until 2050 and account for uncertainties in key parameters using a probabilistic approach. We simulate thousands of possible expansion pathways and aggregate them to what we call the “green hydrogen feasibility space”.

This is illustrated in the figure below for the EU (left panels) and globally (right). Electrolyser capacity targets are shown with open circles, including requirements to be consistent with the IEA’s NZE by 2050 and, thus, limiting warming to 1.5C (dashed line). The upper panels show the period to 2050 and lower panels zoom in to 2030.

Example simulated pathways for installed capacity are shown by the grey lines, with the probability of achieving these outcomes shown in shades of red. The central pathway from our simulations is shown by the dark red line. 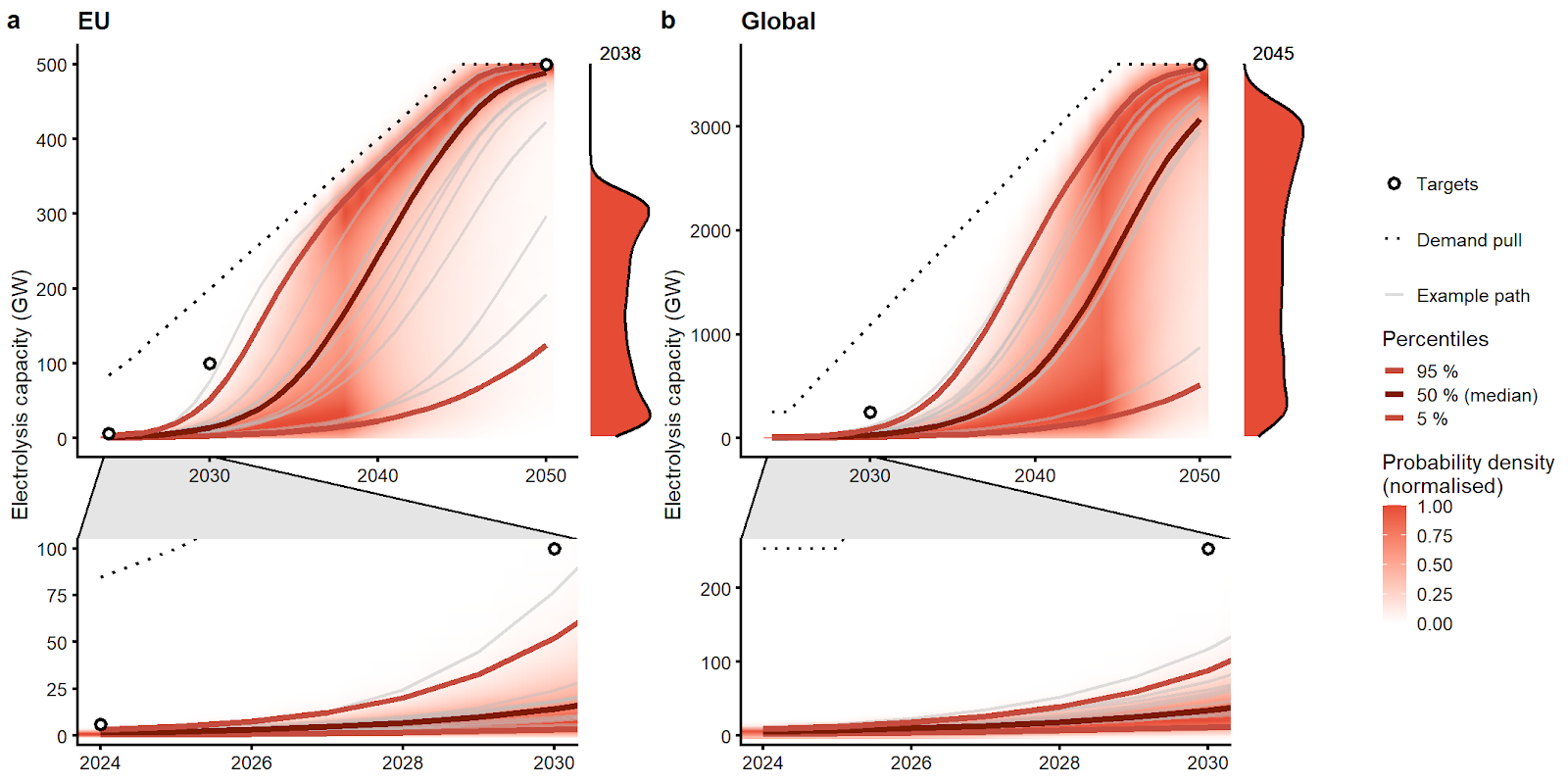 Our findings suggest that green hydrogen is likely to be scarce in the short term, assuming it grows as fast as wind and solar have done in the past. Hydrogen has the potential to become more abundant in the longer term, but our results show this is uncertain.

Short-term scarcity means that – again under growth rates seen for wind and solar – electrolysis capacity will likely remain small in comparison to government targets over the next couple of decades. This is despite initial exponential growth in our simulations.

In this case, green hydrogen would likely supply less than 1% of final energy until 2030 in the EU and 2035 globally, well below the requirements in 1.5C scenarios.

Our simulations indicate that a “breakthrough” to high electrolyser capacities is likely during the coming decades. Specifically, we find a switch in the distribution of more likely outcomes for installed capacity – shown by darker red shades in the figure above – from lower to higher capacities.

However, the timing and magnitude of this switch is very uncertain. For the EU, our simulations see a “breakthrough” occurring around 2038, on average – and, globally, around 2045. This may sound surprising given recent hydrogen hype.

However, experience from previous energy technologies – explored in our simulations – shows that it usually takes a long time for high growth rates to translate into large installed capacities.

In our research paper, we also looked at what would happen if green hydrogen expands more quickly than the world’s fastest-growing energy technologies, such as wind and solar. We asked: “What if electrolysis grows as fast as some of the fastest-growing technologies in history?”

We included a wide portfolio of technologies, ranging from US military equipment in the second world war, through to the high-speed rail network in China or highly modular technologies, such as smartphones and internet servers.

Our analysis shows that following emergency-like growth would enable green hydrogen to overcome short-term scarcity and would put the REPowerEU target within reach.

In the long run, such rapid growth rates would also close the gap between feasible green hydrogen supply and potential demand. However, it remains uncertain if such emergency-like growth can be achieved.

In a final step, we asked what would need to happen for green hydrogen to reach such unconventionally high growth rates. We found that key conditions include special coordination, dedication, regulation and funding.

For example, governments would need to urgently secure business cases for investing in green hydrogen. This could be through public financial support or through regulation, such as green hydrogen quotas.

Furthermore, the simultaneous scale-up of supply, demand and infrastructure for the production and use of hydrogen would require substantial coordination.

Recently, the world’s two largest economies have been pushing ahead with new hydrogen policies such as  the EU’s hydrogen “important projects of common European interest” (IPCEI) projects and the EU “hydrogen bank”, as well as the US Inflation Reduction Act.

These initiatives aim to break the vicious cycle of uncertain supply, insufficient demand and incomplete infrastructure. It remains to be seen whether these policies will be enough.

“Blue” hydrogen – namely, hydrogen made from gas with carbon capture and storage – could be available earlier than green hydrogen, since steam reforming of gas is well-established.

Blue hydrogen could, therefore, play at least a bridging role, enabling an early ramp-up of hydrogen infrastructure and hydrogen end-uses.

However, there are unresolved concerns about life-cycle emissions and threats of new fossil lock-ins. Furthermore, steep increases in gas prices in the EU have complicated the competitiveness of blue hydrogen.

Until the fog around availability and costs has cleared, policymakers should be aware that there remains a risk of overestimating hydrogen’s potential.

There would always be potential to expand the use cases of hydrogen if supply surpasses expectations.

Conversely, if hydrogen is being relied on to decarbonise sectors and supply falls short of expectations, it might simply be too late to switch to alternatives in time for climate targets.

This suggests the expansion of already-available and more efficient alternatives, such as direct electrification using heat pumps, electric cars and electric trucks, offers a way to hedge against the risk of hydrogen failing to deliver.