Prof David Beerling, director of the Leverhulme Centre for Climate Change Mitigation, and Prof Stephen Long from the Department of Crop Sciences and Plant Biology at the University of Illinois at Urbana–Champaign.

Achieving the Paris Agreement goals of keeping global warming to “well below” 2C, or to 1.5C, above pre-industrial levels will require rapid decarbonisation of human society.

But national commitments to rein in greenhouse gas emissions are currently insufficient to meet these agreed limits. It is increasingly likely that “negative emissions”, or “carbon dioxide removal”, technologies will be needed to take up the slack.

These techniques involve extracting CO2 from the atmosphere and storing it indefinitely. Scientists have proposed a range of different approaches and we now need realistic assessment of these strategies, what they might be able to deliver, and what the challenges are.

In a new paper for Nature Plants, we tackle an under-discussed technique of CO2 removal called “enhanced rock weathering”. Our research highlights the potential wider benefits for crop yields and soil health, and sets out a research agenda for the next steps.

What is enhanced weathering?

As you might remember from geography classes at school, chemical weathering is a natural process that continuously erodes away rocks in our landscapes and sequesters atmospheric CO2 over millions of years.

The process begins with rain, which is usually slightly acidic having absorbed CO2 from the atmosphere on its journey to the ground. The acidic rain reacts with the rocks and soils it lands on, gradually breaking them down into minute rock grains and forming bicarbonate in the process. Eventually, this bicarbonate washes into the oceans, where the carbon is stored in dissolve form for hundreds of thousands of years or locked up on the sea floor.

Enhanced weathering scales up this process. It involves pulverising silicate rocks such as basalt – left over from ancient volcanic eruptions – to bypass the slow weathering action. The resulting powder, with a high reactive surface area, is then spread on large areas of agricultural land where plant roots and microbes in the soil speed up the chemical reactions. 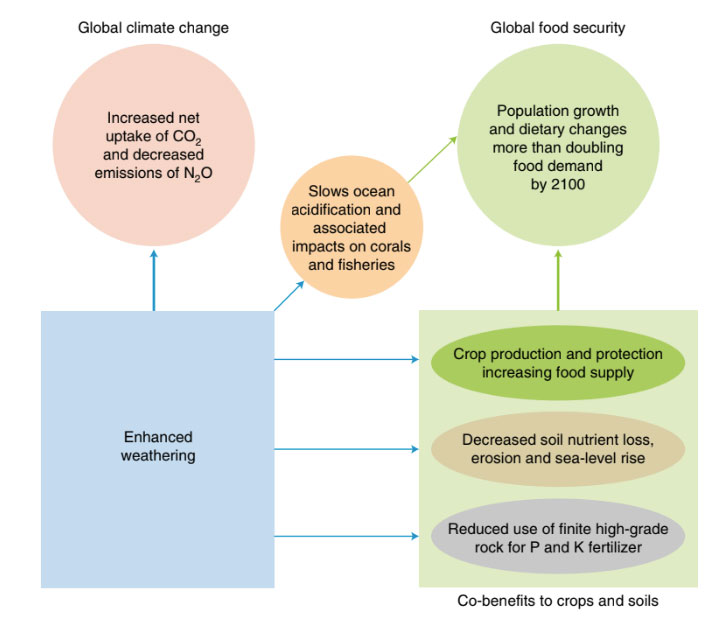 As natural rock weathering absorbs around 0.3% of global fossil fuel emissions, enhanced weathering can provide a boost to remove even more CO2 from our atmosphere.

But the potential benefits do not end there. As enhanced weathering makes water more alkaline, it can help counteract ocean acidification.

The need to cut CO2 emissions is unfolding alongside an unprecedented increase in food demand – linked to dietary changes and a growing population that may surpass 11 billion by 2100 (pdf). At the same time, farming itself a growing contributor to climate change.

Critically, enhanced rock weathering works together with existing managed croplands.  Unlike other negative emissions techniques under consideration, it doesn’t compete for land used to grow food or increase the demand for freshwater.

While enhanced weathering can be applied to any soils, arable land is the most obvious candidate as it is worked and planted throughout the year. It covers some 12m square kilometres – 11% of the global land area.

In fact, arable farms already apply crushed rock in the form of limestone to reverse acidification of soils caused by farming practices, such as the use of fertilisers. And there is a long history of small-scale farming using silicate rocks to improve crop yields in highly-weathered soils in Africa, Brazil and Malaysia.

Swapping silicate for limestone, and increasing the application rate, would do the same job to help tackle acidification, but help capture CO2 from the atmosphere at the same time.

Managed cropland, therefore, has the logistical infrastructure, such as road networks, and the machinery needed to undertake this approach at scale. These considerations could make enhanced weathering potentially straightforward to adopt.

You can see this in action in the video below from the Leverhulme Centre for Climate Change Mitigation.

Using silicate rocks as a resource in this way could also have a number of important wider benefits. These include supplying silica back into soils to improve crop health and protection from pests and diseases, and supplying nutrients to increase yields.

If realised, these benefits would reduce the usage of agricultural fertilisers and pesticides, lowering the cost of food production, increasing the profitability of farms and reducing the barriers to take up enhanced weathering for the agricultural sector.

So, in theory, there are a lot of potential upsides for using enhanced weathering. However, like many negative emissions technologies, implementation is still in its very early stages. It needs further research, development and demonstration – not just across a range of crops and soil types, but also different climates and spatial scales.

There have been some successful field tests of using enhanced weathering – though for purposes other than capturing CO2.

For example, in a 12-year study conducted in a New Hampshire forest, scientists measured the effect of spreading silicate powder as a method of accelerating recovery from acid rain. The results confirmed some of the main impacts of enhanced weathering – a rapid increase in dissolved silicate and calcium making it into streams, and alleviation of acidification in the ecosystem.

Similarly, in Mauritius, sugarcane trials as far back as 1961 added crushed basalt to soils and increased yields by 30% over five successive harvests.

There are other challenges too. The process of mining, grinding and spreading rocks on a large-scale would likely have negative environmental and ecological impacts, and would therefore require careful management. Depending on the size of the grains of powder the rocks are pulverized down to, the energy demand could account for 10-30% of the amount of CO2 sequestered. Using renewable energy sources would minimise this.

Costs, too, need to be considered. Current cost estimates are uncertain and vary widely. The most detailed analysis to date puts operational costs at $52-480 per tonne of CO2 sequestered – though these estimates are poorly constrained and improvements in crop yields and lower fertiliser needs will offset some of these costs. This compares with a $39-100 per tonne of CO2 for another, more talked-about negative emissions technology, bioenergy with carbon capture and storage (BECCS). But the potential is significant. For example, applying 50 tonnes of basalt powder per hectare per year to 70m hectares of the corn belt of North America might sequester as much as 1.1bn tonnes of CO2 in the long run – equivalent to 13% of the global annual emissions from agriculture.

Countries with considerable productive farmland have the largest potential to sequester CO2 through enhanced weathering. These include the US, China, India and Russia, which all grow crops on a massive scale and make up the highest emitters of CO2.

Scaling estimates up to a global level is tricky, but – for example – adding 10-30 tonnes of silicate per hectare per year to two-thirds of the world’s most productive cropland could take 0.5-4bn tonnes of CO2 out of the atmosphere per year by 2100. But current estimates are highly uncertain and require more research.

Human societies have long known that volcanic plains are fertile; ideal places for growing crops without adverse human health effects but, of course, with little consideration for how adding additional rocks to soils might capture carbon.

We now need to take the theory and laboratory tests out into real crop fields to see how enhanced weathering fits – practically and economically – in the wider portfolio of options for removing CO2 from the atmosphere.

However, there is still a long way to go and research in this area remains in its infancy.  Improved assessments are required to understand how much CO2 the approach would capture, how much rock is required, how much energy is required to crush and distribute the rock, and to better understand the long-term effects on soils and water courses.

We need to undertake carefully monitored assessments on arable land. For example, can we demonstrate the expected benefits to crops amidst the seasonal and annual variations in the weather?

And finally, we need to better understand the public perception of enhanced rock weathering as a strategy for carbon capture, communicate the process, benefits and risks, and understand any public concerns about what this means for our landscapes and farmlands.

This article was updated on 21/02/2018 to amend the line "natural rock weathering absorbs around 3% of global fossil fuel emissions". The correct figure is 0.3%.