Guest post: How the south Asian monsoon is changing in a warming climate

The floods hit during the south Asian monsoon, which typically brings seasonal rains to the Indian subcontinent between June and September.

Record-breaking levels of glacier melt following “phenomenal heatwaves” earlier in the year was also a key factor in swelling rivers and raising the risk of flooding.

This meltwater combined with exceptional rainfall rates, which were described by António Guterres, secretary general of the United Nations, as a “monsoon on steroids”.

In this article, we take a closer look at the south Asian monsoon, how it is being affected by human activity and how it may change in the future.

When sailing was key to worldwide trade, a seasonal reversal in winds was the defining characteristic of monsoon climates.

Most famously, the Indian monsoon would be heralded by wind flowing northward along the Horn of Africa’s coast and eastward over the Arabian sea and across India, the Bay of Bengal and east Asia. 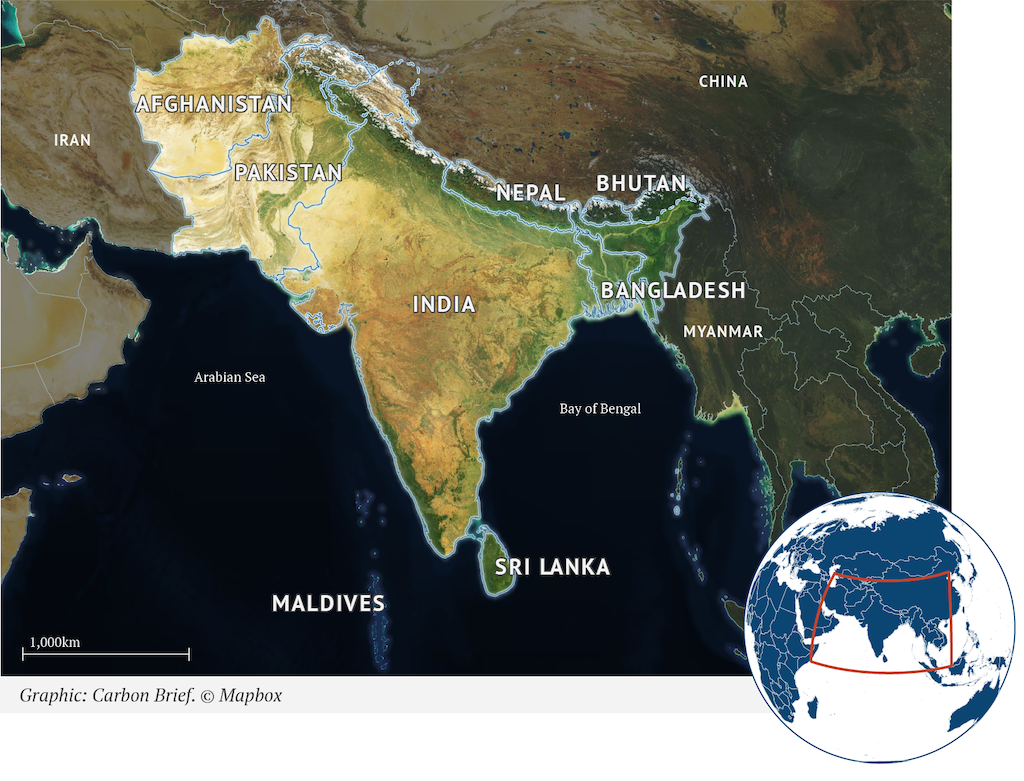 Map of South Asia. The designations employed and the presentation of the material on this map do not imply the expression of any opinion whatsoever on the part of Carbon Brief concerning the legal status of any country, territory, city or area or of its authorities, or concerning the delimitation of its frontiers or boundaries.

Nowadays, climate scientists define monsoon regions not from wind, but from rainfall. A monsoon climate is one that sees substantial rainfall, most of it concentrated during the summer season. The Americas, Africa, Australia and Asia all have monsoon climates at tropical and subtropical latitudes.

Let us consider the northern-hemisphere monsoons. During late spring and summer, northern latitudes receive much more energy from the sun than southern latitudes. In an attempt to restore balance, the atmosphere responds with a cross-equatorial circulation that dampens this energy difference by moving high-energy air in the upper layers of the troposphere from the north towards the southern subtropics.

What matters for the monsoon rains, though, is the complementary part of the circulation loop – the one bringing air in and up in the northern latitudes. Moist ocean air flows north at the surface until it is swept up in convection, forming clouds and producing sustained rainfall.

The map below shows the average date of onset of the monsoon across the Indian subcontinent, with the areas seeing the earliest dates of onset shaded in dark blue and the latest in yellow.

If this simple circulation system were to be realised, rain would fall everywhere along the same latitude band.

Instead, the geometry of continents, the location of mountains and the characteristics of the land surface all contribute to complicate matters by concentrating rainfall, creating dry zones and determining what kind of rain-bearing disturbances are most common in any given place.

For example, when the monsoon hits the Western Ghats mountains on the west coast of India, the air is forced upwards – which is known as “orographic lift”. This generates a narrow band of concentrated rainfall on the western side of the mountains and a dry “rain shadow” on the eastern side.

The Himalayas have the same orographic effect, concentrating rainfall along their slopes. However, the mountain range also plays a more fundamental role, shielding the tropical subcontinent from cold and dry mid-latitude air, thus allowing a strong monsoon to develop.

Conversely, central India – an area known as the “core monsoon zone” – receives most of its rain from low-pressure weather systems that form over the Bay of Bengal. These make landfall in north-east India and then are carried towards the north-west, crossing the peninsula and reaching as far as Pakistan. When these low-pressure systems deepen into monsoon depressions, they are responsible for extreme rainfall events.

Fewer systems form in the Arabian sea, but they can bring heavy rainfall to Gujarat and Pakistan – as happened last month during the floods. In fact, some of the world’s most intense precipitation, though relatively rare, falls when moist air from the Arabian sea flows towards the western indentation – where the arc of the Himalayas folds towards Afghanistan. At first, updrafts are capped by continental dry air; then, when air is lifted by the mountain foothills, the accumulated energy is released in very deep clouds and torrential rain.

Monsoon rainfall is highly variable at all time scales. At the shortest time scale, this includes the episodic nature of convection within a weather system and the alternating of active phases (lasting a few days) and breaks (lasting up to two weeks) in rainfall.

At longer scales, the monsoon sees interannual swings in total rainfall associated with the El Niño-Southern Oscillation and other types of natural variability.

Against this backdrop, longer-term trends appear small, but they are, nevertheless, significant and have been linked to human-caused increases in greenhouse gases and a shifting distribution of aerosols from air pollution.

In its latest assessment report on climate science, the Intergovernmental Panel on Climate Change (IPCC) said that, in general, “global monsoon precipitation has likely increased since the 1980s, mainly in the northern hemisphere”.

For the south Asian monsoon, specifically, it has seen a weakening of the monsoon circulation and a decline in seasonal average rainfall over central India between the 1950s and early 2000s. This has been attributed to the effect of local aerosol emissions, which increased dramatically as the region rapidly industrialised.

You can see this in the IPCC charts below, which show observed changes in the south Asian monsoon according to three datasets (left) and boxplots showing the attribution of those changes (right) – including natural variability (blue), greenhouse gas emissions (red), aerosols (grey) and the combined impact of all influences (black). Boxes above the line indicate a positive impact on monsoon rainfall and those below the line show a negative impact.

Aerosols can scatter sunlight either directly – as one can see on hazy days – or by changing the brightness and life span of clouds. With less energy entering the system and a reduced temperature difference between the hazy northern tropics and the clear southern tropics, the monsoon weakens.

But the observed trend is not the same throughout the subcontinent. The drying over central northern India and much of south-east Asia coincides with a weaker shift to a wetter monsoon over south-east India and Sri Lanka – as well as north-western India and Pakistan.

This wetting pattern appears to be due to a change in circulation during the early rainy season in response to aerosols emitted outside of South Asia.

Even as central India has experienced a drying trend at the seasonal scale, it also has also seen a significant shift toward heavier rainfall, falling in spells of shorter duration.

Heavy rainfall spells correlate with the presence of monsoon low-pressure weather patterns, so it is informative to look at trends in these synoptic systems.

A recent study has shown that the tracks of low-pressure systems have shifted south since satellite records started in the late 1970s, possibly because more intense moist convection affects the way in which the systems propagate themselves against the westerly wind.

The map from the study, below, illustrates the shift in systems bringing more extreme rainfall events (blue dots) in a south-east-to-north-west band extending from Andhra Pradesh to Rajasthan – and possibly into Pakistan (although limited data prevents an explicit connection between monsoon lows and extreme rainfall there).

In contrast, there have been fewer extreme rainfall events (orange dots) in the band spanning West Bengal to Uttar Pradesh.

(Low-pressure systems that form in the Arabian sea and track into western India and Pakistan are much less frequent, and trends in their tracks were not analysed.)

However, it should be noted that the attribution of these observed extreme rainfall trends to human-caused warming has not yet been formally established. This is mostly due to the limitations of climate models in the representation of intense convective systems.

This may change with the newest generation of models, whose higher spatial resolutions and improved representations of key physical processes enable them to better resolve the monsoon weather systems.

How the south Asian monsoon will change in future will depend on both the extent of global warming and how air pollution is curtailed in the region.

While greenhouse gas (GHG) emissions from human activities live long in the atmosphere, air pollution from industry and transport is continually falling out of the air or being washed out by rain. This means that future cuts to pollution will have a more immediate impact on the monsoon than reductions in GHGs.

Therefore, it is expected that the cooling effect of aerosols will lessen in future while the world continues to warm. As a result, we might expect that the aerosol-forced trends in seasonal rainfall will reverse.

So it is tempting to assume that the end of the drying trend in India in the early 2000s as a harbinger of things to come. Indeed, the IPCC noted, with high confidence, that most studies since its previous assessment in 2013 “have confirmed projected increases in south Asian monsoon precipitation”.

For example, climate models project an increase in rainfall in the south Asian monsoon of around 4% per 1C of global warming. However, it should be noted that natural variability is large in this region and so these conclusions should be taken with caution.

For rainfall extremes, a pattern of more intense rainfall interspersed with more dry periods is consistent with theoretical expectations for a warmer climate. These suggest that extreme rainfall increases with humidity – and thus with warming – even as average rainfall increases less quickly (or even decreases).

Climate models project a large increase (+58%) in the intensity of extreme one-day rainfall over south Asia and a threefold increase in the frequency of extreme rainfall by the time the world warms by 2C.

From rain to floods

Global warming has been described as a threat multiplier and this characterisation is certainly true for flood risk in the south Asian monsoon region.

The flooding in Pakistan in August is the result of glacial melt, an extreme rainfall event originating over the warm Arabian sea and an overall more intense monsoon. A new rapid attribution study has confirmed that human-caused climate change likely increased the intense rainfall that Pakistan received.

All these elements are expected to become more prominent as the globe warms and, as sea level continues to rise, water will flow out of coastal areas even more slowly.

Local governments can adapt to the increasing flood hazard by reducing exposure and vulnerability. This could include improving drainage and water storage infrastructure, reducing the number of people living in flood zones and implementing an early-warning system for floods. For example, some of these measures have been successfully implemented in Bangladesh.

But local adaptation planning must be accompanied by a global all-out effort to cut greenhouse gases emissions and limit the extent of climate change. 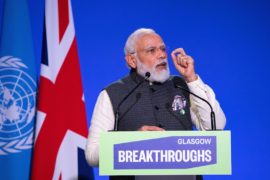