When the Met Office publishes its 2014 global temperature figure on Monday, a group of scientists will be quietly congratulating themselves for having correctly forecast the outcome.

Just over a year ago in December 2013  the Met Office forecast that 2014’s temperature would be 0.57 degrees Celsius above the long-term average, a statistical tie for the  warmest year on record. Its forecast looks set to be right on the money, agreeing with actual temperatures to within a few hundredths of a degree.

The Met Office has been predicting global temperatures one year in advance since 1999, and it turns out its scientists are rather good at this.

Carbon Brief spoke to the Met Office’s Professor Chris Folland to find out how his team forecast the hot year for 2014 and why they are forecasting that 2015 could be even hotter.

The annual temperature forecasts started out in 1999 using a simple statistical model. This uses historical climate and temperature data to work out the relationship between global temperature and things such as greenhouse gas concentrations and solar radiation levels.

The team then feed the statistical model with projections of next year’s greenhouse gas concentrations and how  Pacific weather phenomenon known as El Niño is expected to evolve, along with data on changes to solar radiation and other smaller influences. It then spits out a forecast for next year’s temperature.

More recently, the Met Office developed a more complex, physics-based model that can be set up with actual weather conditions on a particular date and then run into the future so as to forecast global temperature.

Each year the model is set up with current weather data in June and again in September, running forward into the following year. Since 2008, the final forecast is the average of these two methods.

The Met Office publishes its year-ahead temperature forecast every December along with an update showing how last year’s forecast turned out. Folland’s team has also published research explaining their methods and assessing their own performance.

Carbon Brief has updated the analysis in that research, with help from the Met Office, to check how skillful the forecasts have been. The first forecast was made in December 1999 for the temperature during 2000.

The chart below compares the forecast temperatures (light blue line) with the measured outcome (purple). 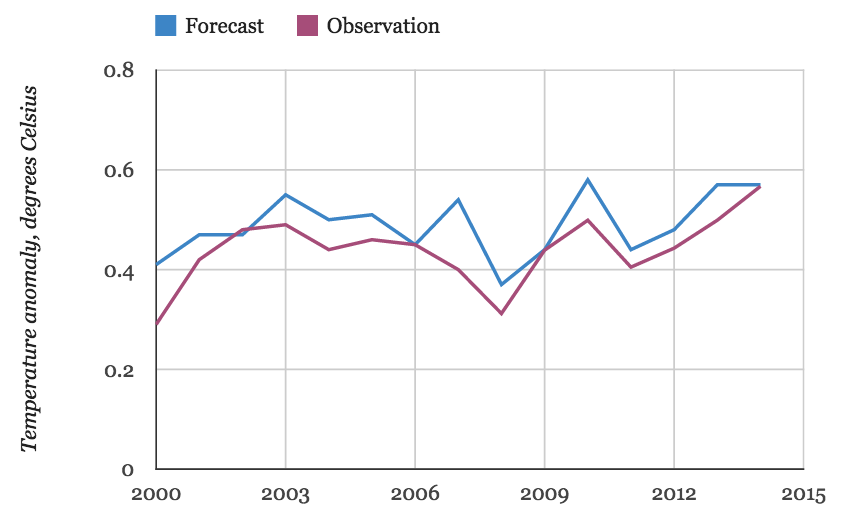 Source: Graph by Carbon Brief using data provided by the Met Office. Observations for 2014 cover the 11 months to November but are not expected to shift substantially for the full year.

As you can see from the chart, the forecasts made by Folland’s team have broadly matched the ups and downs of global temperatures since 2000. You can also see that the forecast was almost exactly right in 2002, 2006, 2009 and again in the most recent year, 2014.

But eyeballing the graph isn’t a very scientific way to assess the results. Instead, we can look at the correlation between the forecasts and the observations, and we can measure the size of the root mean squared error. If the forecast was perfect every year, the correlation score would be one and the error zero.

The correlation for the Met Office forecasts is 0.80 and the error 0.065 degrees. If you were to assume that next year’s temperature would be the same as this year’s, the correlation score would be much lower at 0.37.

In other words, the forecasts are almost as accurate as they could possibly be, given that the measurements of global average temperature are themselves uncertain. The best global temperature records have an uncertainty of about Â±0.05 degrees, only slightly lower than the 0.065 error in the forecasts.

It’s worth noting that the chart above illustrates one long-discussed problem with some global temperature records. The issue is that Met Office temperature records have poor coverage in the Arctic, which has been warming at least twice as fast as the global average. This means the observed temperature in the graph above is likely to be less than it is in the real-world.

The problem of poor Arctic data coverage has been partially corrected in other global datasets. There’s a detailed Carbon Brief explainer on these issues, if you want to read more.

Carbon Brief has compared the Met Office forecasts to the average of three more complete sets of temperature observations. As the chart below shows, this temperature data (purple line) aligns much more closely to the Met Office’s forecasts (blue line). 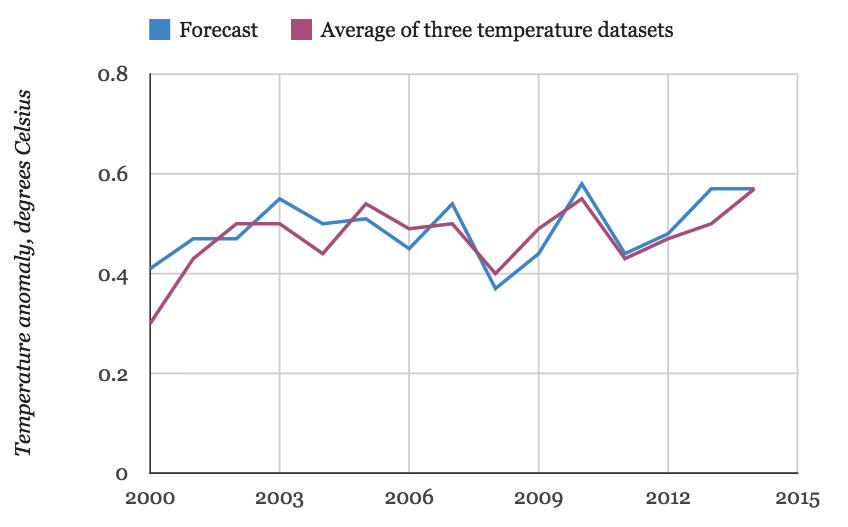 The correlation between forecasts and this combined set of observations is 0.75, while the average error is 0.048 degrees. Again, this is comparable to the error in the observations themselves. Folland tells Carbon Brief the true measure of the forecasts’ success probably lies in between the results shown in the two charts above.

So what does the Met Office forecast for this year? Its temperature forecast was published in December and has a central estimate of 0.64 degrees of warming above the long-term average.

This prediction would place 2015 more than 0.08 degrees hotter than 2014, as the chart below shows. This could be enough to make 2015 a clear warmest year on record. 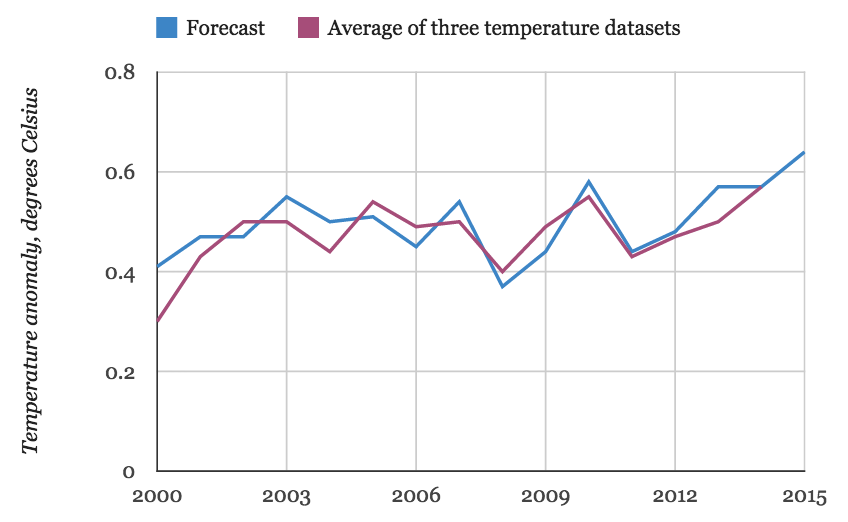 The official Met Office forecast is more cautious about the outlook for 2015, however. It says:

“Taking into account the range of uncertainty in the forecast, it is very likely that 2015 will be one of the warmest years in a series dating back to 1880.”

The main reason for uncertainty in the forecast, Folland says, turns on the Pacific weather phenomenon known as El Niño. In El Niño years, global temperatures tend to be warmer by a few tenths of a degree. In the reverse La Niña phase, temperatures are correspondingly cooler.

Scientists have dubbed this year’s El Niño “a real enigma” because it has proved so hard to predict. Early indications suggested a strong El Niño would develop during 2015, and this is reflected in the Met Office’s statistical temperature forecast. But more recent data, reflected in the Met Office’s physics-based forecast, suggest less confidence that El Niño will materialise.

“We had a lot of debate about this – obviously we are forecasting a very warm 2015. We are very much at the mercy of the El Niño uncertainty. We just don’t know what’s going to happen. If there is no El Niño there’s no doubt our temperature forecast will be too warm by about 0.05 degrees or so.”

But the temperature data shows that the world continues to heat up by about 0.02 degrees a year on average, Folland says. So, even if El Niño does dissipate and the Met Office forecast is too warm, 2015 will remain at the top end of the temperature record books.

Main image: Two deckchairs on a pebbled beach, facing out to sea.

Update 23/1: Prof Folland's final quote was amended after a request from the Met Office. The Met Office forecast for 2015 is warmer than 2014 and would nominally make it the warmest year on record. But the forecast temperature would remain within the range of uncertainty of the temperature measurements of around 0.1 degrees and so might not be statistically distinguishable as a warmest year on record. Update 22/1: we corrected a mistake in the error figure and amended the final quote from Prof. Folland. Folland, C et al., (2013) High predictive skill of global surface temperature a year ahead, Geophysical Research Letters DOI: 10.1002/grl.50169