When will the UK get a new generation of nuclear power plants? Doubts  surfaced again today with the Times  reporting a “secret government review” into French firm EDF’s plan to build a new plant at Hinkley Point in Somerset.

The review is costing tens of millions, the Times says, and is trying to establish whether EDF can complete the new plant by 2023 as it has promised.

The news follows an  announcement from EDF that its Flamanville plant in Normandy is facing further delays. The project uses identical designs to the Hinkley scheme.

Flamanville was supposed to take five years to build and  begin operating by 2012. Instead it will now take 10 years, and open in 2017. A third identical project at Olkiluoto in Finland is  nearly a decade behind schedule.

New nuclear capacity is a key part of UK government plans for decarbonisation. So why is it proving so hard to predict when the UK’s first new nuclear plant for a generation will start operating?

The Department for Energy and Climate Change (DECC) makes annual projections of the future of the UK’s energy and emissions. It has been publishing these projections for a number of years. We’ve trawled the data going back to 2007 to find out how DECC’s predictions about when we’ll get new nuclear have changed.

First, some history. The last nuclear power plant to be built in the UK was Sizewell B, completed after seven years’ construction in 1995. A hiatus followed and the government’s 2003 energy White Paper said of nuclear that “its current economics make it an unattractive option”.

By 2006 the government had shifted to a pro-nuclear stance, and in 2007 it began preparations for a new nuclear white paper that was published in 2008.

This is the point when the government began taking the idea of new nuclear for the UK more seriously. It started making assumptions and modelling projections of when the first new nuclear plant might get built.

The first attempt to put a date on it dates from 2007. This says “a small nuclear build of 1 gigawatt is projected in 2020”. The following year DECC said that:

“By 2020 the equivalent of one new station will be available with further new capacity following thereafter. By 2023 around 5 gigawatts of new nuclear capacity is projected and by 2025 close to 8 gigawatts.”

This was moderated slightly in the 2009 projections, with DECC saying that a single nuclear reactor of around 1.6 gigawatts would be “operating in 2020” with “up to” one more new station coming online per year thereafter.

DECC’s model is unable to account for commercial decisions around when to build or planned electricity market reforms. In 2009 EDF announced its intention to build new nuclear capacity in the UK. Other firms chipped in too.

In 2010 DECC said developers had announced plans to build 16 gigawatts of new nuclear capacity in the UK and that the first reactor was “scheduled to become operational in 2018”. This was more optimistic than DECC’s modelled projections, but after all, predicting the future of energy is really hard.

In 2012 and 2013 the DECC projections were revised again, this time in a more optimistic direction, bringing the start date forward from 2022 to 2020. These projections follow the 2011 publication of the government’s proposed electricity market reform, that anticipated a role for new nuclear.

The EMR package appears to have taken a more direct approach to predicting how much nuclear we’d have in the future. The nuclear projections calculated in 2012 and 2013 appear to have been assumed to be in place rather than modelled.

Finally, DECC’s most recent 2014 projections were published in October, bringing us up to date. They follow the announcement of the Hinkley Point deal with EDF signed late last year. These results show new nuclear starting three years later, in 2023. This is the date that EDF has promised to start running Hinkley point.

To make it easier to visualise how DECC’s expectations for new nuclear have changed, we’ve charted the data below. Working from the bottom of the chart to the top we can see the progression, starting in 2007 and finishing in 2014. The size of the bubble is proportional to the projected capacity. 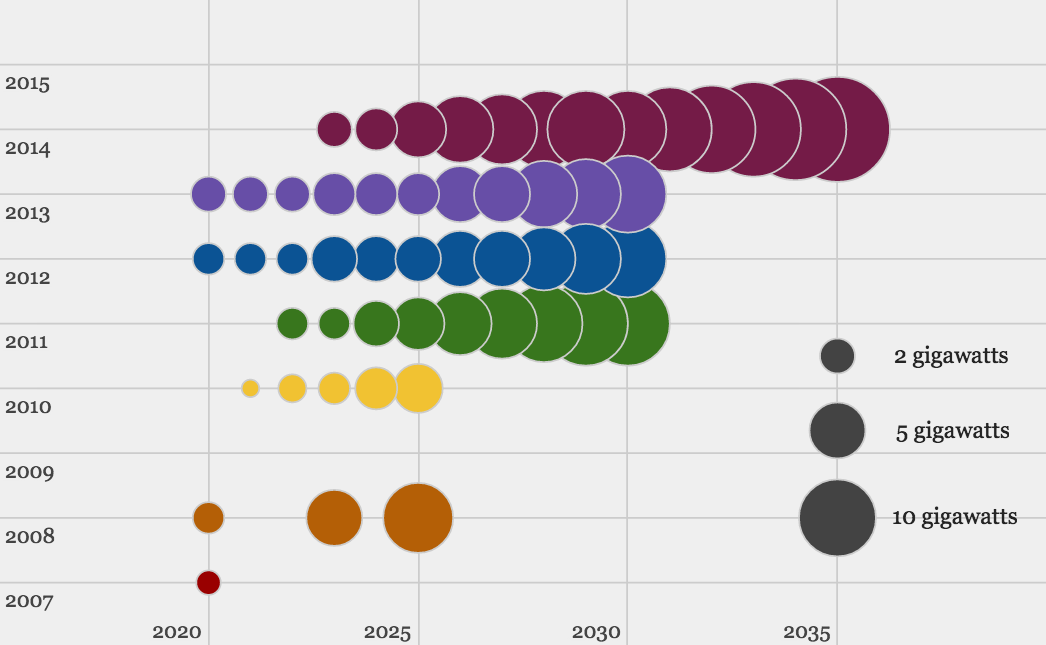 You can see from the chart above that DECC has had to push back the expected start of new nuclear from 2020 to 2023.

It’s worth emphasising of course that the Hinkley Point reactors are not yet under construction. EDF had originally said it would finish building them in 2017, indeed chief executive Vincent de Rivaz said some people would be cooking their 2017 christmas dinner using new nuclear power.

De Rivaz now says the project will be finished in 2023. Preparatory groundwork has already started. Carbon Brief asked EDF when construction of the plant itself will begin and how long it will take to finish. EDF said that level of detail was not yet available.

The cost of UK new nuclear

It isn’t only the finish date that has changed for the UK’s new nuclear plans. The costs have also skyrocketed.

Back in 2008 the white paper on new nuclear in the UK suggested it would cost Â£2.8 billion to build a first of its kind 1.6 gigawatt plant, with a range of between Â£2 and Â£3.6 billion.

The government later said in 2013 that the the Hinkley C project of two 1.6 gigawatt reactors would cost Â£16 billion. When the European Commission gave the deal the green light in October it said the project would cost Â£24 billion.

EDF’s new nuclear plants at Olkiluoto in Finland and Flamanville in Normandy have been beset by delays and cost overruns. In the circumstances it is not surprising the government has asked for a second opinion on the likely start date for the UK’s first new reactor for a generation.

The Times says “engineering consultants and nuclear specialists from several companies” are looking into the likelihood that EDF can meet its promised 2023 deadline and that the review will be completed by the end of this year.

EDF has delayed its final decision on whether to build at Hinkley Point until after this review has given it the all-clear. Until then, it will not divulge detailed timelines for its plans.