The global oil market is entering a new phase where cheap oil is failing to ignite growth in demand, the International Energy Agency (IEA) says.

Market dynamics suggest oil demand should increase strongly in response to  falling oil prices, which have halved since last summer. But the IEA argues oil markets are entering a “business-as-unusual” phase, where the usual rules of supply and demand have changed.

“The recent price decline is expected to have only a marginal impact on global demand growthâ?¦ Projections of oil-demand growth have been revised downwards, rather than upwards, since the price drop.”

This phase will see oil demand continue to grow at 1.2 per cent per year to 2020, well below the near-two per cent rate of growth before the global financial crisis. There a range of reasons for this shift.

“Changing technologies and tightening environmental constraints are combining to create a ‘new age’ of lower oil demand growth and diminishing oil intensity, where less oil is required to produce a comparable amount of economic output.”

The chart below shows how global economic growth (purple line, below) has outpaced, and is expected to continue outpacing the growth in oil demand (blue line). The result is lower oil intensity (light blue bars, right hand axis), which is expecteded to fall by a third between 2008 and 2020. 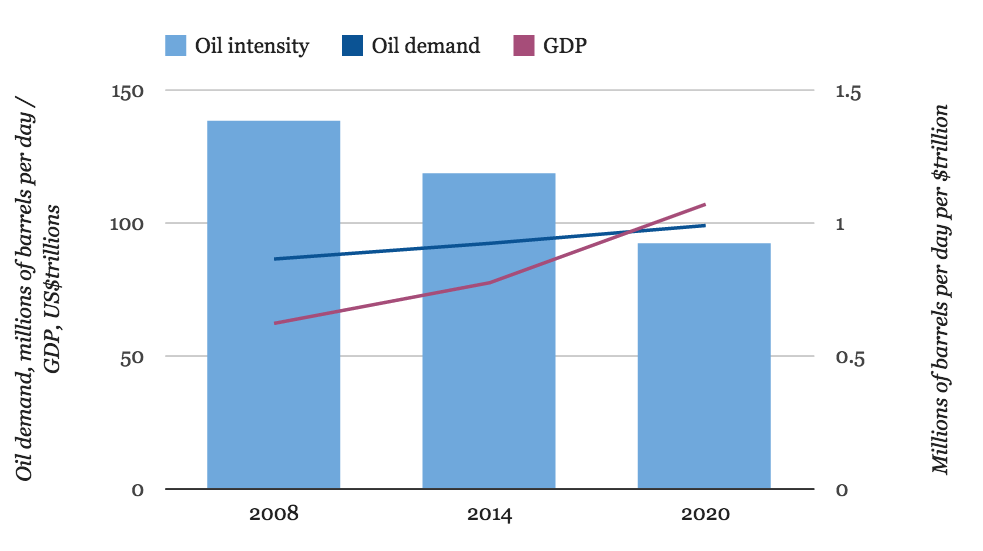 Oil demand is falling in rich nations because of ageing populations, improved city design, environmental rules, vehicle efficiency standards and structural shifts, such as the growth of online shopping. Fuel switching towards gas and electric vehicles are also a factor, the IEA says.

Emerging economies are more than offsetting demand reductions in rich nations, says the IEA. They will continue to do so, though the pace of growth will be slower than previously expected.

The idea that developing countries would follow the path taken by rich nations as they industrialised has been “proven wrong”, the IEA says. Instead, they are forging their own less oil-dependent path to development and “leap-frogging” old economic models.

“One simply cannot extrapolate from past experience (historical patterns of oil demand versus GDP per capita in mature and newly industrialised economies) to project future demand from emerging markets. The broader technological and economic context has changed, and this changes everything.”

These shifts are particularly apparent in China, previously a key driver of increasing oil demand. The IEA says it has entered a new, less oil-intensive stage of development. Demand there is expected to grow at 2.6 per cent each year over the six years to 2020, roughly half the rate over the previous six years.

“Due to the legacy of years of sustained record-high oil prices, the world has become in general much less oil-intensive, and oil’s place in the fuel mix is eroding.”

This move will hardly be reversed by cheap oil, the impact of which has, in any case, been blunted by a range of factors, the IEA says.

Many oil-importing countries have used the fall in prices as an opportunity to cut oil subsidy rates, including India, Indonesia, Malaysia, Egypt, Thailand and Morocco. China has imposed additional consumption taxes, again stamping down on the expected increase in demand. Currency fluctuations have had an impact too. A 15 per cent increase in the US dollar means only part of the dollar-denominated price reduction has been passed on to consumers.

The outlook for oil demand remains relatively weak, with the prospect of global climate talks in Paris in December. Mitchell tells Carbon Brief:

“Paris, however it works out, is bound to reduce demand for fossil fuels. How, which and by how much remains to be seen.”