The head of the United Nation’s climate body has called for a thorough assessment of the feasibility of the international goal to limit warming to 1.5C.

Dr Hoesung Lee, chair of the Intergovernmental Panel on Climate Change (IPCC), told delegates at a meeting in Geneva, which is designed to flesh out the contents of a special report on 1.5C, that they bore a “great responsibility” in making sure it meets the expectations of the international climate community.

To be policy-relevant, the report will need to spell out what’s to be gained by limiting warming to 1.5C, as well as the practical steps needed to get there within sustainability and poverty eradication goals.

More than ever, urged Lee, the report must be easily understandable for a non-scientific audience. The IPCC has come under fire in the past over what some have called its “increasingly unreadable” reports.

In between the main “assessment reports” every five or six years, the IPCC publishes shorter “special reports” on specific topics. Past ones have included extreme weather and renewable energy.

The IPCC was “invited” by the United Nations Convention on Climate Change (UNFCCC) to do a special report on 1.5C after the Paris Agreement codified a goal to limit global temperature rise to “well below 2C” and to “pursue efforts towards 1.5C”.

The aim for this week’s meeting in Geneva is, in theory, simple: to decide on a title for the report; come up with chapter headings; and write a few bullet points summarising what the report will cover.

On day two of three, Carbon Brief understands six “themes” have emerged as contenders. Judging by proceeding so far,  it seems likely that the feasibility of the 1.5C goal features highly on that list.

Referring to a questionnaire sent out to scientists, policymakers and other “interested parties” ahead of the scoping meeting to ask what they thought the 1.5C report should cover, Lee told the conference:

Speaking in Geneva yesterday, she told delegates she felt “proud, but also somewhat concerned” about the outcome of the Paris talks. She said:

“I was there. I know the reason why it was done…[P]arties were keen to do even better, to go faster, to go even further…The word ‘feasibility’ is not in the Paris Agreement, is not in the decision. But that’s really what it is [about].”

Dr Andrew King, a researcher in climate extremes at the University of Melbourne, echoes the call for a rational discussion about the way ahead, now that the dust has settled after Paris. The question of what it would take to achieve the 1.5C goal has been largely sidestepped so far, he tells Carbon Brief:

“I think one unintended outcome of the Paris Agreement was that it made the public think limiting warming to 1.5C is possible with only marginally stronger policy from government on reducing emissions and this is simply not the case.” 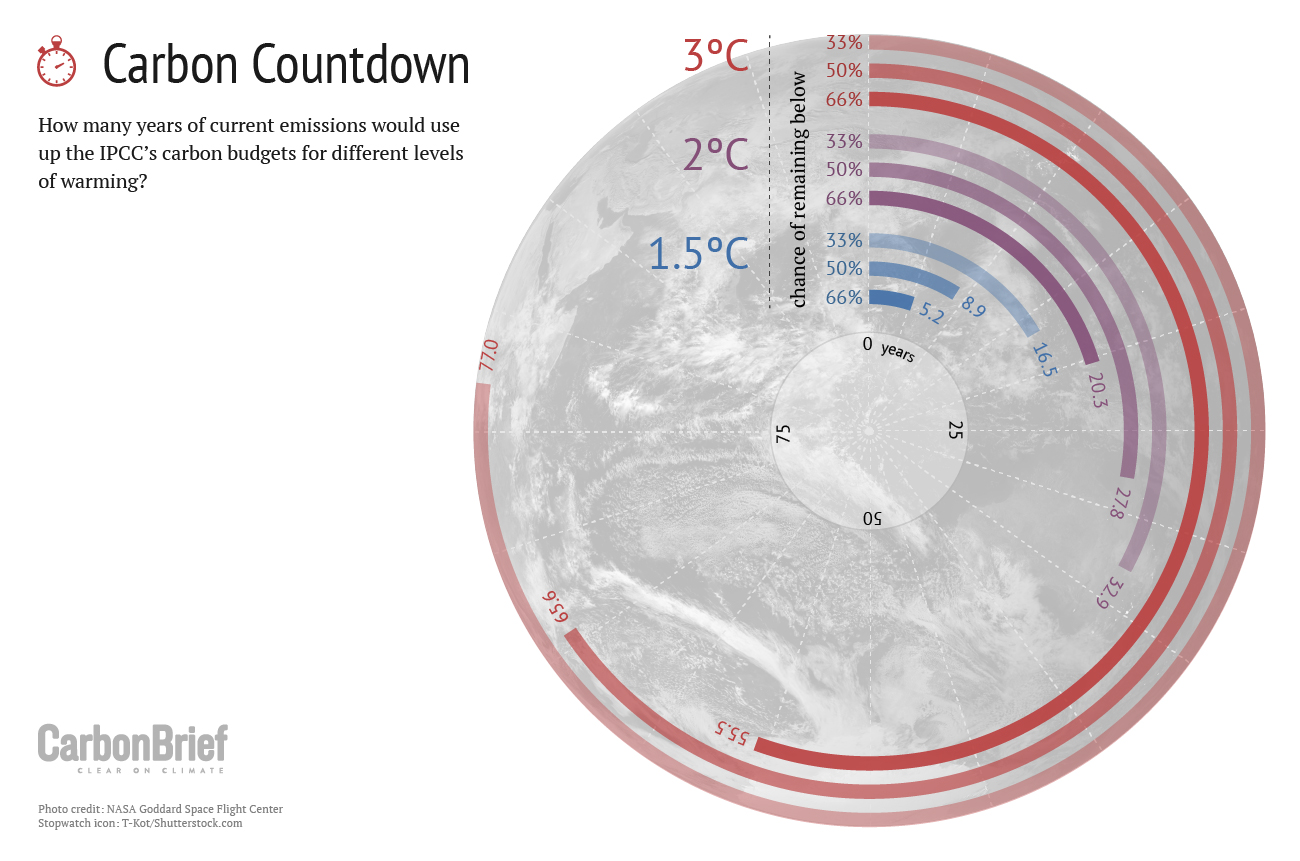 The reality is that staying under the 1.5C threshold is now nigh-on impossible, says King. Meeting the 1.5C target now means overshooting and coming back down using negative emissions technologies that “suck” carbon dioxide out of the air. The report will need to be explicit about this, he says.

King is cautious about overstating the world’s ability to meet the 1.5C goal, given that no single technology yet exists approaching the scale that would be required. He tells Carbon Brief:

“We will need negative emissions on a large-scale and for a long period of time to bring global temperatures back down to 1.5C. This isn’t possible with current technologies.”

Earlier this year, Carbon Brief published a series of articles on negative emissions, including a close up on the most talked-about option – Bioenergy with Carbon Capture and Storage (BECCS) – and a survey of which technologies climate experts think hold the most potential.

The first study to compare the consequences at both temperatures found that an extra 0.5C could see global sea levels rise 10cm more by 2100 and is also “likely to be decisive for the future of coral reefs”.

“We need to know more about the benefits of limiting warming to 1.5C. If scientists can demonstrate to policymakers that we would see significantly fewer and less intense extreme weather events by putting the brakes on our emissions then it might lead to the necessary action to protect society and the environment from the worst outcomes of climate change.”

The timing of the 1.5C special report is critical, said Lee yesterday. Due for delivery in September 2018, the IPCC’s aim is that the report should be “in time for” the UNFCCC’s “facilitative dialogue” scheduled that year.

This will be the first informal review under the global stocktake – a process that will enable countries to assess progress towards meeting the long-term goals set out under the Paris Agreement.

“You can be sure that the report, when it is available in two years’ time…will attract enormous attention. So you have a great responsibility.”

Any scientist wishing their research to be included in the special report on 1.5C will need to submit it to a peer-reviewed journal by October 2017, and have it accepted for publication by April 2018, according to the IPCC’s timeline.

The scientific community is already mobilising behind this tight deadline. An international conference at Oxford University in September will see scientists, policymakers, businesses and civil society gather to discuss the challenges of meeting the 1.5C goal, which the organisers say “caught the world by surprise”.

More than ever, the IPCC should strive to communicate the special report on 1.5C as clearly and accessibly as possible, Lee told the conference yesterday.

Given the primary audience will be non-specialists, the authors should think from the outset about how FAQs (Frequently Asked Questions) and graphics could be used to best effect, he said.

“The special report on 1.5C is not intended to replicate a comprehensive IPCC regular assessment reports. It should be focused on the matter at hand.”

The importance of the 1.5C topic calls for a different approach to previous IPCC reports, says King. He tells Carbon Brief:

“The report will fail to have much effect if the findings aren’t communicated well to policymakers and the public. This could be seen as a failing of the climate science community in the past. It has led to much weaker action on reducing climate change than is needed; this report needs to change this.”

A couple of recently published papers might give the authors some food for thought on this point.

The first study looks at how the process by which governments approve the IPCC’s Summaries for Policymakers (SPMs) affects their “readability”. Of the eight examples the study considers, all got longer during the government review stage. On average, they expanded by 30% or 1,500-2,000 words. The review process improved “readability” in half of cases, though all eight scored low for “storytelling”.

A second paper explores the power of visuals for communicating climate science to non-specialists, and highlights where the IPCC may be falling short. Giving the examples below from the IPCC’s third and fourth assessment reports, the paper notes:

“A feeling of confusion among non-climate students is certainly not congruent with positive engagement yet this emotional state was frequently reported for SPM visuals.”

Images and infographics can be powerful, but only if the trade-off between scientific credibility and ease of understanding is carefully handled, the paper concludes. With all this mind, the scientists will leave the Geneva conference on Wednesday and prepare an outline for the 1.5C report based on their discussions over the previous three days.

They will submit the proposed plan to the IPCC panel at its next meeting in Bangkok in October. If the outline meets the panel’s expectations, it will accept it and things move forward. If it falls short, they can request changes be made. The discussions in Geneva are, therefore, unlikely to be the last word.