Greenhouse gases began warming the world’s oceans in the early 1800s, decades earlier than previously thought, according to a new study.

Scientists generally regard the later part of the 19th century as the point at which human activity started influencing the climate. But the new study brings that date forward to the 1830s.

The study, published today in the journal Nature, draws on a new record of tropical sea surface temperature dating back to 1500, captured in fossilised corals and tiny marine organisms.

The findings suggest the climate system responds to greenhouse gases quicker than thought, say the authors, with consequences for understanding future climate change.

When human society began to industrialise, we started to change the chemistry of the atmosphere by adding CO2 to the air, the authors of today’s paper begin.

But knowing how much warming we’ve seen means comparing temperatures now to a time before the world started to feel the effects of industrialising. Scientists refer to that baseline period as “pre-industrial” and the period since then as the “industrial era”.

But defining these terms is fraught with difficulty, the paper explains:

“Determining an unambiguous time for the start of the industrial era is difficult, and forms part of the debate over a formal definition of the Anthropocene.” 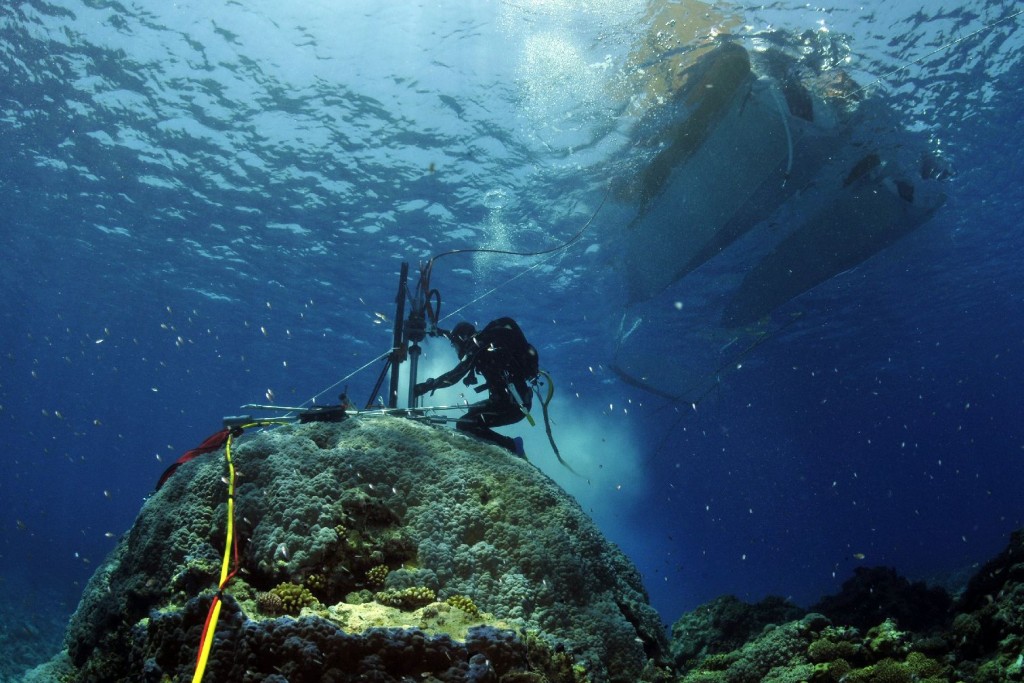 What we think of as the modern temperature record is made up of many thousands of measurements from the air above land and the ocean surface, collected by ships, buoys and sometimes satellites, too.

To shed light on the difficult question of when human-caused warming began, the authors of the new study make use of a different type of temperature record.

Corals and tiny fossilised marine organisms buried in the seabed act as natural recorders of past ocean temperatures. Along with tree rings and ice cores, which offer a window into land temperatures throughout Earth’s history, these are all examples of “climate proxies”.

Adding in the information from the proxies extends the instrumental temperature record in today’s study back in time to 1500AD. It is different from previous studies that use climate proxies because it uses a brand new temperature reconstruction for the tropical oceans.

Oceans are important for understanding global climate because more than 90% of the heat reaching Earth’s surface ends up there. Changes in how much heat the oceans take up is one reason why we see periods of faster and slower temperature change throughout Earth’s history.

Even supposing scientists had a perfect data record going back far enough, pinpointing a start date on the industrial era would still be tricky. This is because detecting a climate change “signal” in the temperature record isn’t necessarily the same as when the warming actually began.

The point at which a trend becomes clear within the average temperature data for a given region – known as the “time of emergence” – depends on when the source of the warming begins, how fast it happens and the amount of background “noise” obscuring the signal.

Natural fluctuations in the climate from one year to the next, for example, can mean a trend might only be detectable several decades after whatever is driving it begins to have an effect.

The instrumental temperature record shows the signal of rising temperatures emerged in the tropical ocean in about the 1950s. Today’s study uses the extra information captured in the proxy record to trace the start of the warming back a full 120 years, to the 1830s.

Prof Nerilie Abram, a researcher of Earth’s past climates at the Australian National University and the study’s lead author says:

“Somebody living in the 1830s or even the 1890s would not have been able to distinguish that there was this change afoot,” she says. “It’s by having this long record now that extends almost 200 years from that point that we can go back and say ‘Well, this was when the changes first started.’”

Warming in the Arctic also began in the early 1830s, the paper says, although the signal doesn’t emerge clearly in the temperature record for 100 years because of the “noise” coming from natural variability. The Arctic is where scientists are seeing the fastest temperature rise, known as Arctic Amplification.

The Southern Hemisphere showed a more sluggish response, with warming starting in the late 1890s and a clear signal not emerging until the 1960s. While parts of Antarctica have warmed – notably the Antarctic Peninsula and West Antarctica – there is no clear fingerprint of warming across the continent as a whole, the paper notes. The important point the study makes is that the onset of warming in the tropical ocean in the 1830s is earlier than is typically assumed from the instrumental record and from other proxy reconstructions that have focused mainly on Northern Hemisphere land temperatures.

Dr Ed Hawkins, a researcher at the University of Reading who was not involved in the study, says it shows a period of “sustained warming” began in the early 19th century and continues until today. He tells Carbon Brief:

“This signal of warming emerged above the noise of background variability during the 20th century for most parts of the globe. This is further evidence that the climate has already changed significantly since the pre-industrial period.”

Hawkins has also published work on “time of emergence”. But instead of looking back through history, he looks ahead to when temperature and rainfall in different parts of the world are likely to emerge from current natural variability.

Keen not to jump to conclusions about the source of the warming in the early 1830s, Abram and her colleagues used climate models to examine what kinds of external factors could be responsible.

Up until the early 19th Century, a series volcanic eruptions were causing the Earth to cool. Some warming followed as the climate readjusted itself, but it isn’t enough to explain what happened after, explains co-author Dr Nicholas McKay from Arizona University.

“If you run the models with only volcanoes and no increases in greenhouse gases, you see a warming, starting in the early 1800s. But then it levels off, and you don’t see that warming continue through the 20th Century.”

Only by including greenhouse gases in the model do the scientists see a pattern of warming that matches what the proxy records suggest the world actually experienced, McKay says. Knowing how quickly the Earth responded to greenhouse gases at the start of the industrial era tells scientists a lot about the sensitivity of the climate system.

Pinning a number on how much global temperature rises in response to a doubling of carbon dioxide – known as the climate sensitivity – is a big question in climate science as it helps more accurately predict how much warming we’ll see in future.

But while today’s study suggests the world’s oceans are more sensitive than previously thought, there is an element of good news to take from that, say the authors. If we can reduce greenhouse gas emissions, there might just be some regions where we could see quick paybacks, proffers Abram.