It won’t happen quickly – probably taking several centuries, say the researchers. But beyond a certain point, the process will be unstoppable, they warn.

Scientists know from satellite data that Antarctica is losing ice – more than 70 billion tonnes of it between 1992 to 2011.

But ice loss isn’t happening at the same speed everywhere on the continent. Together with glaciers in the Antarctic peninsula, thinning glaciers along the Amundsen Coast on the West Antarctic Ice Sheet (WAIS) are responsible for most of Antarctica’s contribution to sea level rise, which currently totals about 0.27 mm per year. 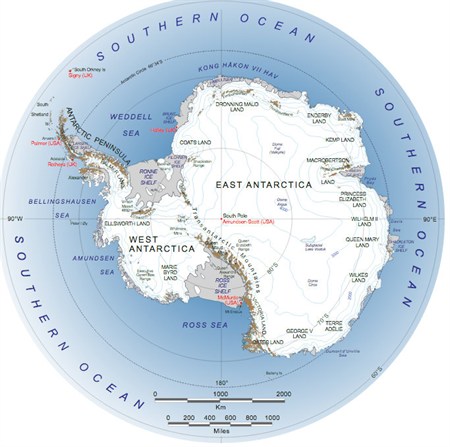 About a decade ago, scientists identified the WAIS as potentially the most sensitive to “collapse” under the pressure of rising temperature. Collapse means that the ice sheet will eventually lose all of its ice.

Lots of research has gone into finding out whether we’re close to that point or if there are other processes keeping it stable, at least for now. Ice sheets are kept stable, in part, by shelves of ice which extend from glaciers around the edge of the ice sheet. They act as buffers, helping to keep the icy interior in place.

The Thwaites glacier and ice shelf is one of a few that help prop up the WAIS. But Thwaites is already retreating and losing the thin ice at its edge, according to the new paper. The problem is not so much this initial melt, it’s what happens once the thicker part of the ice shelf begins to melt. At some point, a critical threshold is reached, triggering more rapid thinning and ice loss.

Scientists liken the mechanism to pressure building up behind a plug, which eventually gives way. This may already happening at a neighbouring glacier, the Pine Island Glacier, the paper says. How much? How fast?

The new paper uses a model of the WAIS to simulate how quickly the Thwaites glacier and the rest of the region will change under both fast and slow warming scenarios.

The slowest warming has very little impact over the 21st century, but observations suggest this is a far too optimistic scenario. Measurements of current melt rates on the Thwaites glacier are more in line with the highest warming scenario tested, say the researchers.

The scientists found that this high melt rate scenario – which at the moment looks the most plausible – delivers 0.25 millimetres of sea level rise per year.

After another couple of centuries, melting speeds up to more like 1mm per year, and melting reaches the critical threshold. How quickly ice is lost after this point is hard to model, say the researchers, especially because interactions with other basins become important.

Just the Thwaites glacier on its own would raise sea level by about 60 cm if it melted completely, say the scientists. But they estimate that if the whole WAIS disappears, it could add another three to four metres of sea level.

Accounting for the fact that the accumulation of ice through snowfall is projected to increase over the 21st century delays the transition to more rapid melt  – but only by just under a decade, the scientists estimate.

For all but the very lowest melt rates, the new research suggests the early stages of collapse are already underway. But the authors stress that while they expect the ice sheet to behave the way they outline, they’re less certain about the timing. The process of total collapse will take centuries to millennia, though new study suggests it’s likely to be the former.