UK coal use is likely to soon fall back to levels last seen during the industrial revolution, Carbon Brief analysis of official figures suggests.

The UK used 49 million tonnes of coal in 2014 according to Carbon Brief estimates. That’s more than a 20 per cent reduction compared to the previous year, and the joint lowest coal use in  records going back to the 1850s. Only 2009, when the country was in the depths of the financial crisis, had equally low coal consumption.

There are several reasons to expect coal use to continue falling this year, suggesting a clear historic low is in store for 2015.

Getting out of coal as quickly as possible is necessary in developed countries, to prevent dangerous global warming. To assess UK progress we’ve looked back at its changing relationship with coal, and what that means for the climate.

Coal use grew rapidly during the 19th century as the industrial revolution took off and the UK’s population increased. A coal-hungry nation used the fuel to produce town gas for lighting from the 1810’s, and to power the explosion in rail travel from the 1840s. 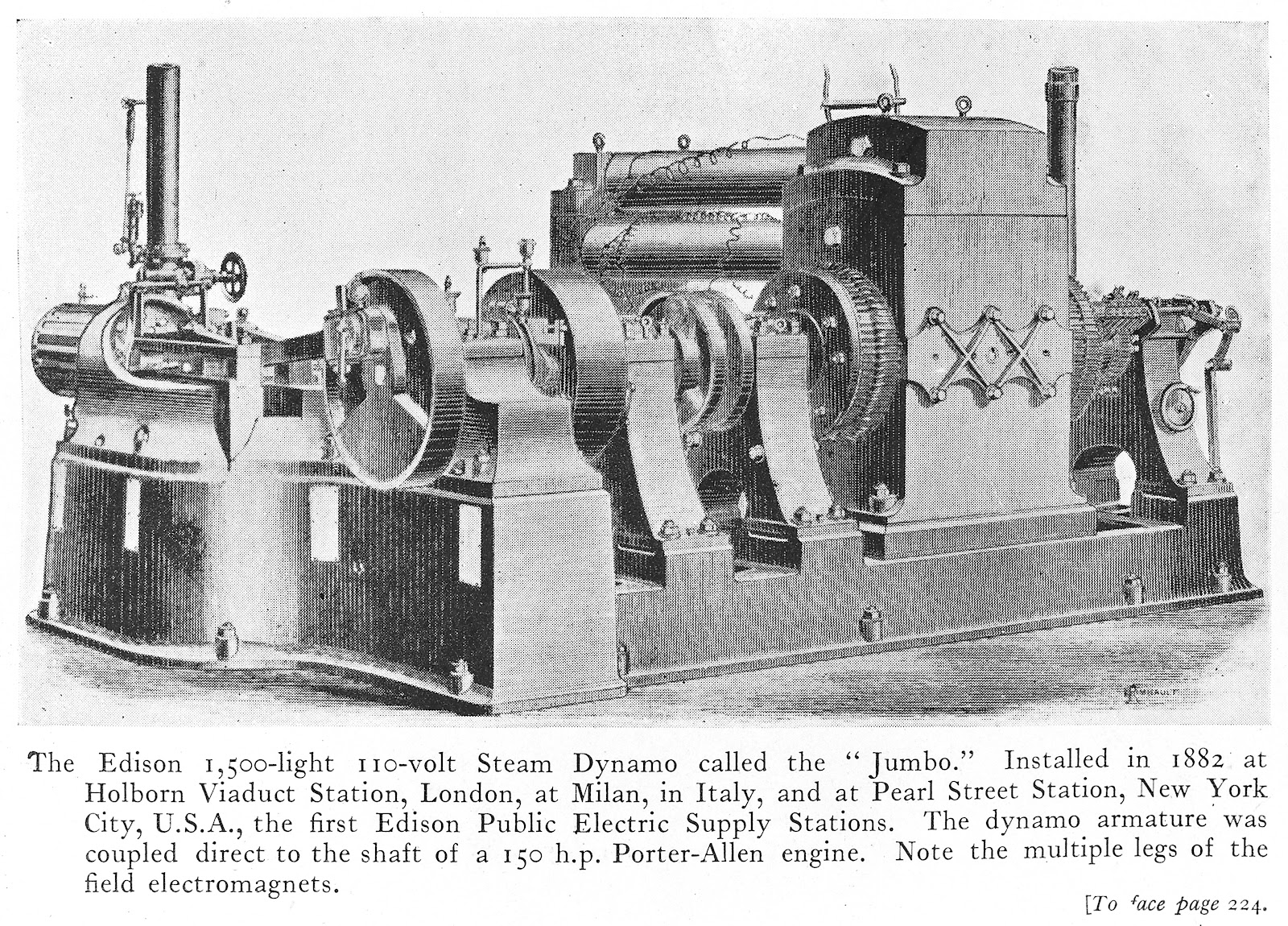 The 1880s saw the dawn of today’s centralised electricity generation model, with a plant containing a coal-fired generator called Edison’s Jumbo opening at Holborn Viaduct in London in 1882, pictured above.

You can see the impact of all these changes in the steep rise in 19th-century coal use on the timeline below. Credit: Rosamund Pearce/Carbon Brief using figures from the  Department for Energy and Climate Change and Carbon Brief calculations based on  European electricity use data.

Coal use more or less plateaued for the middle decades of the twentieth century, with small ups and downs during the general strikes of the 20s and depression of the 30s. Economic growth of the post-war ‘golden age’ saw coal use reach a peak in 1956. But that same year, the UK Clean Air Act was passed and the tide began to turn against coal’s expansion.

What we’ve used coal for

The details underlying the big picture presented above can be seen more clearly in more detailed sectoral coal use data, which goes back to 1943 and is plotted in the chart below.

The chart shows two sets of competing influences in post-war UK coal use, one pushing use up and the other down. 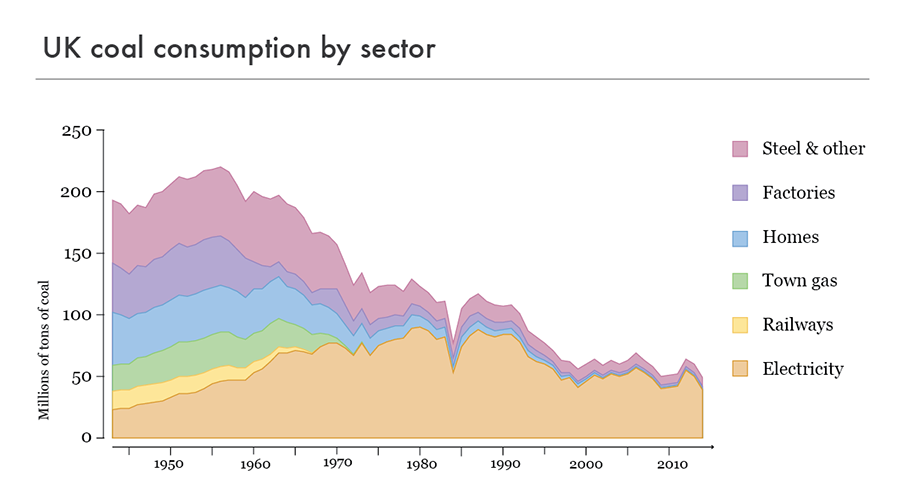 Source: Carbon Brief calculations using figures from the Department for Energy and Climate Change and European electricity use data

On the upside, overall coal use for electricity generation (shown in orange, above) continued to grow rapidly during the 1950s and 1960s in order to meet the demands of a growing population and their new-found desire for fridges, TVs and washing machines.

On the downside, the Clean Air Act forced the closure of central London power stations like Battersea and Bankside, now home to the Tate Modern. The Act’s ban on coal use for home heating (blue area) also contributed to the eventual coal use decline.

Other downside factors include the end of steam-powered rail travel in the 1960s (yellow area), the economic impact of oil shocks in the 1970s and the decline of British industry.

The mid-60s brought two more key milestones with the expansion of nuclear energy and the discovery of North Sea natural gas. Cheaper, cleaner natural gas and the construction of pipelines to distribute it spelled the end for dirty, coal-derived town gas and later sparked the newly-privatised electricity sector’s dash for gas in the 1990s.

After 2011 there was a mini-revival in coal use on the back of cheap coal prices that resulted mainly from over-supply and were not matched by cheap gas. The latest government data and Carbon Brief estimates show this mini-revival was decisively ended during 2014, when coal use was 22 per cent below 2013 levels and equal to the lowest use on record.

Looking to the future

UK coal use is now dominated by electricity generation, with most of what isn’t used for power being used in steelworks. Power stations used around 39 million tonnes in 2014, 80 per cent of the total. That’s the lowest tonnage burned to generate electricity since 1952, the year of London’s great smog.

The unexpected closure of Ironbridge and Ferrybridge power plants last year following fires caused a temporary reduction in coal demand. In the longer term there are four major factors that could cause more permanent falls in coal use for electricity.

First, the UK’s drive to decarbonise. The UK’s largest power station Drax is receiving subsidies to replace coal with biomass, mostly woodchip imported from north America. It had switched over one-third of its four-gigawatt capacity to biomass by last autumn and plans to go further during 2015/16. This represents a large, permanent reduction in coal demand.

Second, 4,500 megawatts of coal capacity failed to secure government capacity payments that would have paid them to remain open during winter 2018/19. Third, EU rules will eventually force plants to close, or install costly pollution controls.

The fourth and most decisive factor is changes in the relative price of coal- versus gas-fired electricity, known as the clean-dark spread. Coal prices falling while gas prices increased in 2011-13 caused the mini coal revival discussed above.

By 2013 this price differential meant coal-fired power stations could generate a megawatt hour of electricity for roughly Â£20 less than a gas plant.

But more recently it is gas that has been getting cheaper without a parallel fall in coal prices. In 2014 coal’s price advantage fell to around Â£10 per megawatt hour, causing significant amounts of coal to gas switching in the electricity sector – particularly last summer. This shift was driven by a fall in UK wholesale gas prices.

The futures price to secure gas contracts through 2015 is similar to the low prices that prevailed for much of last year. This means coal’s price advantage could fall below Â£10 per megawatt hour even before the government’s supplementary carbon tax the Carbon Price Floor increases in April 2015. At that point coal will lose a further Â£4.50 per megawatt hour advantage relative to gas.

These are rough numbers, based on average annual prices and average efficiency power stations, yet even so there seems to be scope for further coal to gas switching barring an unexpected turnaround in gas prices.

Given the Carbon Price Floor increase a reversion to coal looks less likely. That puts the UK on course for an all-time record low in coal consumption during 2015. Department for Energy and Climate Change projections see an end to coal use for electricity generation by 2023 if low gas prices persist.

Coal is the dirtiest fossil fuel and its use has been a key driver of UK carbon dioxide emissions over the years. It drove soaring emissions during the 1800s that topped 400 million tonnes per year by 1899.

Perhaps surprisingly, UK carbon dioxide emissions were as high as today’s in the first few years of the twentieth century. Although there were fewer people back then they were burning a lot more coal. Emissions tracked the coal use plateau through the middle of the twentieth century, until the rise of the motor car and the post-war boom years took over.

So are we just back to where we started? Well, no. The optimistic view is that the UK’s population has grown by around half since the late 1930s while the economy has become five times larger. That means per capita emissions and the emissions needed to create each pound of wealth have fallen dramatically. UK per capita carbon dioxide emissions were roughly 10 tonnes in the 1930s. They reached a peak of around 11.5 tonnes in the mid-60s and have fallen to around seven tonnes today.

The fall in coal use in 2014 contributed the majority of a 10 per cent cut in total UK carbon dioxide emissions in the year to October 2014 against the previous year, the latest DECC figures show.

But the pessimistic view is that as UK coal use has plummeted, China has more than taken up the slack. Its per capita coal use of nearly three tonnes per year is about the same as seen in the UK way back in the 1850s.

As we’ve seen, UK coal use remained at a similar level for much of the twentieth century. If we want to avoid dangerous warming, we cannot afford for the rest of the world to take the same path.