Although this summer’s Arctic sea ice melt has exceeded records and expectations, scientists have yet to announce that the sea ice has reached its summer minimum extent. Sea ice extent has continued to decline during September, reaching below four million square kilometers early in the month.

After successive years of melting, the consequences are likely to be felt further afield – with scientists suggesting weather patterns in the northern hemisphere may be altered. But the opening of the ice has also had some immediate impacts closer to home – providing new opportunities for navigation and to extract more fossil fuels.

Walt Maier, research scientist at the US National Snow and Ice Data Center (NSIDC), tells the Guardian that we can expect the official announcement of the summer sea ice minimum and a record loss at some point this week. Here’s how the sea ice extent graph looks today: 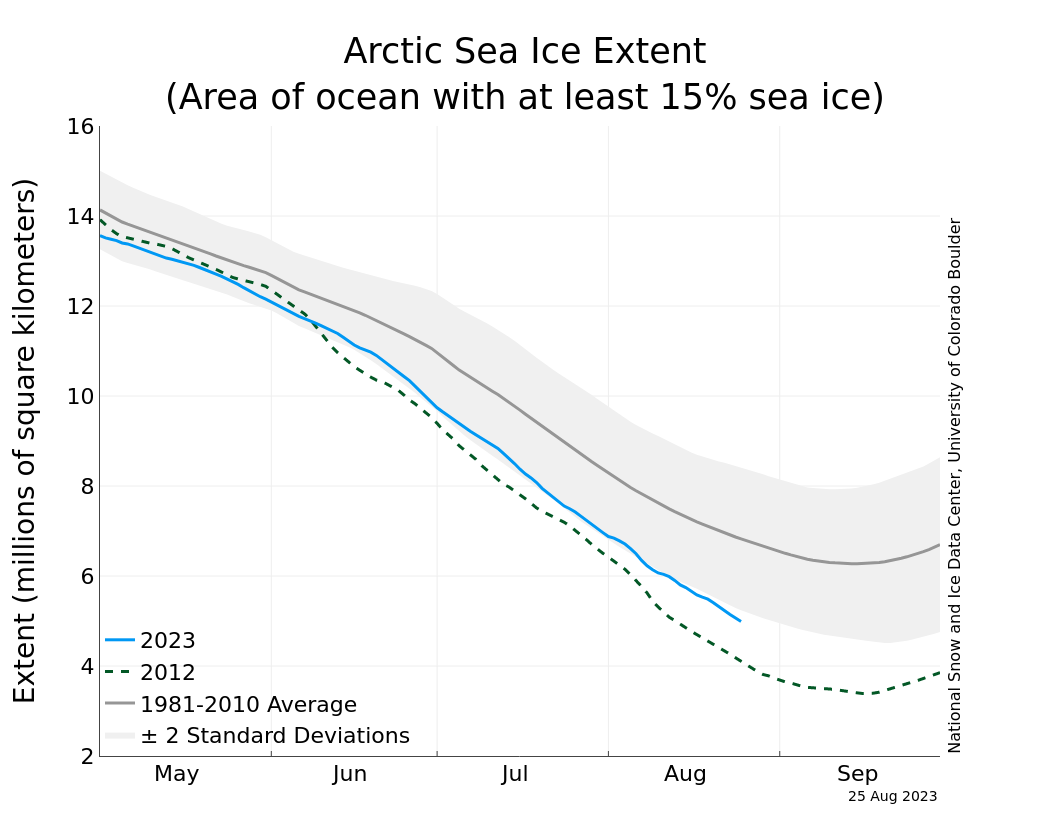 The summer melt has exceeded climate model projections, and an article in the journal Nature suggests that may be because models aren’t yet perfectly able to recreate the effect of thinning ice.

The Nature article also suggests natural variability may be playing a larger role than expected – an argument often used by those skeptical of climate change to explain recent sea ice decline. For example, some assert that the Atlantic Multidecadal Oscillation – an ocean cyclical pattern – might be the dominant cause of the decline.

Certainly, scientists acknowledge natural variation within the climate system is affecting the region. While new models for Arctic sea ice do a better job than previously, they still struggle to recreate the satellite record of decline – suggesting that natural variability still has a large role to play in deciding conditions. Yet even with this considered, the best guess is that around 60 per cent of the decline over the satellite era is forced by phenomena outside the system – like anthropogenic emissions.

Consequences for the weather

Almost immediately after the record low in Arctic sea ice was announced, and with a few weeks of the melt season probably remaining, a lot of media coverage began focusing on the consequences of sea ice decline. While speculating on extreme or uncertain impacts isn’t that helpful, some predictions are grounded in a fair amount of scientific research.

It is well understood that the loss of ice means that sunlight, which previously would have been reflected back out to space, will instead be absorbed by the darker open ocean. This concept that the reflectivity of earth’s various surfaces alter temperature is called the albedo effect.

The knock-on effects of more open ocean are comparatively less well understood, but lots of research is being done to look at how a warmer Arctic might affect the weather.

For example, the BBC, with help from scientists at the Norwegian Polar Institute, explains that if the warmer water alters the path of the jet stream, rainfall patterns could change. This could bring wetter weather to northern Europe and drier weather to southern Europe.

Other outlets highlight that harsher winters may result from changes in the Arctic. The Met Office warns that as depleted sea ice alters atmospheric circulation, cold easterly winds may become increasingly prevalent over Northern Europe. Preliminary research also suggests that with extra moisture available from the Arctic waters, Europe and North America could face snowy spells.

The direct impacts of a more open Arctic ocean have also come to the fore in a lot of the recent coverage. Notably, Shell’s activities are being closely watched as concerns are raised about new opportunities to extract oil and gas in the seabed.

Shell’s first attempts to drill for oil off northwest Alaska were halted after a day, stalled by encroaching ice floes. Greenpeace claimed the halt was a “dire warning to [Shell] shareholders and the shareholders of other companies wanting to exploit the Arctic“. The Guardian reports the firm has now abandoned efforts to drill until next year, after it failed to get a permit on environmental protection grounds.

On the same day as Shell ceased their drilling, news broke that a three man sailing expedition had, for the first time, navigated the Northwest Passage. Their mission? “By sailing this newly opened route we hope that our expedition will play a small part in bringing further attention to climate change and contributing to a larger shift in attitudes”.