Trouble could be brewing for the Latin American coffee industry, new research warns, as it faces losses in suitable farmland and declines in important bee species as a result of future climate change.

The total amount of land suitable for coffee farming is expected to fall by between 73% and 88% by 2050, the lead author tells Carbon Brief. On top of this, the number of species of bees – which play a key role in pollinating coffee plants – could drop by as much as 18% because of climate change.

The study is the first to investigate how the both the direct and indirect consequences of climate change could overlap to threaten coffee production, another scientist tells Carbon Brief. Using this approach in future research could help us better understand how climate change threatens other key crops, he says. More than 80% of Latin America’s coffee is grown by smallholder farmers who tend to less than four hectares of land. Research suggests that smallholder farmers are particularly vulnerable to the loss of good farming conditions as a result of climate change.

Climate change poses a double threat to coffee production in the region, explains Dr Pablo Imbach, lead author of the new study published in the Proceedings of the National Academy of Sciences. He tells Carbon Brief:

“We looked for coupled changes in bee diversity, which is responsible for increasing coffee productivity by pollinating coffee plants, and coffee suitable areas under climate change. We found a large reduction in future coffee-suitable areas.”

Climate change is expected to reduce the amount of land suitable for coffee farming by bringing warmer temperatures, increasing the risk of drought and making rainfall more unpredictable, according to the Intergovernmental Panel on Climate Change (IPCC).

The modelling simulations in the study suggest that, under an intermediate emissions scenario (RCP4.5), the total amount of land suitable for coffee production in Latin America is expected to fall by 73% by 2050, when compared to 1950-2010.

And under a high emissions scenario (RCP8.5), with no action to reduce global emissions, land suitable for coffee farming could drop by 88% by 2050, the study says.

The biggest losses of suitable farmland loss are projected for low-lying countries without significant mountain ranges, including Nicaragua, Honduras and Venezuela. This is because some low-lying regions are expected to become too warm to grow coffee under climate change.

Countries likely to benefit include Mexico, Guatemala, Colombia and Costa Rica. These countries all have mountainous regions, which are expected to become milder and, therefore, more suitable for coffee production under climate change.

On top of the loss of suitable farmland, climate change could also jeopardise coffee production by reducing bee numbers, the research finds. Climate change can threaten bees in different ways, including by tarnishing the quality of the pollen on which they feed. 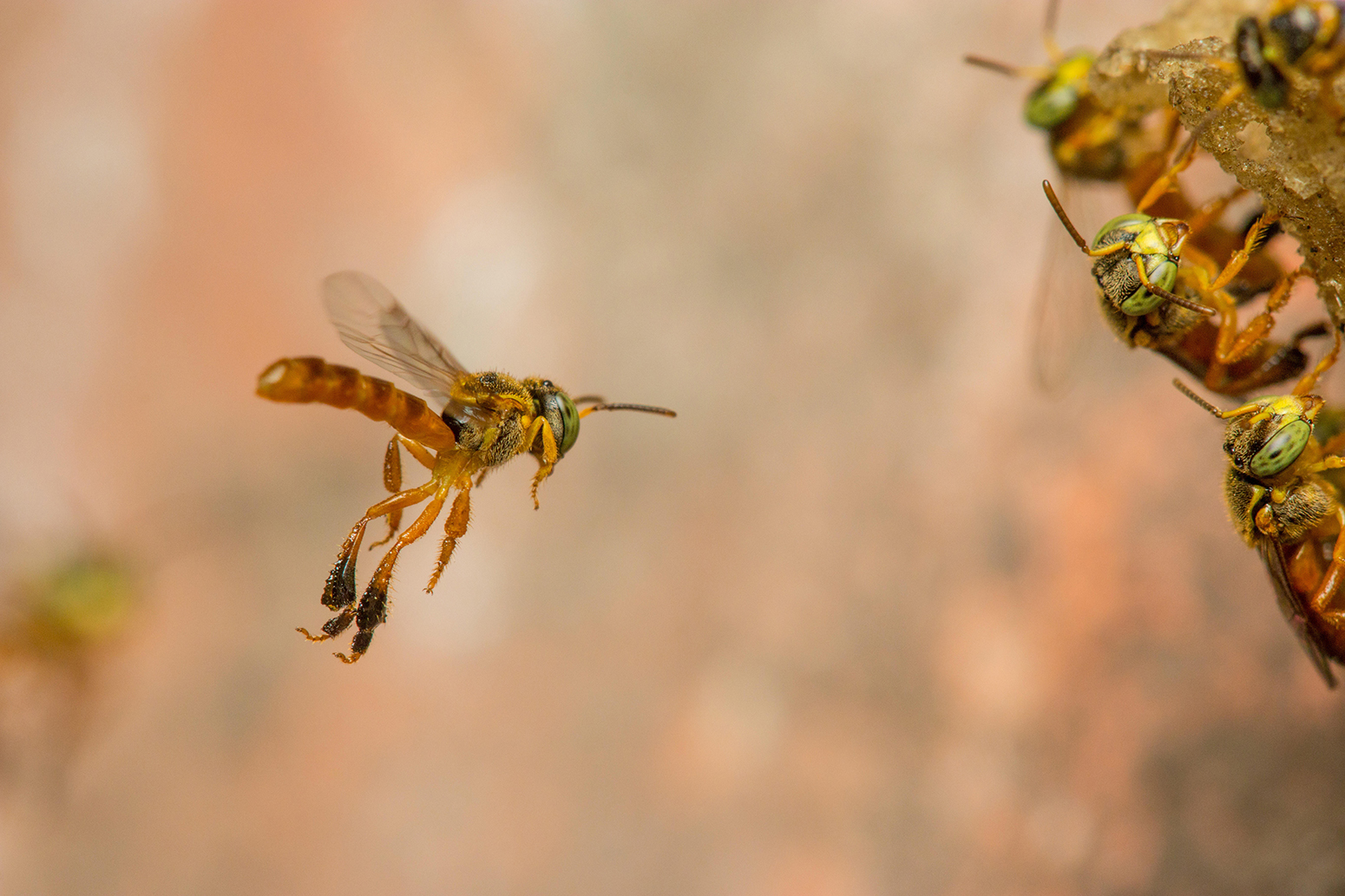 “Bees are vital to the integrity of coffee plots. Without the services they provide through pollination, coffee yields will drop – this will directly affect the incomes of the smallholder farmers.”

The map below shows how the number of bee species is expected to change in Central and South America by 2050 under the RCP4.5 scenario. Dark blue indicates the gain of bee species, while red shows areas of loss. The loss of bee species richness is likely to hit low-lying, tropical regions of Latin America, the map suggests. In these areas, bees may be unable to move to higher ground, where future temperatures are expected to be cooler and more tolerable, Imbach explains:

However, the analysis suggests that, despite losses, future coffee farmland will retain at least some of its native bees, Imbach says:

The study is the first to investigate how climate change could both directly (through suitable farmland loss) and indirectly (through pollinator decline) threaten future coffee production, says Dr Raf Aerts, a researcher from the University of Leuven who was not involved in the new study. He tells Carbon Brief:

This approach allowed the researchers to simulate how the dual effects of farmland and pollinator loss overlap in different parts of the continent.

They find that some parts of the continent, including in Honduras and southern Mexico, are expected to experience a loss in farmland and bee species richness. This could make coffee production impossible for many smallholder farmers, Imbach says.

However, in other regions, the picture is more complex. For example, in parts of western Colombia, the amount of farmland is expected to increase, while bee diversity is expected to fall.

In these regions, careful farming practices could help smallholders to keep their livelihoods, Imbach says.

“This work should help the coffee sector to improve management practices on farms so that bee populations can thrive. But also the research points to the need to conserve bee habitats off-farm – typically tropical forests – so that bees can continue to provide these vital services to millions of smallholder coffee producers.”

The research shows that future strategies for tackling the effect of climate change on coffee production need to account for more than just expected changes in temperature in rainfall, says Aerts.

“The next step would be to include climate change scenarios of changes in coffee insect pests and diseases, as these are also expected to shift under climate change.”