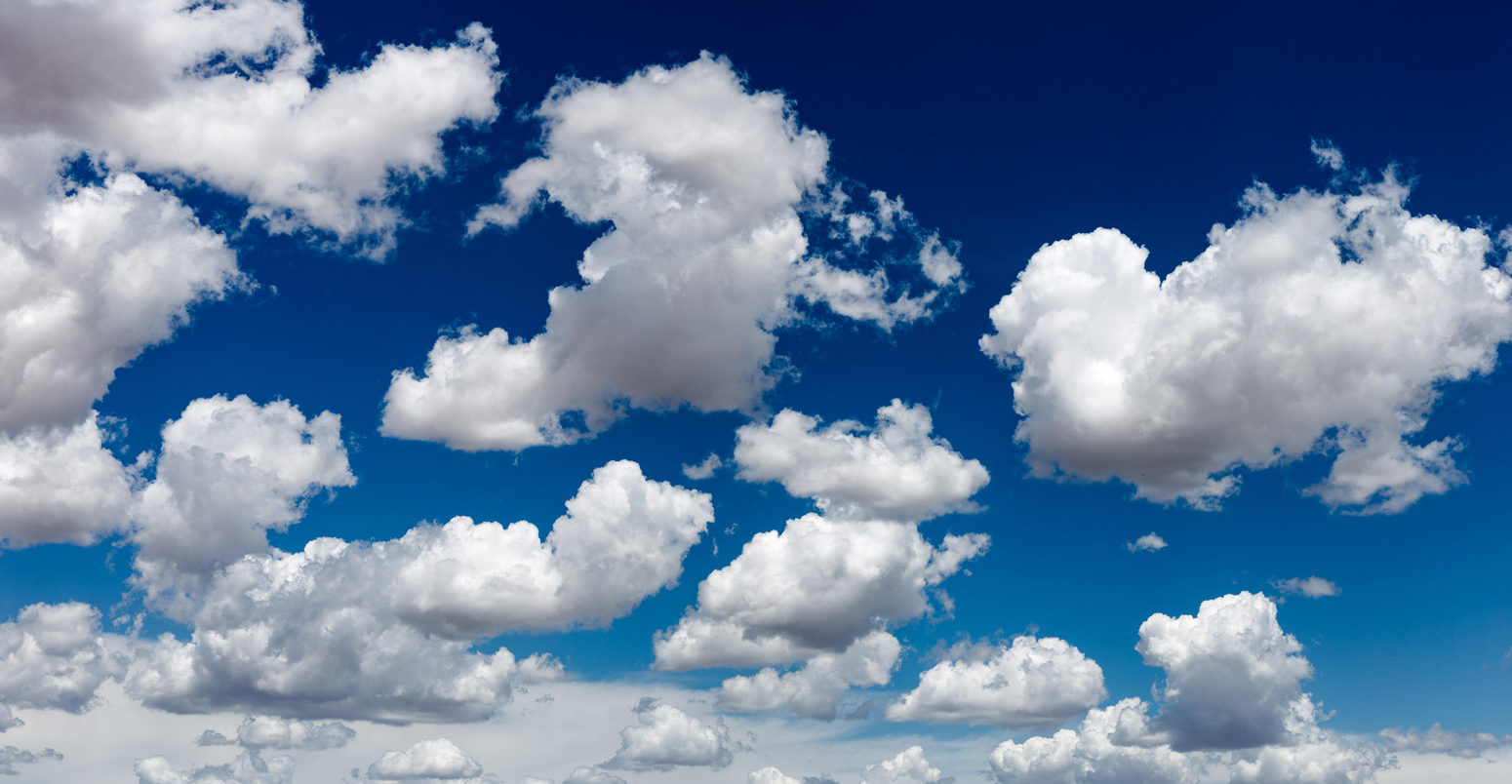 Clouds could have a greater cooling effect on the planet than climate models currently suggest, according to new research.

The paper, published in Nature Climate Change, aims to correct a “long-standing” and “unaddressed” problem in climate modelling – namely, that existing models simulate too much rainfall from clouds and, therefore, underestimate their lifespan and cooling effect.

The authors have updated an existing climate model with a more realistic simulation of rainfall from “warm” clouds – those that contain water only, rather than a combination of water and ice. They find that this update makes the “cloud-lifetime feedback” – a process in which warmer temperatures increase the lifespan of clouds – almost three times bigger.

The authors note that the newest generation of global climate models – the sixth Coupled Model Intercomparison Project (CMIP6) – predicts faster future warming than its predecessors. This is largely because the new models simulate a smaller cooling effect from clouds.

However, the lead author of the study tells Carbon Brief that fixing the “problem” in rainfall simulations “reduces the amount of warming predicted by the model, by about the same amount as the warming increase between CMIP5 and CMIP6”.

Due to this, he says that the key takeaway from the study is to “take the extra warming in CMIP6 with a grain of salt until some of the other known cloud problems are also fixed in the models”.

The impact of clouds on global temperature is a complex area of research that scientists have been working on for decades.

In a Carbon Brief guest post published in 2018, Prof Ellie Highwood – professor of climate physics in the Department of Meteorology at the University of Reading – explains how clouds can affect global temperatures:

“Low, bright clouds have a largely cooling influence because they reflect sunlight away from the Earth’s surface. High, thin clouds composed of ice crystals are more or less transparent to sunlight, but do absorb outgoing infrared radiation, re-emitting a small fraction and, thereby, warming the planet. What makes things even more complicated is that, in most places, there are multiple layers of cloud at any one time.”

In the piece, Highwood concludes that clouds have an overall cooling effect on the planet. She also outlines the extensive work that climate scientists have carried out to simulate cloud processes more accurately, but notes that clouds are still “the most intriguing and challenging components of the climate system”.

As the climate warms, scientists expect many clouds to transition from “cool” to “warm”. Cool clouds are made up of a mixture of ice particles and water droplets, while warm clouds contain only liquid. This phase transition will affect the cooling properties of clouds in two main ways.

First, the water droplets in clouds are usually smaller than the ice particles, giving them a larger surface area to mass ratio and allowing them to reflect sunlight more easily. This means that as clouds transition from cool to warm, they become more reflective. The paper calls this the “optics component” of the phase feedback.

Second, warm clouds are less efficient at precipitation – meaning that they do not begin to release raindrops as readily as cold clouds. By raining less often, warm clouds achieve a longer lifespan – this is called the “lifetime component” of the phase feedback.

Dr Kate Marvel, an associate research scientist at Columbia University and the NASA Goddard Institute for Space Studies, who was not involved in the study, tells Carbon Brief that, due to the optics and lifetime components of the cloud feedback, “if you make the clouds more liquid, they block more sunlight and last longer”.

The study notes, however, that there are many “pervasive” and “unaddressed” issues in climate models surrounding cloud processes.

The authors highlight that many models in the fifth Coupled Model Intercomparison Project (CMIP5) overestimate the reflectiveness of warm clouds (the optics component), while underestimating their lifespan (the lifetime component).

Dr Johannes Mülmenstädt is an Earth scientist in the Atmospheric Sciences & Global Change division at the Pacific Northwest National Laboratory, and lead author of the study.  He tells Carbon Brief that in the 2010s, a number of studies were published “showing that climate model clouds contain far more ice than satellite observations support” – indicating that CMIP5 models were underestimating the amount of liquid contained in clouds.

Climate modellers around the world took notice of these papers and set about updating their models. When the subsequent suite of models – the sixth Coupled Model Intercomparison Project – were released, many included a greater cloud liquid fraction.

This change in cloud modelling had the knock-on effect of increasing the “equilibrium climate sensitivity” – the amount of warming that the planet will see in response to a doubling of CO2 levels – in many CMIP6 models.

Mülmenstädt explains that this was “one of the big surprises coming out of CMIP6”, and was “in large part” due to changes in modelling extratropical, low clouds over the Southern Ocean. Marvel confirms that “most of the increases in climate sensitivities between CMIP5 and CMIP6 climate models come from changes to how models simulate clouds”.

However, the representation of warm clouds in CMIP6 models is still imperfect. In this study, the authors highlight a significant “error” in cloud rainfall processes – that warm clouds in CMIP6 models produce too much rain. To show the extent of the error, the authors update an existing climate model to include a more accurate warm-rain probability and then compare its results to the original model.

They find that the “cloud-lifetime feedback” – the process which causes warmer clouds to rain less easily – could be nearly three times bigger than suggested in the existing models. This means that warm clouds in CMIP6 models precipitate too easily and have too short a lifespan, causing the models to underestimate the cooling effect of clouds in the climate system.

Mülmenstädt emphasises that fixing this cloud-lifetime effect could have as great of an impact on future warming predictions as the change from CMIP5 to CMIP6 models did:

“Liquid clouds in climate models rain too much. We found that fixing that problem in the model we studied reduces the amount of warming predicted by the model by about the same amount as the warming increase between CMIP5 and CMIP6. So the main message is: take the extra warming in CMIP6 with a grain of salt until some of the other known cloud problems are also fixed in the models.”

Dr Tapio Schneider, a senior research scientist from NASA’s Jet Propulsion Laboratory who was not involved in the research, tells Carbon Brief that the paper “adds to a long line of research showing that clouds are complicated and climate models simulate them poorly”.

To correct the simulated rainfall processes, the authors focus on an existing climate model from the CMIP6 ensemble. The maps below show the “warm-rain fraction” – the fraction of rain occurrences that are driven by non ice‐phase processes in clouds – in this model.

The maps show that the majority of warm-rainfall processes occur near the equator, where temperatures are highest, and that they are particularly prevalent over the ocean. As the planet warms, the increase in warm-rain fraction is particularly pronounced in the southern hemisphere mid-latitudes, while it is expected to drop over the sea at low latitudes.

The authors correct the rainfall processes by using satellite data to determine how much rain falls from clouds in the present-day climate. They then modify the warm-rain processes in the climate model to match up more accurately with the satellite-observed probability of rainfall.

The plot below shows the probability of rainfall from warm clouds at different latitudes, as observed using satellite data (grey), and modelled using the original model (red) and updated model (yellow).

Using observations to constrain clouds processes, as well as cloud state, “is a necessary step towards reliable climate projections”, according to the paper. Mülmenstädt tells Carbon Brief that this method could inform the way that scientists use observations to increase model accuracy in the future:

“We, as a field, need to figure out how best to use observations to reduce the ‘wiggle room’ that models currently have in how they represent cloud processes. The observations we currently have mostly give us snapshots of cloud state. But the way models think about clouds is in terms of their dynamics – how quickly are they forming, or raining out, or evaporating.”

He adds that climate scientists need to think make sure that they can get the appropriate data to conduct this kind of study:

“The satellite that made this study possible is one-of-a-kind and has been soldiering on since 2006, long past its design lifetime, thanks to the amazing efforts of NASA to keep it up and running. If we lose this type of observing capability, or if the gaps between observations become too large, a lot of our science will become even harder than it already is.”

Schneider tells Carbon Brief that the paper highlights data sources that can be “exploited fruitfully” for future studies. He adds:

“Answering the question of what controls cloudiness is crucial to be able to understand, or rule out, the strongly amplifying cloud feedbacks on global warming seen in recent climate models The results here show that answering this question necessarily involves better constraints on how easily clouds precipitate as they warm.”

Dr Alejandro Bodas-Salcedo from the UK Met Office, who was not involved in the study, says that the paper is “very exciting” and “highlights the importance of precipitation processes for cloud radiative feedbacks”.

However, he notes that as the study only tests a single model, “the robustness of their headline claim will have to be tested in a multi-model framework” as a next step.