The environmental argument for the HS2 high speed rail link could be weakened if we keep generating electricity from fossil fuels, according to official documents. Government claims about the carbon benefits of the scheme rest on the assumption that emissions from the power sector dramatically reduce over the next fifteen years – and that might not happen.

MPs are due to vote today on the proposed high-speed rail link to the north of England – the culmination of a political battle to persuade reluctant MPs to support the scheme. More than 30 Tories are likely to rebel, abstaining or voting against the scheme, the BBC reports.

MPs are doubtful about the economic benefits of the scheme, and wary about the disruption it may cause. The project’s environmental benefits are also worth scrutinising, however.

The government claims HS2 will help the country reduce greenhouse gas emissions. But coalition battles over energy policy, and George Osborne’s plans to bump up the amount of power sourced from gas, mean emissions from HS2 may be higher than it suggests.

The government’s climate case for HS2

Taking the train is less carbon-polluting than flying or driving. A “modal shift” to rail will reduce emissions, the government says. It will make the transport system as whole less climate-polluting by increasing the total carrying capacity of the rail network for passengers and freight.

It argues HS2 will play a “key part in the UK’s future low carbon transport system” and will “support” the government’s overall carbon objectives. The scheme will save about three million tonnes of carbon dioxide emissions over its sixty-year lifetime, according to government calculations.

The Department for Transport (DfT) has modelled the impact of the first part of the line – running from London to the West Midlands. Its modelling is based on two scenarios – scenario A and scenario B – as the following table shows:

In both scenarios there is a reduction in carbon emissions as a result of the London to Birmingham train line.

Not all of the savings come from the shift in methods of transport, however. About a sixth of the saving comes from the government’s plans to plant more than four million trees along the route, in order to help it blend into the countryside.

There is another qualification. High speed rail is powered by electricity. The more fossil fuels are relied on to generate that electricity, the higher carbon it will be. And the DfT’s modelling appears to assume that carbon dioxide emissions from the power sector fall dramatically over the next fifteen years.

In scenario A, power sector emissions reduce to about 100g/Kwh by 2030. The projections are illustrated in the following graph: 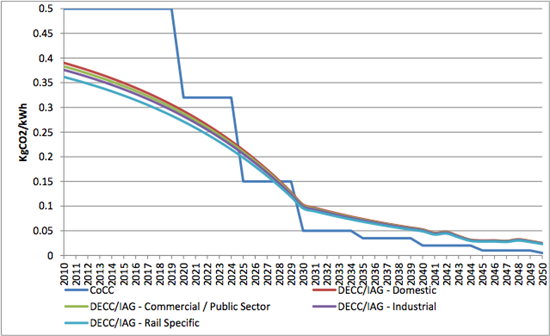 The suggestion that power sector emissions will be reduced to 50g/Kwh by 2030 is in line with a recommendation from government advisor the Committee on Climate Change (CCC). If the government’s going to hit its to meet its climate objectives under the climate change act, the power sector needs to be “virtually decarbonised” by 2030, according to the CCC.

The Department for Energy and Climate Change (DECC)’s projections are less ambitious, however. Under its ‘ central‘ projection, DECC suggests power sector emissions will be reduced to 100g/Kwh by 2030.

The idea that power sector emissions can be reduced this dramatically over the next fifteen years has attracted a great deal of political controversy. Last year MPs rejected a proposal that a target be set requiring decarbonisation of the power sector by 2030.

At the end of 2012, George Osborne announced a new government strategy aimed at encouraging companies to generate more power from gas. The document contains a suggestion that the UK could construct an extra 40 new gas plants – or 37 gigawatts of gas power –  by 2030. That would mean reducing emissions to 200g/Kwh by 2030 – and in turn, undermining the assumptions behind the DfT’s HS2 modelling.

Benefits reduced, but not eliminated

A failure to decarbonise wouldn’t necessarily mean the HS2 project would increase the country’s carbon emissions. A report commissioned by various NGOs found that a scenario in which the UK built more gas plants reduced carbon savings from the London to Birmingham line by two thirds, but didn’t negate them entirely.

But there are concerns. Last year, Tim Yeo MP, chair of the Parliamentary Energy and Climate Committee wrote to the DfT expressing concern that a failure to decarbonise the electricity system will undermine the environmental case for HS2 – and asking if the DfT has any “contingency plans” in place in case it doesn’t happen. It’s not clear whether the government has any.