Over recent decades, inequality between countries has fallen, in particular due to fast economic growth in China and India. But our new research suggests climate change could reverse this trend.

In addition to socioeconomic evolution regarding demography, education and technological progress, climate change will affect how inequality between countries changes in the future.

Impacts of climate change disproportionately hit the poorest countries, while the costs of greenhouse-gas reduction will also be unevenly distributed.

In an article recently published in the journal Climatic Change, we build scenarios that account for uncertainties regarding these dimensions. This allows us to analyse the prospect of future inequality between countries in the 21st century, under varying levels of climate change.

We find that climate change could reverse the declining trend of recent decades, particularly if the economic damages due to warming are high. This could lead to a rise in inequality in the course of the 21st century.

The results show that efforts to mitigate climate change are key, as lower emission pathways show lower inequality levels and can delay the date when inequality starts rising again. However, mitigation can also add to the problem if mitigation costs disproportionately fall on the poorest.

The world today is less unequal than it was in 1990. As shown in the chart below, economic growth in China (red), India (orange) and other Asian countries (yellow) explains the observed decline in inequality.

Changes in global income distribution between countries, from 1988-2011. Asian countries are shown as shades of yellow and red. Developed countries are in blue. Income is shown on a logarithmic axis as yearly GDP per person, adjusted for inflation and price differences between countries (PPP-adjusted US$(2005)). The area under the graph corresponds to the relative population size in each country or region. Source: OurWorld in Data.

Socioeconomic and climate systems are intertwined. For example, the rising wealth of China since the turn of the century has been powered by a rapid expansion in coal-fired electricity generation.

We set out to explore how these interlinkages would continue to evolve over time, depending on the future pathway for climate change and socioeconomic development.

Socioeconomic development drives energy demand and land-use change, which both can generate greenhouse-gas emissions, depending on policy choices. These emissions warm up the atmosphere, leading to physical climate change impacts, changes in temperature, precipitation patterns and sea level rise, which affect socioeconomic systems in turn.

Uncertainties are associated with every step of this chain of causation and interaction, which is shown in schematic form in the figure below.

The evolution of socioeconomic factors, such as population, education, technology and the availability of fossil fuels, will play a key role in what the future will be. These factors will enable the economic development of future countries, driving their energy and land uses – and their resulting emissions.

In each of these socioeconomic pathways, we consider different emissions pathways. Policies can be implemented to reduce greenhouse-gas emissions and reach stringent global climate targets.

These policies are costly, with their cost varying from one narrative to another. It is easier to reduce emissions in a world where energy demand is low, and where we assume fast technological progress. Integrated assessment models (IAMs) are used to quantify these mitigation costs and to assess how those differ according to assumptions of future socioeconomic pathways.

In the study, we consider five socioeconomic pathways (SSP) – and for each of these, between three and five emission pathways. First, a baseline in which there is no policy to reduce emissions. Second, a series of lower emissions scenarios matching the Representative Concentration Pathways (RCP), for which the mitigation costs are assessed by up to four different IAMs.

Once we have our set of greenhouse-gas emission pathways and mitigation costs, we then move on to investigating the economic damages due to warming. (There is uncertainty in how much warming to expect from a given level of emissions, which we also explored in our study.)

The impacts of warming fall more heavily on the poorest countries, which are more exposed to water stress, extreme temperatures and other changes because of their locations. They also feel any impacts more keenly, due to the structures of their economies and lower quality infrastructure.

The economic impacts are also uncertain, with cost estimates varying greatly according to the methodology used. To assess the potential range of damages, we consider eight estimations of country-by-country impacts. In total, we build 3,408 scenarios that span uncertainties along the different dimensions.

We find that of all the uncertainties we considered, the socioeconomic and damage estimate dimensions are the primary drivers of future inequality between countries.

This is clear in the figure of our results, below, showing how inequality between countries (“Gini index”) changes in the future, depending on the different socioeconomic pathways (the numbered SSPs in each chart) and between the highest damage estimates (red) versus the lowest (blue).

Evolution of the Gini index in the 21st century for different socioeconomic pathways, numbered SSP1-5, and under different estimates of climate change damages (red = highest and blue = lowest). The Gini index measures the gap between the actual distribution of national income, and an egalitarian situation where all countries have the same GDP per capita. For each damage estimate, the solid line represents the average value and the dotted lines is the uncertainty range. Under the highest damage estimates, inequalities rise again as climate change impacts unfold, regardless of socioeconomic pathway. Data source: Taconet et al (2020).

If the economic damages from climate change are in line with the highest estimates, then we find that warming would reverse gains in declining inequality over the past few decades. Instead, there would be a rise in inequality between countries in the course of the 21st century.

If the economic damages are lower, then cutting emissions still reduces inequality in some combinations of socioeconomic pathway, mitigation costs and their distribution.

This suggests that climate change mitigation is key to limiting future inequality, provided that mitigation costs do not fall too heavily on the poorest countries.

In our study, we focus on income inequality between countries, as measured via the Gini index. However, other forms of inequality are also important to consider in the analysis of different emission pathways.

In particular, inequality between individuals within countries have increased in the last decades and could be exacerbated by warming because lower-income households are more vulnerable to climate change impacts. Conversely, mitigation policies, if poorly designed, can disproportionately  hit the poorest households, thereby increasing inequalities.

Nevertheless, we show that climate change will be an important driver of future inequality. More research is needed to further understand how inequality at different levels may evolve under different mitigation pathways. 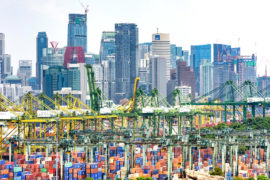