Dr Joeri Rogelj is a lecturer in climate change and the environment at the Grantham Institute at Imperial College London and a senior research scholar at the International Institute for Applied Systems Analysis. He was a coordinating lead author on chapter two of the Intergovernmental Panel on Climate Change (IPCC) special report on 1.5C and is a lead author for Working Group One on the IPCC’s forthcoming sixth assessment report.

Scenarios used in climate policy often suggest very risky strategies for tackling warming that are at odds with the letter of the Paris Agreement.

These scenarios attempt to map out the different ways that human development and societal choices could affect each other and the natural world, while keeping warming within agreed limits.

Yet they tend to put a strong burden on future generations and vulnerable populations by delaying action, allowing near-term warming in excess of those limits and then relying on negative emissions techniques later, to undo their initial shortfall in emissions reductions.

In a new study published in the journal Nature, we present a new way of designing climate change mitigation scenarios that removes this implicit intergenerational bias and closely mirrors the intentions of the Paris Agreement.

Regular readers of Carbon Brief will by now have understood that the world of climate change scenarios provides endless opportunity for interesting discussion, strong opinion, and lively – but not always equally well-informed – debate.

Some scenarios are seen as having emissions that are too high to be considered reasonable or requiring potentially impossible amounts of negative emissions to achieve the Paris Agreement warming limits. Others are viewed as not radical enough to tackle the unfolding climate crisis, or simply being a bunch of confusing lines on a “spaghetti graph”.

If you want to experience the academic equivalent of a pub brawl, please do mention scenarios at your favourite climate change conference and then carefully – and quickly – step back to observe.

This of course should not come as a surprise. Scenarios are “stories of what happened in the future”. Their aim is to stimulate exploration, understanding and discussion. Their assumptions are there to be scrutinised, their narratives to be debated.

The new scenario logic we present in our new study criticises and resolves one key structural element of current scenarios: their strong focus on climate outcomes in the year 2100.

The latter design choice was included in the “SSP-RCP scenario matrix framework”, the set of potential future pathways that most researchers use to ensure their work is comparable between groups. This means it has come to dominate how research teams design their climate change mitigation scenarios.

As a result, pathways focus on reaching a specific level of warming or climate “forcing” by 2100, or keeping the total amount of cumulative CO2 emissions to a specific limit by the end of the century.

However, this seemingly innocuous, technical choice has strong implications for the characteristics of mitigation scenarios – and thus also for the policy advice derived from them.

Translated in lay terms, the choice of designing scenarios with an end-of-century focus means that modellers run their models, asking them to provide the cheapest way of hitting a climate target in 2100 – irrespective of the risks or warming over the course of the 21st century.

Integrated Assessment Models (IAMs) are often used to create quantitative climate change mitigation scenarios. They do this by looking at the energy technologies, energy use choices, land-use changes and societal trends that cause – or prevent – greenhouse gas emissions.

When IAMs create scenarios with a climate goal set for 2100 only, this tends to result in pathways that delay emissions reductions over the next decades – typically breaching the 2100 target during that period – before relying on the large-scale global deployment of net-negative emissions technologies or CO2 removal to make up for the initial shortfall.

This is evidently a double whammy in terms of climate risk. First, these scenarios give the obviously wrong suggestion that the best way of limiting warming to a specific safe level would be to exceed it first – venturing into the area that one intends to avoid in the first place.

Second, the large-scale deployment of negative emissions technologies is far from certain, with recent reports suggesting more modest deployment of a wider range of technologies might make more sense when considering impacts on biodiversity and other sustainable development goals. Relying on a massive deployment later in the century is widely accepted to be a very risky strategy.

Finally, temporarily crossing the temperature limits set by the Paris Agreement, before trying to return below them at some later point in the future, might also be inconsistent with the actual text of the deal, as well as a reasonable interpretation of what it means.

The scenario logic we present in our new study aims to resolve these issues by imposing a limit on peak warming and the temperature evolution thereafter. This logic builds more directly on the text of the long-term temperature goal of the Paris Agreement, which aims at limiting warming well below 2C relative to pre-industrial levels, and preferably 1.5C.

The technical implementation of this new scenario logic is simple and integrates the by now well-established knowledge of carbon budgets. (These are the total amounts of CO2 that can be released over time by human activities while staying within a given temperature limit.)

Our logic explicitly fixes three pathway characteristics that define the evolution of temperature over time, illustrated in the schematic, below. Schematic of our new scenario logic defined by three parameters: The timing of net-zero, the cumulative CO2 emissions until that point and the amount of net CO2 emissions thereafter. Figure simplified from Rogelj et al. (2019).

Having introduced this new scenario logic, the obvious question becomes: what difference does it make? It can arguably make a world of difference in how the climate change mitigation challenge is perceived.

Let’s take a look at some critiques of IAM pathways and how our new scenario logic helps to clarify that many of these issues are actually a scenario design problem.

Stringent IAM scenarios that limit warming to 1.5C or well-below 2C have often been presented as unavoidably relying on substantial amounts of net-negative emissions. Our new logic shows that this is merely an artefact of the focus of scenarios on end-of-century outcomes.

Scenarios that keep warming to well-below 2C, without the reliance on net-negative CO2 emissions in the long term, can be constructed easily with standard IAMs on the basis of our new logic. The chart below shows how such scenarios (pink lines) contrast strongly with those designed according to the usual end-of-century focus (dashed blue lines). Global CO2 emissions in IAM pathways that limit warming to well-below 2C. Those developed according to our new scenario logic are shown with pink lines while those with the standard end-of-century focus are in dashed blue. Figure adapted from Rogelj et al. (2019).

Reliance on net-negative CO2 emissions in the second half of the century is thus not unavoidable in IAM pathways, but can be set as an explicit choice, in light of intergenerational fairness and risk. Avoiding this reliance requires pathways with deep emission reductions over the coming decades.

This new logic doesn’t eliminate all of the issues raised by negative emissions, because CO2 removal measures are still being deployed in our scenarios to compensate for ongoing emissions in other sectors.

However, here too the logic allows us to explore variations in the overall reliance on CO2 removal, independent from the resulting temperature outcome.

The figure below shows how an emissions trajectory that is firmly compatible with stabilising warming at no more than 1.6C (top-left panel) can be achieved in a variety of different pathways, some of which use large amounts of carbon capture and storage (CCS, top-right) and some of which use barely any (bottom-right). By explicitly separating temperature trajectories from the level of reliance on negative emissions, our logic allows trade-offs between climate goals and  sustainable development to be explored in a much more targeted way.

A final way in which scenarios created with the new logic differ from those with an end-of-century perspective is the distribution of costs and carbon prices over time.

IAMs that optimise the future transition of the energy-economic system with “perfect foresight” are typically said to produce exponentially increasing carbon price paths that start low and rise over time. Our new logic illustrates that this characteristic is also highly dependent on scenario design.

The best illustration of this is the figure below, showing two scenarios created with exactly the same IAM (the MESSAGE-GLOBIOM model) and exactly the same socioeconomic assumptions (SSP2, see this explainer). The sole exception is that two different scenario design logics were applied.

This features a much higher carbon price in the near term and until net-zero CO2 emissions are achieved. Thereafter, the carbon price is strongly reduced, which indicates that once the transformation to a low-carbon or carbon-removing society is achieved, there are few additional costs in maintaining it. 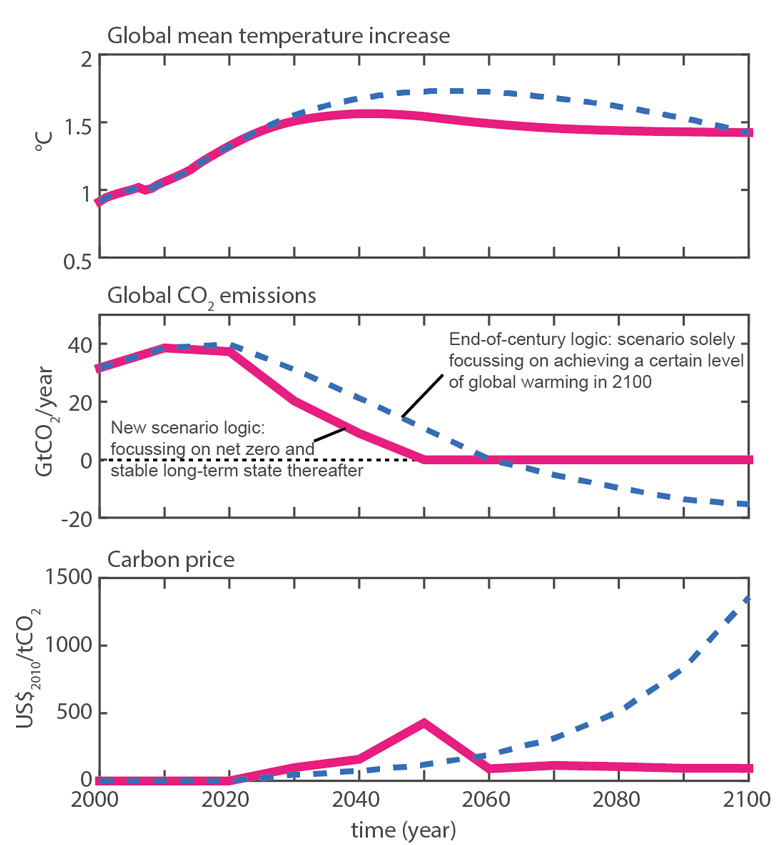 Comparison between warming this century (top panel), global CO2 emissions (middle) and the carbon price (bottom) in two scenarios that differ only in their design logic. The dashed blue line shows a scenario designed to limit warming in 2100 to no more than 1.5C while the pink line accords with our new logic, limiting peak warming to 1.5C. Figure created by the author for this guest post from data published together with Rogelj et al. (2019).

In the paper we also show that a similar message emerges for mitigation investments over time. Once the transition to a net-zero or net-negative global economy is achieved, there are virtually no new investments needed beyond those that would be included in a scenario with no climate policy and high emissions.

The hope is that this new scenario logic will be taken up by the modelling community when new scenarios are being developed. This would help the scenario literature to become increasingly useful to inform global and national climate action.

Finally, the new scenario logic reinforces what many intuitively understand: that halting climate change at safe levels needs urgent and steep emissions reductions over the next years and decades. Only once global near-zero CO2 is achieved can a conversation be entertained about how quickly and how far the world would like to try to reverse warming.