Warming of the world’s oceans has caused the total amount of fish that can be caught sustainably to fall by an average of 4% globally since the 1930s, a study finds.

Damage to harvests has been particularly severe around the UK in the North and Irish seas, the data shows, where the maximum sustainable yield has dropped by up to 35%. Fish particularly affected in the North Sea include Atlantic cod, sole and haddock.

The risk posed by warming is compounded by overfishing, which presents “a one-two punch” for fish, the lead author tells Carbon Brief. “Overfishing makes fisheries more vulnerable to warming, and continued warming will hinder efforts to rebuild overfished populations.”

The findings show that the threat of climate change to the world’s fish stocks is “not something for the distant future”, another scientist tells Carbon Brief.

Climate change is causing ocean temperatures to rise at an increasingly rapid rate, research shows. This warming is having a striking impact on marine life, including by driving mass coral bleaching and increasing the chances of deadly marine heatwaves.

The new study, published in Science, looks back from 1930 to 2010 to see how ocean warming has impacted commercial fish stocks. It covers more than 235 economically important populations of fish in 38 world regions.

To do this, the researchers estimated how warming has influenced the “maximum sustainable yield” – the total amount of fish that can be taken by fishing without reducing the stock for the next year – for different populations across the world.

“We used maps of ocean temperature over time to see if ocean warming has influenced the growth of 235 marine fish and invertebrate populations around the world.

However, it is important to note that the study was not able to investigate the impact of warming on every fish stock, he says:

“It’s important to be clear that we couldn’t assess all fisheries globally and were only able to assess a large sample. The populations we assessed generate a third of global catch.”

(Fish missing from the analysis include those that are relied on for smallholder fishing in tropical regions, he says. This is because historical data for these populations is scant.)

It is also worth noting that the study does not look at all the ways that climate change can impact fish. For example, the research does not consider the impacts of “ocean acidification”, which occurs as seawater absorbs CO2, or “ocean deoxygenation”, the loss of oxygen from parts of the sea.

The chart below indicates the influence of warming on each of the 28 fish stocks. The measure displayed on the y-axis represents how much maximum sustainable yields would change with each degree of global warming, Free explains:

The results show that fish populations close to the UK, including in the North and Irish Seas, are the most affected by ocean warming. Fish particularly impacted include Atlantic cod, sole and haddock.

This could be because ocean warming has caused a decline in the availability of “zooplankton” – microscopic marine animals which fish feed on – in the North Sea, Free says:

The North Sea is home to one of the world’s largest cod populations. This stock is particularly important to countries in Europe, including the UK, Denmark, Norway and Germany. 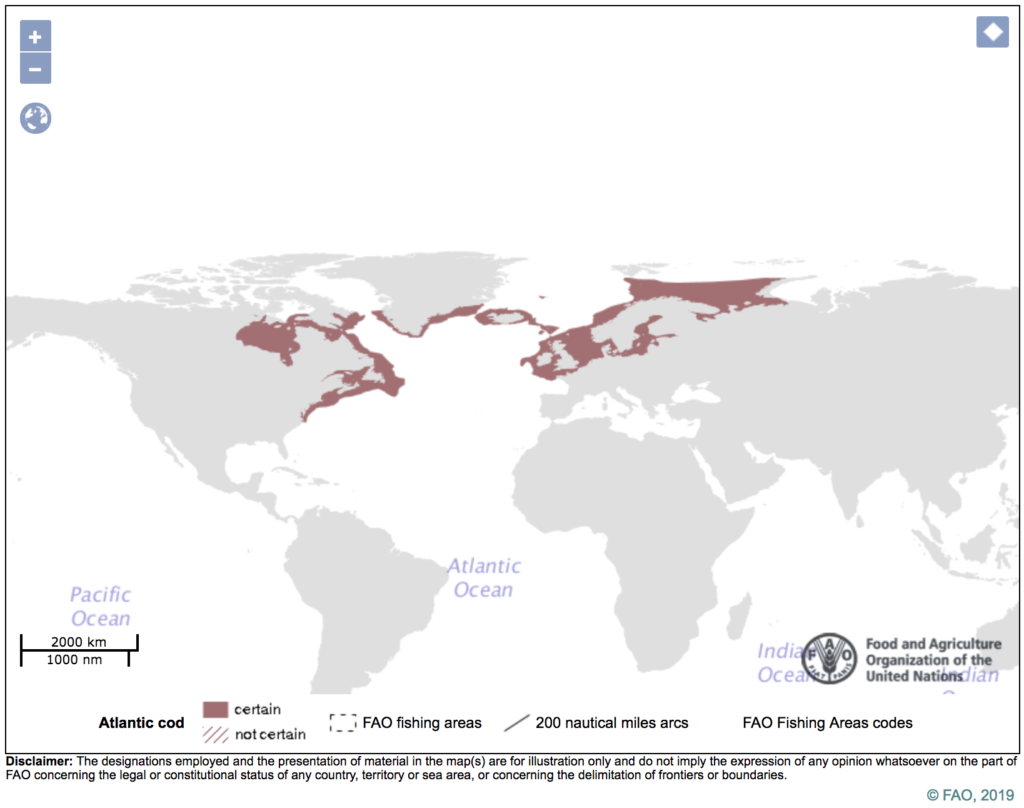 By contrast, the population of cod in the Northern Gulf of St Lawrence, which could have benefited from ocean warming, is an important stock for Canada.

Cod in this gulf could have benefited from warming because waters here are relatively cool, meaning small temperature increases could make conditions more favourable in the short term, Free says:

“We see evidence that populations living at the cool end of their range have benefitted from warming – but this benefit is unlikely to persist if continued warming pushes these population past their temperature tolerance.”

The map below, which is taken from the paper, gives an indication of how ocean warming has impacted sustainable fish yields in different world regions.

On the map, blue indicates a positive percentage change in maximum sustainable yield between the periods 1930-39 and 2001-10, while red indicates a negative percentage change. The size of the circle gives a picture of the size of the fish stocks (in millions of tonnes), while the number inside the circle shows the number of populations in the region.

The impact of ocean warming on global fish stocks. Blue indicates a positive percentage change in maximum sustainable yield between the periods 1930-39 and 2001-10, while red indicates a negative percentage change. The size of the circle represents the size of the fish stocks (in millions of tonnes), while the number inside the circle shows the number of populations in the region. Dotted lines indicate major world fishing regions. Source: Free et al. (2019)

Another finding of the results is that populations that have suffered from overfishing were more likely to be threatened by ocean warming. Overfishing occurs when fishing fleets take more fish than is sustainable. At present, around one-third of the world’s fish stocks are overfished, according to the FAO.

One reason that overfishing could make fish more vulnerable to warming is that the largest and most healthy fish tend to be taken – and they are the ones most likely to be able to withstand warming, Free says:

This finding is important, but it may be too early to say there is a causal link specifically between overfishing and warming, says Dr Thomas Cameron, a fish ecologist from the University of Essex who was not involved in the study. He tells Carbon Brief:

“Populations that were found to have responded negatively to temperature were also slow growers, large and of a greater total biomass and found mainly in Europe or the China and Japanese seas. [These] traits would attract fishing pressure. So, it’s not yet clear if the association between fishing and warming is shown to be mechanistic or caused by correlation.”

Overall, the findings show how warming can impact commercial fish populations, he adds:

“This work provides compelling evidence that there are dangers to marine food production from warming seas – at least over the scale of 10-15 years. Whether fish population movement [into] new areas can overcome this remains to be seen.”

The research reinforces the message that climate change is already having a large impact on the world’s fish, says Bryony Townhill, a marine climate change scientist at the UK government’s Centre for Environment, Fisheries and Aquaculture Science (Cefas). She tells Carbon Brief:

“Studies such as this show that climate change is not something for the distant future, but that increasing temperatures are already causing changes in the oceans.”